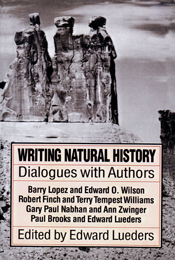 Writing Natural History is the edited record of four public dialogues held at the University of Utah in 1988 between eminent writers in the fields of natural history. In these interchanges the writers discussed their traditions, perspectives, values, purposes, techniques, and personal insights. Their conversations, like their work, link the sciences with the humanities in surprising ways, enhancing our understanding and appreciation of both. This volume maintains the vitality of the spoken dialogues and conveys a lively sense of each speaker’s concern with the processes of the natural world and our human position in it.

Half of the authors began as professionals in the natural sciences before becoming recognized for their literary skills; the other half are established writers whose works reflect their vital human affinity with and respect for nature. Writing Natural History will appeal to all readers involved in conservation, nature study, creative writing, environmental issues, the natural sciences, the outdoors, and the ecological politics of Earth.

Edward Lueders is emeritus professor of English at the University of Utah and a veteran of WW II. He is the author of The Clam Lake Papers and nine other books. Since the 1940s he has also been a professional jazz pianist.

Praise and Reviews:
“Gives the reader a new perspective on this avenue of writing.”—The National Writers Club
“Serves as a sampler: of styles, of perceptions, of world views, from an idea of our place in the universe to the detail of why red chilies grow under red-fruited trees in the Sonoran desert. Reading the words of these very different writers side by side, we get a sense of what nature writers as a group do.”—Utah Humanities News
“Writing Natural History can give us ways to help our students find wholeness. The book shows us the need for, and demonstrates, the connections between science and the humanities.”—Middlebury College, Bread Loaf News
“The challenge of reacting on their feet often sparks electricity among the participants which the reader feels across the page.”—Journal of the Southwest
“Those chosen to participate in these dialogues were not only fine writers but eloquent speakers, and the graceful language is one of several pleasures in the volume.”—Weber Studies
“Satisfactory for most readers will be the spontaneity, the occasional frankness, and the humor. A slender book that should have broad appeal.”—Books of the Southwest