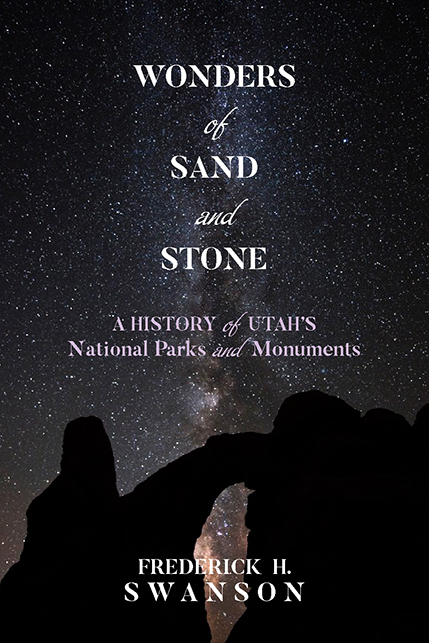 From Delicate Arch to the Zion Narrows, Utah’s five national parks and eight national monuments are home to some of America’s most amazing scenic treasures, created over long expanses of geologic time. In Wonders of Sand and Stone, Frederick H. Swanson traces the recent human story behind the creation of these places as part of a protected mini-empire of public lands.

Drawing on extensive historical research, Swanson presents little-known accounts of people who saw  in these sculptured landscapes something worth protecting. Readers are introduced to the region’s early explorers, scientists, artists, and travelers as well as the local residents and tourism promoters who worked with the National Park Service to build the system of parks and monuments we know today, when Utah’s national parks and monuments face multiple challenges from increased human use and from development outside their borders. As scientists continue to uncover the astonishing diversity of life in these desert and mountain landscapes, and archaeologists and Native Americans document their rich cultural resources, the management of these federal lands remains critically important. Swanson provides us with a detailed and timely background to advance and inform discussions about what form that management should take.

Frederick H. Swanson is author and editor of five books on western U.S. history, including Dave Rust: A Life in the Canyons, which received the 2008 Utah Book Award. He is a fellow of the International League of Conservation Writers and recipient of the Wallace Stegner Prize in Environmental Humanities. Table of Contents:Preface
Acknowledgments
Introduction
1. Exploration
2. The Bridges of White Canyon
3. The Objects to Be Protected
4. Rainbow in Stone
5. The Great American Plateau
6. Desert Yosemite
7. See America—and Especially Utah—First
8. A Great and Beautiful Playground
9. New Wonderland
10. Grand Circle
11. Desert Reefs and Stone Arches
12. Scenic Drives and Rocky Trails
13. Zeke’s Bridges
14. The View from the Aquarius Plateau
15. The Monument That Almost Was
16. Negotiations
17. Wilderness
18. Inspiration at Dead Horse Point
19. New Discoveries in an Old Landscape
20. Water and Power
21. Mission
22. Hidden Canyon
23. A Park in the Canyon Lands
24. The Road to a New Park
25. Master Plan
26. Jewel of the Colorado
27. Preservation and Expansion
28. Smokestacks on the Plateau
29. That Ribbon of Dirt
30. Wasted: Canyonlands at Risk
31. Out of the Blue: A Monument for the BLM
32. Managing Parks in a Crowded World
33. Promoting Use—and Understanding
34.  Sacred Land, Divided Nations
Coda: A Land of Wonder
Notes
Bibliography
Index

“Swanson’s affection for these landscapes, captured in his narrative prose, is contagious. This book will make a splendid traveling companion for any visitor to Utah’s national parks and monuments. It supplies an accessible, well-informed, and lively account of the formation and preservation of these national treasures.”
—Brian Q. Cannon, coauthor of The Awkward State of Utah

“An engaging and finely written book that weaves together an impressive group of individuals and stories.”
—Jedediah S. Rogers, coeditor of Utah Historical Quarterly and author of Roads in the Wilderness

“Fred Swanson knows Utah and its national parks intimately and in this important book digs deeply into the fascinating history of the magnificent public lands there. A significant addition to national park history.”
—John C. Miles, author of Wilderness in National Parks: Playground or Preserve

“A masterpiece of scholarly research coupled with a skill in storytelling that is sure to engage even the casual reader who has an interest in the conservation of Utah’s wild and scenic treasures.”
—Hank Hassell, author of Rainbow Bridge: An Illustrated History