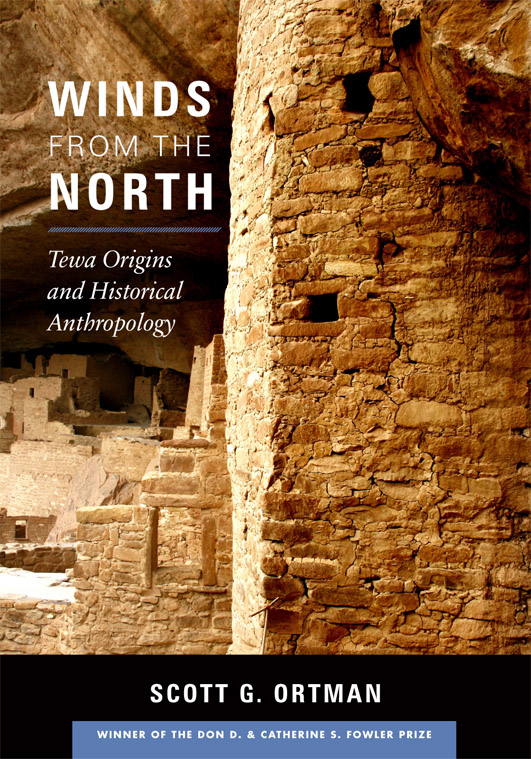 Winner of the Don D. and Catherine S. Fowler Prize

The “abandonment” of Mesa Verde and the formation of the Rio Grande Pueblos represent two classic events in North American prehistory. Yet, despite a century of research, no consensus has been reached on precisely how, or even if, these two events were related. In this landmark study, Scott Ortman proposes a novel and compelling solution to this problem through an investigation of the genetic, linguistic, and cultural heritage of the Tewa Pueblo people of New Mexico.

Integrating data and methods from human biology, linguistics, archaeology, and cultural anthropology, Ortman shows that a striking social transformation took place as Mesa Verde people moved to the Rio Grande, such that the resulting ancestral Tewa culture was a unique hybrid of ideas and practices from various sources. While addressing several long-standing questions in American archaeology, Winds from the North also serves as a methodological guidebook, including new approaches to integrating archaeology and language based on cognitive science research. As such, it will be of interest to researchers throughout the social and human sciences.

Scott G. Ortman is an Omidyar Fellow at the Santa Fe Institute and the Lightfoot Fellow at the Crow Canyon Archaeological Center.

“A very significant contribution. It will prove to be a landmark study since it shows new ways forward to the many archaeologists all over the world who are grappling with the sort of long-standing problem, concerned with questions of migration and ethnic identity, that Ortman addresses. It combines theoretical sophistication, solid methodology, and a detailed knowledge of a range of different types of evidence.”—Stephen Shennan, Director, UCL Institute of Archaeology

“The scope of Ortman’s book is immense and reifies what a modern four field approach toward anthropological inquiry looks like. … It has, without a doubt, set a precedent for future anthropological and archaeological research in the Northern Rio Grande region.”—Ethnobiology Letters
“Winds from the North is the most comprehensive and anthropological study of the origins of a single Native American ethnolinguistic group in the Southwest. … Ortman’s historical anthropological approach to the study of ethnogenesis is both novel and transformational. His integrated analysis of biological, linguistic and material culture variation serves as a model for future research on population origins and ethnogenesis by biological anthropologists.”—American Journal of Physical Anthropology
“Ortman’s book points the way for continued Kiowa-Tanoan research and is commendable for bringing up Kiowa-Tanoan as a research area that should be situated in a cultural context as much as possible. This remarkable book shows that genes, language, and material culture have independent paths, but that by considering their separate trajectories jointly, it is possible to recover many details from the past.”—International Journal of American Linguistics