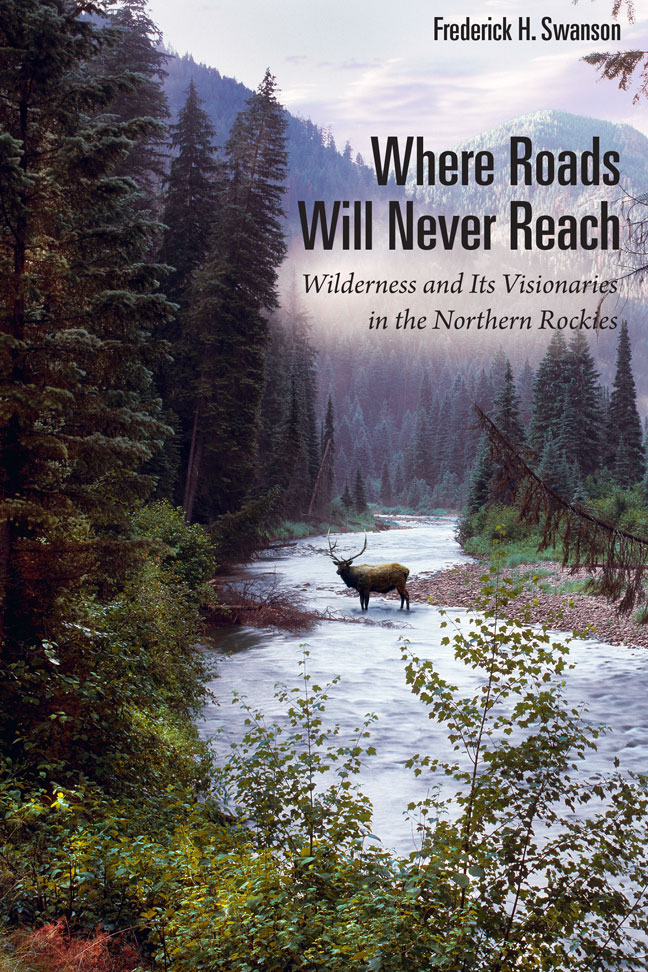 The Rocky Mountains of Idaho and Montana are home to some of the most important remaining American wilderness areas, preserved because of citizens who stood against massive development schemes that would have diminished important wildlife habitat and the abiding sense of remoteness found in such places. Where Roads Will Never Reach tells the stories of hunters, anglers, outfitters, scientists, and other concerned citizens who devoted themselves to protecting remnant wild lands and ecosystems in the Northern Rockies. Environmental historian Frederick Swanson argues that their heartfelt, dedicated work helped boost the American wilderness movement to its current prominence.

Based on newly available archival sources and interviews with many of the participants, this groundbreaking study explores for the first time the grassroots campaigns that yielded some of the largest designated wilderness areas in America.

Frederick H. Swanson writes about the wild landscapes of the West from his home in Salt Lake City. His books include The Bitterroot and Mr. Brandborg: Clearcutting and the Struggle for Sustainable Forestry in the Northern Rockies (University of Utah Press, 2011). Among his awards are the Wallace Stegner Prize in Environmental and American Western History, the Spur Award, and the Utah Book Award.

“Offers a provocative, stimulating, and engaging study of the history of wilderness and of the efforts to protect wilderness areas. The author has delved deeply into this subject and probed its major milestones, campaigns, and arenas.”
—Mark Harvey, author of Wilderness Forever: Howard Zahniser and the Path to the Wilderness Act

“Outside of Alaska, the Northern Rocky Mountains are the absolute heart and soul of what’s left of primitive America. We owe a great deal of thanks to the many ordinary citizens and small handful of legislators who saved these tracts from extensive fragmentation during the frenzy of post-war industrial overdevelopment. And we owe Swanson our gratitude for telling their story in clear, direct, and readable prose.”
—James M. Glover, author of A Wilderness Original: The Life of Bob Marshall

“Swanson has captured the importance of passion and commitment by individuals and groups to the wild lands of the Northern Rockies. The people portrayed in his book felt connected to the land and flora and fauna that make Montana the last best place.”—Joan Montagne, past president, Madison-Gallatin Alliance
“This reliable and very well written account of the forest history of the Northern Rockies, with a focus on the great Wilderness resource of this region, is based on an amazing and innovative use of primary sources, with no archival source being missed. Without doubt the definitive history of this important subject.”—Dennis Baird, The Selway-Bitterroot Wilderness History Project
“In this systematic and detailed study of establishing wilderness areas in the Northern Rockies, Swanson provides a valuable reminder that preservation advocates should remember the role of sportsmen and outfitters who understood the backcountry as a place of beauty and living space for wild creatures.”—Environmental History
"Swanson shows how grassroots efforts can alter national environmental policy."—Forest History Today