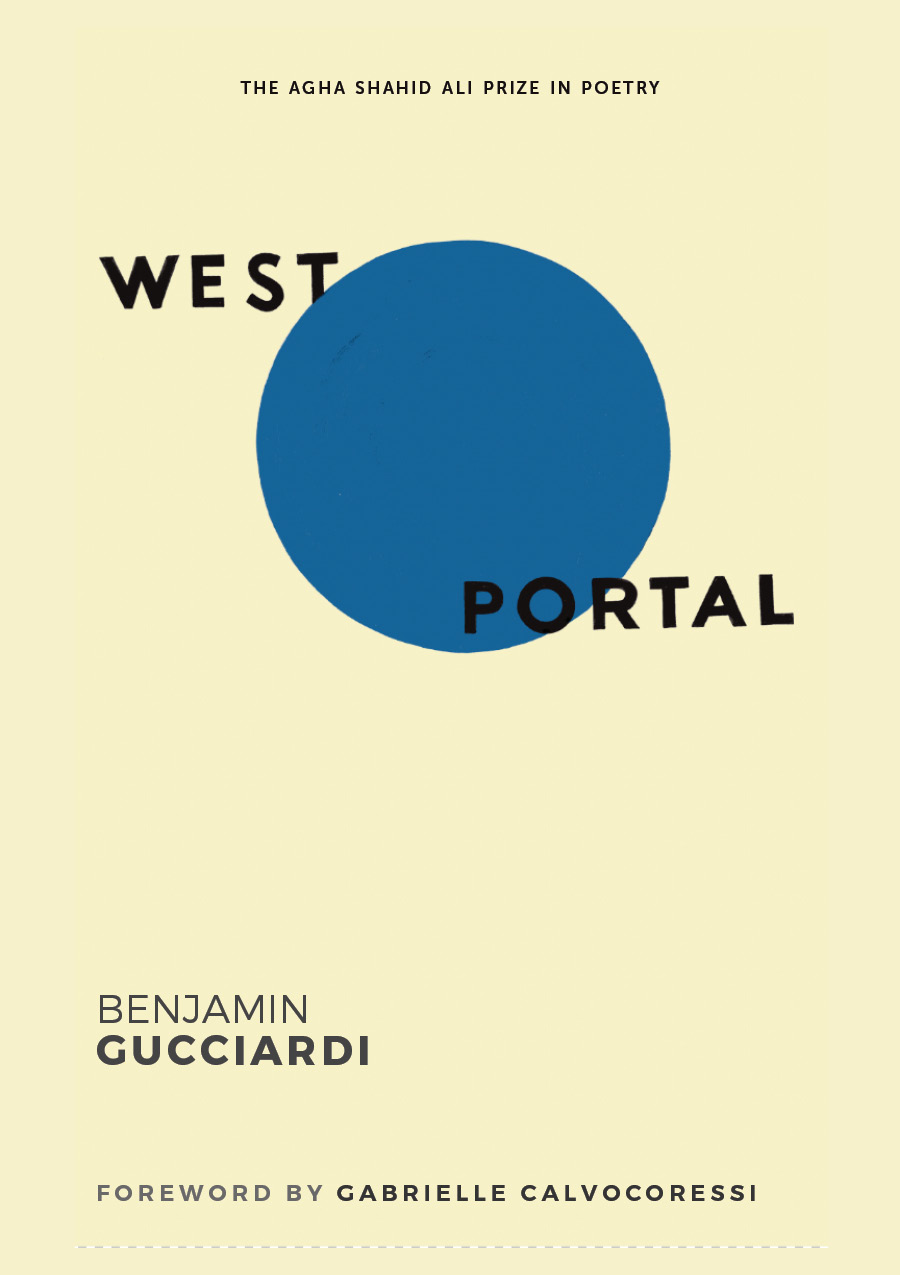 West Portal is the name of the neighborhood in San Francisco, California, where poet Benjamin Gucciardi grew up. It is also one of the names of the Pillars of Heracles—the entryway to the afterworld. Drawing on William Carlos Williams’s assertion that “the local is the only thing that is universal,” West Portal investigates the Bay Area’s urban and rural landscapes along with the memories and people that reside there. Interweaving the narrative of the death of the poet's sister with the environmental and socioeconomic realities of the current moment, the poems in West Portal illuminate the experience of loss, and the attempt to create meaning in the wake of devastation. Through poems that are prayerful, observant, elegiac, pained, dreamlike, philosophical, and compassionate, the book asks: What do we consider holy? What is virtue? What should any of us value about our relationship to place or our relationship with each other?Benjamin Gucciardi is the author of the chapbook I Ask My Sister’s Ghost (DIAGRAM/New Michigan Press). His poems have appeared in AGNI, Alaska Quarterly Review, Best New Poets, Harvard Review, New Ohio Review, Orion Magazine, Southern Indiana Review, and other journals. He has received BOOTH’s Prize for Unexpected Literature, the Milton Kessler Memorial Prize from Harpur Palate, the Trifecta Poetry Prize from Iron Horse Literary Review and a Dorothy Sargent Rosenberg prize, as well as awards and fellowships from the Sewanee Writer’s Conference, Jentel Foundation, PLAYA, and Artsmith. He also works with refugee and immigrant youth in Oakland, California, through Soccer Without Borders, an organization he founded in 2006.
Praise and Reviews:“The beautiful and the terrible live alongside each other in this work. And so often, they’re actually the same thing. Or they are happening all at once. There is such deep searching in this book and such formal precision. And the language is luminous, which makes the harrowing physical and psychic landscape even more profound. At the center of this world is the ghost of the poet’s sister who proves that ghosts are always the best teachers. They see us.”
—Gabrielle Calvocoressi, author of Rocket Fantastic

“In West Portal, ravishing beauty and ravenous grief braid into utterly lucid and breathtaking poems. The language—deftly scored on the page, rippling with tenderness—radiates with the hushed warmth of an intimate conversation. Ben Gucciardi’s first book has the lyrical depth of a second or third book. It’s an astonishing debut.”—Eduardo Corral

"Ben Gucciardi’s West Portal reverberates with compassionate intensity. Navigating the tragedy of his sister’s death, its aftermath, and what the living can learn from the dead, these poems spark with tender attention to detail: he reaches into his sister’s ashes expecting their consistency to be like masa and instead feels bone. He brings a thermos of soup to one of his students who has been kicked out of the house by his uncle, and they walk, exchanging stories, by the San Francisco Bay. West Portal asks us, in this great plastic patch of life, how does the poet 'un-drown' himself? One way is to dive right into the great scope of being in all of its dazzling, bewildering power."—Sandra Simonds

"West Portal takes place 'in the pause between death and tendril,' where the 'word for beauty sounds just like the word for camel, and the phrase I borrowed sometimes means I burned.' In this in-between world, Benjamin Gucciardi shows us a landscape stricken by loss, but also painted with hints of joy some may call reincarnation or a goldfinch’s song. It’s this attention to emotion and image that makes this debut poignant and specifically brilliant like 'the red blaze of ice-plants.'"—Javier Zamora

“I revere books of poems that accomplish three things: praying, singing, and storytelling. The poems in West Portal achieve all three. The poetic modes are mixed and at times hybridized. Deep intelligence and deep feeling seem to hold each other in a death-gripped balance. There’s something narrative at stake here, too. We’re taking an emotional journey that carries us from one place to another. Maybe that isn’t exactly narrative, but it borrows from narrative structure, and has something to do with a character evolving or changing over the course of a book. I love this about West Portal, a massively ambitious book.”
—David Roderick, author of The Americans and Blue Colonial
“West Portal is a stunning collection of death-haunted poems that not only interrogate the nature of existence but in formally various ways celebrate our brief time on earth. Ben Gucciardi shows how small details, observed or remembered and rendered in lines that sing and soar, make life worth living. Here is a primer on the movements of the soul, which will surprise, delight, and offer solace.”
—Christopher Merrill, author of Self-Portrait with Dogwood