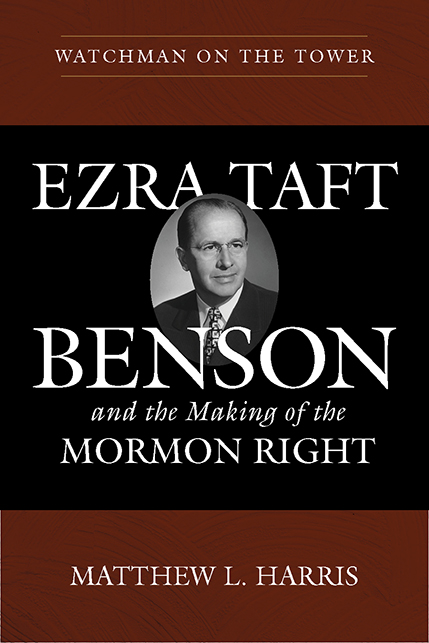 Ezra Taft Benson is perhaps the most controversial apostle-president in the history of the Church of Jesus Christ of Latter-day Saints. For nearly fifty years he delivered impassioned sermons in Utah and elsewhere, mixing religion with ultraconservative right-wing political views and conspiracy theories. His teachings inspired Mormon extremists to stockpile weapons, predict the end of the world, and commit acts of violence against their government. The First Presidency rebuked him, his fellow apostles wanted him disciplined, and grassroots Mormons called for his removal from the Quorum of the Twelve. Yet Benson was beloved by millions of Latter-day Saints, who praised him for his stances against communism, socialism, and the welfare state, and admired his service as secretary of agriculture under President Dwight D. Eisenhower. Using previously restricted documents from archives across the United States, Matthew L. Harris breaks new ground as the first to evaluate why Benson embraced a radical form of conservatism, and how under his leadership Mormons became the most reliable supporters of the Republican Party of any religious group in America.

Matthew L. Harris is professor of history at Colorado State University-Pueblo. He is the author of The Mormon Church and Blacks: A Documentary History and editor of Thunder from the Right: Ezra Taft Benson in Mormonism and Politics. Table of Contents:
Acknowledgments
Introduction
1. “Socialist New Deal”
2. “Socialized Agriculture”
3. Making a Conspiracy Culture
4. Reining in the Apostle
5. Remaking Benson
Epilogue
Notes
Bibliography
Index
Praise and Reviews:"Ezra Taft Benson was one of the most significant and controversial figures in the twentieth-century Church of Jesus Christ of Latter-day Saints.  Thanks to Matt Harris’s outstanding book, we can now make better sense of Benson’s far-right political ideology and activism, substantial influence on the church, and consequential legacy.  Deeply researched, hard-hitting but always fair, and written with a lively pace, Watchman on the Tower is essential reading for anyone interested in understanding modern Mormonism."
—Patrick Q. Mason, Leonard J. Arrington Chair of Mormon History and Culture, Utah State University

"In this well-researched and timely book, Matt Harris reveals that Ezra Taft Benson once chided professional historians for “inordinately” humanizing “the prophets of God.” Here it is Benson himself who is sensitively and carefully humanized, and thank goodness. Harris skillfully positions Benson’s firebrand politics and anti-communist rhetoric within the ethos of their time, and our understanding is the better for it."
—Jana Riess, senior columnist for Religion News Service and author of The Next Mormons: How Millennials Are Changing the LDS Church

"This is a wonderfully engaging book and the first of its kind. It is not a general biography of Benson. Instead it is a very well researched study of how his far-right political views affected relationships with his political party, with his apostolic colleagues, and with the LDS Church membership."
—Armand L. Mauss, professor emeritus of sociology and religious studies at Washington State University and author of All Abraham’s Children: Changing Mormon Conceptions of Race and Lineage

“Documenting Benson’s extended controversial foray in politics makes a major contribution to the history of the LDS Church during the 1960s, especially in view of later attempts to diminish Benson’s participation in such activities. This work is one of the best discussions of the subject now available.”
—Gary James Bergera, editor of Confessions of a Mormon Historian: The Diaries of Leonard J. Arrington, 1971 to 1997

"The significance of Ezra Taft Benson has not been fully appreciated. This book will be of interest to Latter-day Saint scholars and students of twentieth-century religious and political history.”
—Robert Alan Goldberg, author of Enemies Within: The Culture of Conspiracy in Modern America

“Harris’s book is a valuable addition to understanding Benson’s role in church history and politics in the mid-20th century. Perhaps its most important quality is portraying Benson himself as a church leader in full relief, something previous biographies have not done.”
—Association for Mormon Letters
“A fascinating and highly recommended study of a controversial figure in Mormon history who was also a seminal voice in America’s ever evolving culture of conspiracy. The book will be read with profit by scholars of American religious history and new religious movements, as well as historians and political scientists interested in the intersection of religion and conservative politics in America.”
—Nova Religio
“A must read for anyone interested in the intersection of faith and politics in the Church of Jesus Christ of Latter-day Saints.”
—Association for Mormon Letters