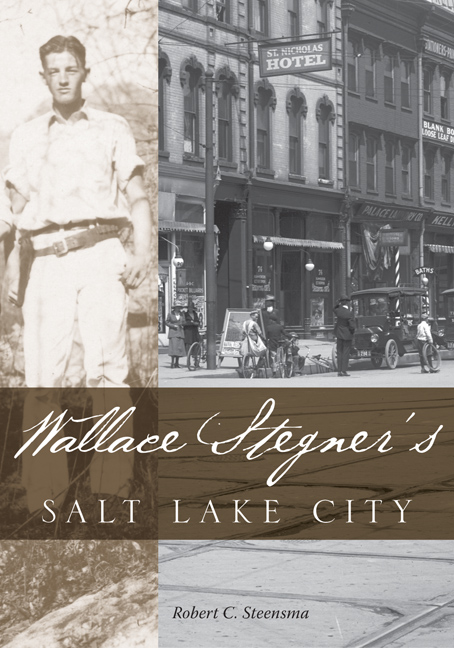 Wallace Stegner (1909–1993) was born near Lake Mills, Iowa, and grew up in Saskatchewan, Canada; Great Falls, Montana; and Salt Lake City. He spent nearly twenty years in Salt Lake, from 1921 to 1937, and attended East High School and the University of Utah. He later taught at the University of Wisconsin, Harvard, and Stanford.
As he was later to say in his essay 'At Home in the Fields of the Lord,' he eventually realized that, if he had to have a hometown, it was Salt Lake City. He came to use the 'City of the Saints' for settings in three novels: The Big Rock Candy Mountain, Recapitulation, and The Preacher and the Slave (later retitled Joe Hill). His years in Utah helped develop the environmental ethic he espoused so eloquently in his famous 'Wilderness Letter.'
Robert Steensma has meticulously searched through archival photographs, quotations from Stegner’s writings, and interpretive essays in order to recreate the Salt Lake City of the 1920s and 1930s, the city of Stegner’s youth and young adulthood. This is a book that will appeal to all who have been moved by Stegner’s novels, nonfiction, or his urgent appeals for conservation.
Robert C. Steensma is emeritus professor of English at the University of Utah.
Praise and Reviews:
"Readers nostaglic for Salt Lake City and the University of Utah of the 1920s and 1930s will find nourishment. Historians will find the book insightful and well researched, a worthy addition to collections of books on either Stegner or Salt Lake City."—Utah Historical Quarterly

"This splendid book pays fitting tribute to one of Salt Lake City's most illustrious residents, Wallace Stegner. Anyone who has the good fortune of reading Stegner's books and essays or hearing him speak or teach will love this volume—especially the photos, which comprise half of the book."—Deseret Morning News

"Steensma's book will appeal to Stegner buffs and anyone who wants to see, or remember, what Salt Lake Valley was like in the days before urban sprawl."—The Salt Lake Tribune