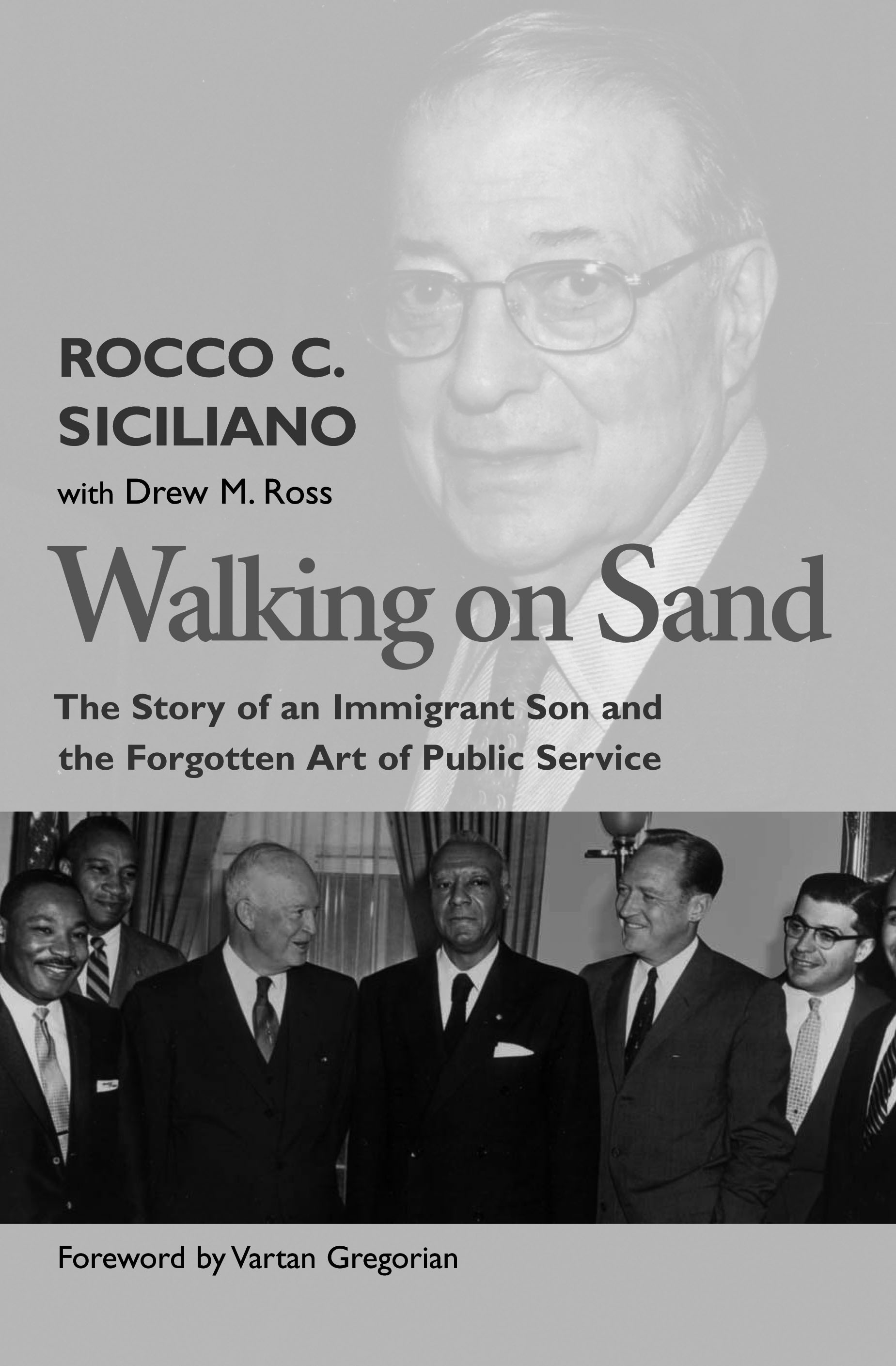 Rocco C. Siciliano broke new ground as the first Italian-American to serve in the White House as an assistant to the president, Dwight D. Eisenhower. At 31, "Ike’s Youngest" attained a prominence not suggested in his humble beginnings in Salt Lake City, Utah. But his upbringing in the Mormon-dominated community, where he balanced the heritage of his striving immigrant parents with his own aspirations for success, prepared him for a wide variety of service. This service includes leading a special weapons platoon in the 10th Mountain Division in World War II, bringing Martin Luther King Jr. to meet with President Eisenhower, and becoming a recognized business leader in California.

Siciliano used his expertise in labor, personnel management, and business to contribute substantively to the J. Paul Getty Center, the Los Angeles Philharmonic Association, the Committee for Economic Development, and the "Volcker" Commission on Public Service, among others.

The variety of Siciliano’s experiences reinvigorates our understanding of the forgotten art of public service. Walking on Sand emphasizes the role that public service can play for corporations, communities, states, and the nation. This story is a gift from the Greatest Generation to the many people who serve America today and will serve her tomorrow.

Rocco Siciliano lives with his wife in Beverly Hills, California.

Part I. Confronting Invisible Barriers, 1922–1948
1. To Be Like Them yet Not of Them
2. From Famiglia to Family
3. Fuel of My Ambition
4. Love and War at the University
5. Rest of Fire: The Italian Front Line
6. Making the Grade

Part II. For the Good of Others, 1949–1971
7. Ike's Youngest
8. The Bracero Program
9. Inside the White House with President Eisenhower
10. Walking on Sand
11. Casting About
12. Nixon's Pay Board: A Public Administration Disaster

Part III. Toward a Better America, 1971–
13. The Bottom Line at TICOR
14. The Second Bottom Line: A Corporate Executive's Community Duty
15. The J. Paul Getty Center
16. An America That Works
17. In Search of Good Government

Epilogue
Index
Praise and Reviews:
"From devoted family man to successful to dedicated public servant, this story of Rocco Siciliano is a true inspiration. He proves that the American dream is still alive and still attainable—provided you work as hard as he did."—Bill Press, political analyst MSNBC

"Rocco Siciliano's distinguished careers in both the public and the private sectors testify to the power of his intellect, his will, and his ability to creatively solve important problems."—Patricia W. Ingraham, Distinguished Professor of Public Administration, the Maxwell School, Syracuse University

"I always knew Rocco was a splendid 'government man' and a first-rate executive, but now I know that he is also an excellent writer. I enjoyed it thoroughly."—Senator Robert Bennett

"It would be hard to find a more heartening example of an ethical climb to the top."—James D. Hodgson, former US Ambassador to Japan and former Secretary of Labor

"The story of a remarkable man of extraordinary ability, uncompromising integrity, and a strong sense of public service that propelled him to the highest levels of both government and the private sector."—Harold Burson, Founder and Chairman, Burson-Marsteller