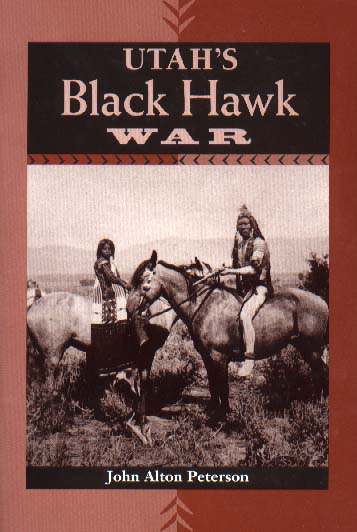 "On Sunday 9 April 1865, Ulysses S. Grant and Robert E. Lee met in the parlor of Wilmer McLean’s brick home in Appomattox Court House, Virginia, to negotiate the conclusion of the Civil War. That same day, far to the west, a handful of Mormons and northern Utes met in the central Utah town of Manti in an attempt to achieve a peace of their own. Unlike the negotiations at Appomattox, however, those in Manti failed, and the events that transpired there are viewed as the beginning of Utah’s Black Hawk War, the longest and most serious Indian-white conflict in Utah history."
—From the book

So begins the story of Black Hawk, Ute Indian warrior chief and brilliant strategist, and Brigham Young, sagacious religious and political leader of the Mormons. Two powerful and unyielding men forged by hardship and conviction, both revered and both reviled in their times. One, orchestrating a remarkable campaign to turn back the tide of white expansion and prevent the extinction of his people, the other, attempting to keep his exiled church and its thriving utopian society sovereign and intact. Two men of distinct races, beliefs, and cultures, but sharing a determination to keep U.S. soldiers out of their bloody conflict for control of land and other resources in the Utah territory.

From 1865 to 1867, the warrior Black Hawk, also known as Antonga, led a combined force of Utes, Navajos, and Paiutes in a series of intense stock raids on the Mormon settlements in Utah territory. Black Hawk astutely judged that political conflict between the federal government and Mormon Utah would keep U.S. soldiers from chastising his band. Moreover, the antagonism of Washington toward Utah’s polygamy, theocracy, and isolationism made Mormon leader Brigham Young wary of seeking federal help. In fact, to keep the government from using the war as a pretext for sending more troops to Utah, the Mormons withheld information, making the Black Hawk War an almost secret war as far as the rest of the nation was concerned. As directed by Brigham Young, Utah’s Latter-day Saint citizens mobilized a church militia, the Nauvoo Legion, to repel Indian attacks. Yet Black Hawk and others were able to carry on their activities for almost eight years without incurring the federal military reprisals that Indians on all four sides of the Mormon heartland experienced. Bloodshed on both sides plunged Mormons and Indians into a war of vengeance—years of killing and raiding that continued until federal troops stepped in 1872.

In this unprecedented volume, historian John Peterson provides the first comprehensive analysis of a unique and compelling chapter of western history and of the violent and protracted conflict it engendered. Utah’s Black Hawk War not only explores political intricacies and broader implications, scrutinizing the Mormons' Indian policies—most notably Brigham Young’s extraordinary "better to feed them than fight them" teachings—but also presents vivid narrative accounts of various raids and battles. The result is a masterfully researched and engagingly written account of Utah’s secret war, a war largely unknown among western history students, scholars, and enthusiasts—until now.

"For almost eighty years, historians and the Utah community have waited for a scholar to write the history of Utah’s Black Hawk War. We finally have the answer in this exemplary work by author John A. Peterson."—Brigham D. Madsen, University of Utah

"This important book opens up to scholars and general readers alike not only a significant and long neglected domain of Utah’s history, but also a rigidly suppressed one."—Alfred L. Bush, curator, Princeton Collections of Western Americana

“A mind-stretching book! A well-written, carefully organized text. Peterson presents a persuasive argument that to the ‘bench legs’ of spiritual, economic, and ‘political affairs’ must now be added the leg of ‘Mormon-Indian relations’ for a ‘stable’ account of Mormon Utah history in itself, and in the context of a broader American history in the second half of the 19th century.”—Journal of the West
“The first comprehensive study of this conflict in its historical context. [Peterson] not only draws on the abundant Mormon sources…but he also mines the federal territorial, military, and Indian Affairs archives to recover the views of non-Mormon federal officials.”—Utah Historical Quarterly
“Extensive and impressive research. This fine history illuminates more than just another conflict between Indians and whites in the West. It adds significantly to our understanding not only of Ute history but of subjects as wide-ranging as Mormon-federal relations, Navajo history during the Long Walk period, and the 1870s Ghost Dance.”—Western Historical Quarterly