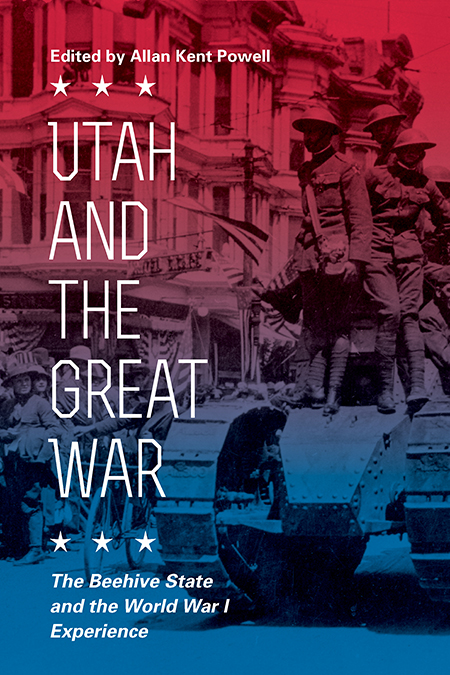 In time for the centennial of the United States’s entry into World War I, this collection of seventeen essays explores the war experience in Utah through multiple perspectives, from those of soldiers, nurses and ambulance drivers who experienced the horror of the conflict firsthand to those on the home front who were transformed by the war. Citizens supported the war financially, through service on councils of defense, with victory gardens, and by other means. Some of Utah’s Native Americans and at least one Episcopal bishop resisted the war. The terrible 1918–1919 flu pandemic impacted Utah and killed more victims around the world than those who died on the battlefields. There was a Red Scare and fight over United States participation in a League of Nations. These topics and more are explored, helping us understand the nature and complexity of the conflict and its impact on Utahns.

Allan Kent Powell retired in 2013 as managing editor of the Utah Historical Quarterly and as senior state historian at the Utah State Historical Society.

1. The National Guard on the Mexican Border in 1916  – Richard C. Roberts
2. The Utah National Guard in the Great War, 1917–18  – Richard C. Roberts
3. “A Perfect Hell”: Utah Doughboys in the Meuse-Argonne Offensive, 1918  – Brandon Johnson
4. “If Only I Shall Have the Right Stuff”: Utah Women in World War I  – Miriam B. Murphy
5. Utah’s War Machine: The Utah Council of Defense, 1917–1919  – Allan Kent Powell
6. Soldiers, Savers, Slackers, and Spies: Southeastern Utah’s Response to World War I  – Marcia Black and Robert S. McPherson
7. Kanarraville Fights World War I  – Kerry William Bate
8. Immigrants, Minorities, and the Great War – Helen Z. Papanikolas
9. Our Cradles Were in Germany: Utah’s German-American Community and World War I  – Allan Kent Powell
10. Enemy Aliens and Internment in World War I: Alvo von Alvensleben in Fort Douglas, Utah: A Case Study  – Joerg A. Nagler
11. Gosiute-Shoshone Draft Resistance, 1917–1918  – David L. Wood
12. A Question of Conscience: The Resignation of Bishop Paul Jones  – John R. Sillito and Timothy S. Hearn
13. The Influenza Epidemic of 1918–19 in Utah  – Leonard J. Arrington
14. The Influenza Epidemic of 1918: A Cultural Response  – Robert S. McPherson
15. Beyond the Spotlight: The Red Scare in Utah  – Andrew Hunt
16. Some Timely Observations on the League of Nations Controversy in Utah  – James B. Allen
17. A History of Memory Grove  – William G. Love

“It is very significant to have these articles collected into one publication now that the centennial of World War I is here. It is especially important in helping us to remember that history repeats itself and that we have been through the same emotions in the past that we are going through today.”
—Robert S. Voyles, director of the Fort Douglas Military Museum

“A well-organized collection of articles that progress from the state’s military contributions to the Great War through political, protest, and health activities to the aftermath. Relevant to both scholars and general readers, this book is multidimensional.”
—Walter Jones, author of The Sand Bar: A History of Casper, Wyoming’s Controversial Lowlands

“The essays included in this book have added significantly to our understanding of American life on the home front during the Great War. I would recommend that those who teach Utah state history at any level pick this book up.”—Association of Mormon Letters
“The short but powerful essays make the book an enjoyable and interesting read. This collection draws the reader into a mixture of the military, political, and social atmospheres of the time and offers unique insight into the lives of everyday Utahns.”—On Point
“The greatest strength of the volume is the breadth of its essays. Diverse collections can also be a double-edged sword as editors struggle to stitch together disparate essays into a cohesive theme. Powell faced all of these expected challenges but did so with the skill of a seasoned editor who knows his state’s history. The focus, while local, is not insular, and provides several small studies that add to our understanding of larger trends in the war.”—h-net.org