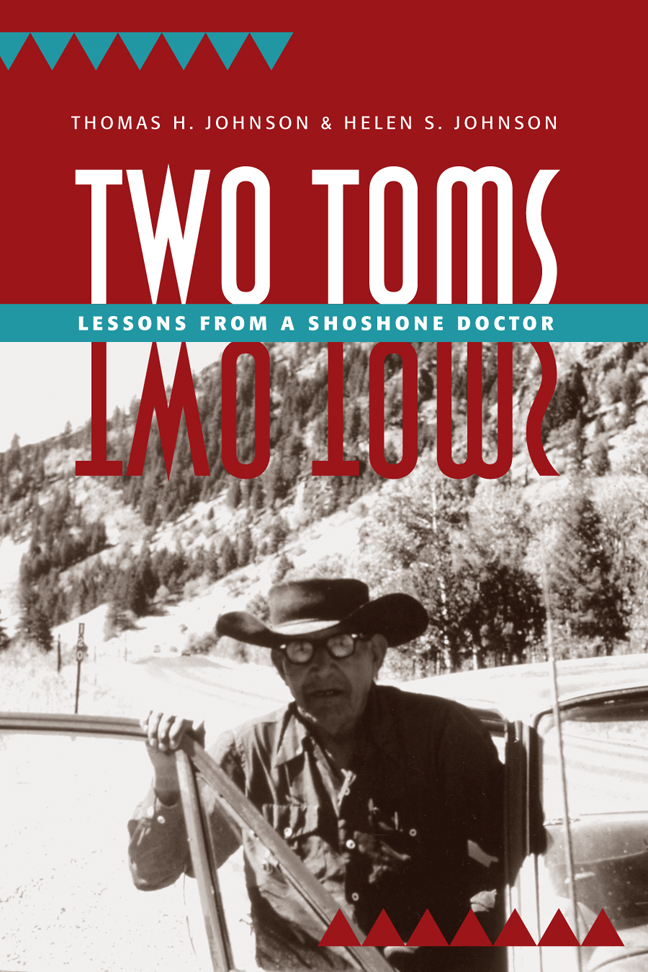 In 1969, Tom Wesaw was an 83-year-old Shoshone doctor and religious leader on the Wind River Reservation in Wyoming. He could no longer drive, which posed problems in making house calls. The arrival of young anthropologist Tom Johnson changed that. Johnson would drive Wesaw, and cook, pump water, and build fires for sweat lodges. In exchange, the elder Tom would show the younger Tom his work. The two were together so often that the people of Wind River began to refer to them affectionately by one name: Two Toms. By the light of the lamp Wesaw gave him, Johnson would write down what he learned. The Shoshone doctor wanted his student to share everything he saw and heard. Now, in Two Toms: Lessons from a Shoshone Doctor, he has.

Presented as an engaging narrative, Johnson’s book reveals details about the Shoshone culture and it chronicles the story of the friendship between these two men of different backgrounds. Filled with valuable anthropological information, this book is also highly readable and entertaining.

Thomas H. Johnson is Professor Emeritus of Anthropology at the University of Wisconsin, Steven’s Point.

Helen S. Johnson assisted Thomas with fieldwork on the Wind River Reservation and is co-author of Also Called Sacajawea: Chief Woman’s Stolen Identity.
Table of Contents:
Contents
List of Figures
Introduction
1. The Pink Phone
2. Hat and Shoes
3. Peyote
4. Another Way
5. Tom the Listener
6. A Visit with Bill Shakespeare
7. Politics
8. The Sweat Solution
9. What I Learned from Tom
Glossary
Praise and Reviews:

“This is a gentle book, yet it contains powerful descriptions of traditions and life among the Eastern Shoshone Indians. The dialogue epitomizes the Shoshone way of teaching and the authors should be justly proud of capturing the spirit of culture in this manner.”—Henry E. Stamm IV, Idaho State University

"An engaging memoir...highly readable. The authors do not hamper the reader with repeated thematic discussions. Rather their words reveal truths quietly, in small bits and pieces that add up to a tremendous amount of information.... It can be read in one sitting but is best savored slowly."—Montana, The Magazine of Western History
"Delightful book.... The most important aspect of this work is the traditional Shoshone philosophy of Wesaw, which taught tolerance and inclusiveness of all people, no matter their background or ethnicity."—Great Plains Research