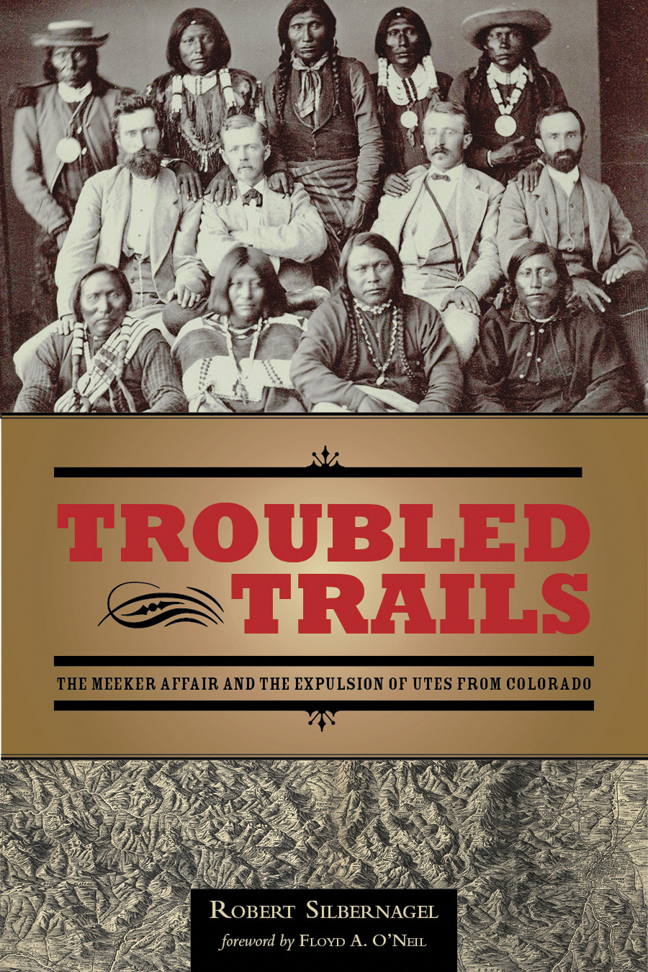 When U.S. Cavalry troops rode onto the Ute Indian Reservation in northwestern Colorado on September 29, 1879, they triggered a chain of events that cost the Utes their homeland: a deadly battle at Milk Creek, the killing of all men at the Indian agency headed by Nathan Meeker, and the taking of three women and two children who were held hostage for 23 days. The Utes didn’t seek a fight with the whites, most of whom they viewed as friends. However, powerful whites in Colorado wanted the Utes expelled. The Meeker affair was an opportunity to achieve that.

In Troubled Trails, Robert Silbernagel casts new light on the story of the Meeker Affair. Using details from historical interview transcripts and newspaper articles, he reveals the personalities of the major characters—both Indian and non-Indian. He tells the story from many perspectives, including that of Indian Agent Nathan Meeker; the U.S. military; Nicaagat, a leader of the White River Utes; and Josephine Meeker, Nathan Meeker’s daughter, who was held hostage by the Utes. Silbernagel took great pains to tell a complete story, even following on horseback the trail taken by the Utes. As a result, his book paints a multifaceted picture of what took place and, most importantly, his portrayal brings the Ute side of the story into focus.

Robert Silbernagel has been writing for Colorado news­papers since 1975. He is currently editorial page editor at The Daily Sentinel in Grand Junction and has earned several awards from the Colorado Press Association.

List of Illustrations
Foreword by Floyd A. O’Neil
Preface
Acknowledgments
List of Individuals Involved in the Meeker Affair and Its Aftermath

2. The Battle at Milk Creek and the Killings at the White River Indian Agency

3. Hostages in the Borderlands

19. The Trail to Washington

22. The Final Trail for Nicaagat and Josephine

Introduction to the Appendices

Appendix I. How Many Fought at Milk Creek?: Supplement to Chapter 2

Appendix III. Mormons on Their Minds: Supplement to Chapter 9

Appendix VIII. What Happened to the Utes’ Horses?: Supplement to Chapter 21

“Sibernagel has given life and color to the major figures. He not only provides an even-handed account, based on ‘accurate historical facts,’ but uses the oral history of the Indian people involved. He has proven that it is possible to reinterpret old and available written sources to shed new light on worn-out storylines and beliefs.”—Veronica E. Tiller, author of Culture and Customs of the Apache Indians

"Troubled Trails successfully illuminates these poorly studied events, rectifies historiographic errors, and integrates previously absent Ute perspectives into the historical record. A welcome addition to the histories of the intermountain West, Ute peoples specifically, and the histories of native dispossession more broadly."—Montana: The Magazine of Western History
"[A] thoroughly researched and fast-moving account."—Colorado Book Review
“A powerful and provocative story that draws us into the time and mind of western Colorado during the 1870s and 80s. Through Silbernagel’s meticulous research we can more fully appreciate the social, economic, and cultural differences that created the ‘perfect storm’ of distrust and misunderstanding of the two cultures. Readers will find this to be fascinating reading.”—Mike Perry, Executive Director, Museum of Western Colorado
"Troubled Trails will become a benchmark book in Colorado history....[Silbernagel is] a sensitive writer who maintains a professional journalistic balance in his assessment of court documents, newspaper accounts, Congressional testimony and valuable Indian oral histories....[This is] a fine book deserving of a wide audience."—The Daily Sentinel, Grand Junction
"Silbernagel provides believable reconstruction that ties topography to historic account.... It is not a rehash but fresh insight into certain aspects of this twice-told tale. This book makes [a valuable contribution] in further understanding a complex series of events that pushed a relatively peaceful Indian group from the beautiful, mineral-rich mountains of Colorado to the high deserts of Utah.”—Utah Historical Quarterly