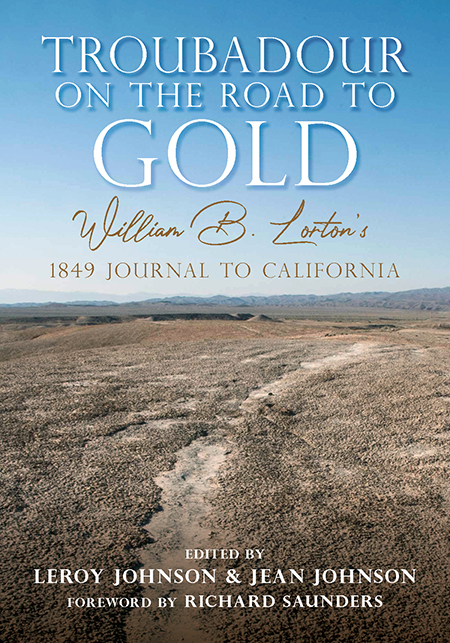 During the California Gold Rush, many of the miners and merchants who hoped to strike it rich in California left behind letters and journals that provide valuable insights into one of the great migrations in American history. Of all the journals and diaries left behind, William B. Lorton's is perhaps the most informative and complete. Although known to historians for decades, Lorton’s journal has never been published. In this volume, LeRoy and Jean Johnson bring Lorton’s writings to life with meticulous research and commentary that broadens the context of his narrative.

Lorton’s work is revealing and entertaining. It captures glimpses of a growing Salt Lake City, the hardships of Death Valley, and the extraordinary and mundane aspects of daily life on the road to gold. With resilience and a droll sense of humor, Lorton shares accounts  of life-threatening stampedes, dangerous hailstorms, mysteriously moving rocks, and slithering sidewinders. The inclusion of images, maps, and the editors’ detailed notes make this a volume that will entertain and inform.LeRoy and Jean Johnson have studied and traveled the overland trails of the American West for more than forty years. Jean is a historian of the pioneer history of Death Valley and author of Grit and Gold: The Death Valley Jayhawkers of 1849. Together they coauthored Escape from Death Valley and co-edited William Lewis Manly’s Death Valley in ’49.Table of Contents:List of Maps
List of Illustrations
Foreword by Richard Saunders
Preface
Acknowledgments
Introduction: The Siren’s Call
Part I — Gold Rush Overture
1. New York City to Monmouth, Illinois, 1848–1849
Part II — On the Trail: Western Illinois to Salt Lake City
2. Across Iowa to St. Joseph, Missouri
3. St. Joseph to Kanesville, Iowa
4. Kanesville to Fort Laramie, Wyoming
5. Fort Laramie to Independence Rock, Utah
6. Independence Rock to Salt Lake City
Part III — The Southern Route: Salt Lake City to Pueblo de Los Angeles
7. Among the Mormons at Salt Lake City
8. Salt Lake City to Beaver River, Utah
9. Beaver River to Mount Misery, Utah
10. Travails in Terra Incognita
11. Old Spanish Trail into Southern California
12. California!
13. Afterword
Appendix A: Constitution, By-Laws, and Roster: Knox County Company, Illinois
Appendix B: The San Joaquin Company’s Disastrous Detour into the Escalante Desert
References
Index
Praise and Reviews:“One of the finest, most complete, and highly detailed journals of the famous Forty-Niners ever written. Lorton is a highly intelligent, very astute observer, and at times a brilliant, sensitive, and colorful writer. The editorial comments, footnotes, bibliography, photographs, maps, and illustrations all combine to make this a remarkably thorough study. The research that went into this work is impressive.”
—Richard E. Bennett, Brigham Young University
“Troubadour on the Road to Gold will stand as one of the outstanding accounts of overland travel. All who appreciate and study the history of the American West, and specifically the experiences of those who traveled its trails, will find a wealth of information in this remarkable new publication.” —Overland Journal