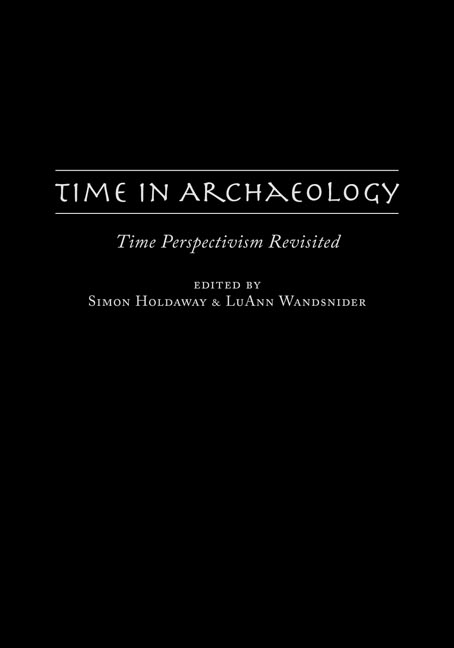 In archaeology, time is used to convey a wide range of meanings with common usage in just a couple of senses. Thus, we students of time must devote considerable time to establishing the timing of past events, the lapse of time, and learning about times past.
The point of departure for this volume lies in the post-tumultuous times of processual archaeology, in the 1970s and 1980s, when Geoff Bailey, Lewis Binford, David Clarke, Robert Dunnell, Robert Foley, and Michael Schiffer, among others, initiated a deconstruction of time as used in archaeology. Here, the authors further this deconstruction.
Time in Archaeology was originally convened as an electronic symposium held at the Society of American Archaeology meetings in 2003. The result is a tightly focused group of papers that provide both a historical background to the development of the ideas of time perspectivism as well as a range of case studies that illustrate where scholars have taken the ideas. This book demonstrates the importance of concepts of time with excellent discussions and perspectives from twelve scholars working in vastly different arenas. It is a rigorous examination of the assumptions we make and the impacts of those assumptions. After reading this you may never think about time in quite the same way.
Simon Holdaway is associate professor of archaeology at the University of Auckland, New Zealand. He also serves as co-director of the Western New South Wales Archaeological Programme. He is the author of A Record in Stone: The Study of Australia’s Flaked Stone Artifacts.
Luann Wandsnider is associate professor of anthropology at the University of Nebraska-Lincoln. She is coeditor of Space, Time, and Archaeological Landscapes.
Table of Contents:

1. Time in Archaeology: An Introduction
2. Time Perspectivism: Origins and Consequences
3. Time Perspectivism and the Interpretive Potential of Palimpsests: Theoretical and Methodological Considerations of Assemblage Formation History and Contemporaneity
4. Lower Paleolithic Industries, Time, and the Meaning of Assemblage Variation
5. Time-Averaged Deposits and Multitemporal Processes in the Wyoming Basin, Intermontane North America: A Preliminary Consideration of Land Tenure in Terms of Occupation Frequency and Integration
6. Investigating Persistent Places in the Northern Great Plains, Central North Dakota
7. Assemblage Accumulation as a Time-Dependent Process in the Arid Zone of Western New South Wales, Australia
8. Time Averaging and the Structure of Late Pleistocene Archaeological Deposits in Southwest Tasmania
9. Time Perspectivism and the Structure of Archaeological Records: A Case Study
10. No Time like the Present
11. Paradigms and Metaphysics, or "Is This the End of Archaeology as We Know It?"

"After reading this book I will never think of time in the same way....This book is really important [and] will become a classic reference."—Julie Stein, University of Washington