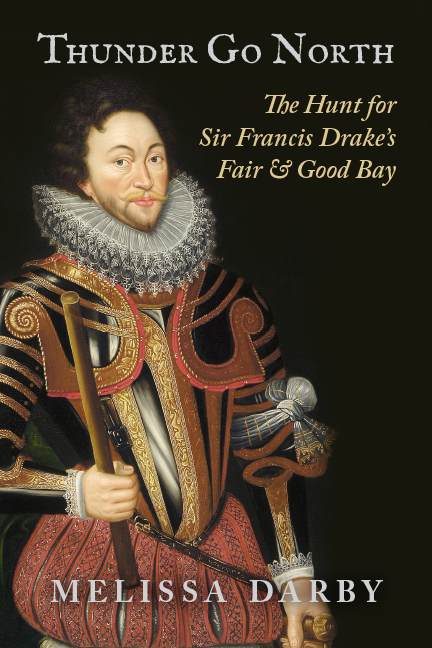 In the summer of 1579 Francis Drake and all those aboard the Golden Hind were in peril. The ship was leaking and they were in search of a protected beach to careen the ship to make repairs. They searched the coast and made landfall in what they called a ‘Fair and Good Bay’, generally thought to be in California. They stacked the treasure they had recently captured from the Spanish onto on this sandy shore, repaired the ship, explored the country, and after a number of weeks they set sail for home. When they returned to England, they became the second expedition to circumnavigate the earth, after Magellan’s voyage in 1522, and the first to return with its commander.

Thunder Go North unravels the mysteries surrounding Drake’s famous voyage and summer sojourn in this bay. Comparing Drake’s observations of the Natives’ houses, dress, foods, language, and lifeways with ethnographic material collected by early anthropologists, Melissa Darby makes a compelling case that Drake and his crew landed not in California but on the Oregon coast. She also uncovers the details of how an early twentieth-century hoax succeeded in maintaining the California landing theory and silencing contrary evidence. Presented here in an engaging narrative, Darby’s research beckons for history to be rewritten.
Errata:
It was Bob Ward who first suggested that wapato (Sagittaria latifolia) was Drake’s root petáh (personal communication with the author, 2008). In “Lost Harbour Found! Where Sir Francis Drake Really Landed on the West Coast of America, and How He Also Discovered Canada” (unpublished manuscript, July 1981), Ward also suggested that Drake’s “conie” was the muskrat (Ondatra zibethicus). The author regrets the omission of these references.
Melissa Darby is a visiting research scholar in the Department of Anthropology at Portland State University and a private consultant in cultural resource management. She has worked for over thirty years as an archaeologist and historian in the Northwest and is a noted authority on the ethnohistory of the Native people of western Oregon.
Table of Contents:
List of Figures
A Note on the Text
Acknowledgments
1.  The Problem
2.  The Historiography of the Vexed Question
3.  Mind the Gap
4.  The Beginnings
5.  Afar the Seas Were Blue and White
6.  Either Here or There
7.  The Great Discoveries
8.  The California Juggernaut
9.  Henry Wagner Huffs and Puffs and the British Blow Him Down
10. The Historian on the Hill
11. Behind the Scenes
12. The Authentication of the Plate of Brass
13. Investigations and Resolutions
14. The Commission and the Commemoration of Drake’s Voyage
15. The People at the Landing
16. An Ethnographic Assessment for an Oregon Landing
17. Linguistic Analysis
18. Thunder and Lightning: Cosmological Correspondences
Epilogue
Notes
Bibliography
Index
Praise and Reviews:
“Darby’s book is a masterpiece of detective work into the various claims for the landing location of Drake and the Golden Hind in the summer of 1579. With similarities to the Cardiff Giant and Piltdown Man hoaxes, Darby’s work uncovers a potential scientific conspiracy by one of California’s most renowned historians. She masterfully weaves a tale of political intrigue, fraud, and ego into an academic treatise that reads more like a historical mystery novel. Sometimes truth can be stranger than fiction!”
—Todd Braje, professor of anthropology, San Diego State University, and author of Shellfish for the Celestial Empire: The Rise and Fall of Commercial Abalone Fishing in California
“Meticulously researched and engagingly written, Thunder Go North embarks on a fresh investigation into a centuries-old ‘vexed question’:  Where was Francis Drake’s 1579 landing place on North America’s Pacific Coast? Using anthropological as well as historical evidence, author Melissa Darby presents a compelling case that Drake most likely came ashore on the central coast of Oregon—far to the north of Drake’s Bay, near San Francisco, the allegedly ‘long-settled’ answer to that question. She tells an exceedingly complicated but fascinating story, and tells it well. Darby’s conclusions cannot be ignored by Drake scholars or others hoping to unlock this nearly 450-years-old puzzle. In addition, Thunder Go North reveals the incredibly tangled web of intrigue, duplicity, and hoax that has bedeviled past historians' efforts to answer the ‘Where did Drake land?’ question.”
—Jeff LaLande, historian and archaeologist
“Where on the North American Pacific coast did Francis Drake land his ship the Golden Hind in 1579? The quest for an answer is full of political maneuvering and subterfuge (then and now). Melissa Darby’s detailed investigation and new conclusion as to the long controversial location of Drake’s landing should provoke much new research, both historical and archaeological.”
—R. Lee Lyman, professor and chair, Department of Anthropology, University of Missouri-Columbia
“Seldom does a published book rewrite accepted history as thoroughly and as convincingly as the Darby volume. Thunder Go North deserves wide acceptance and will always be used when studying Drake’s trip around the world.”
—Pacific Historical Review