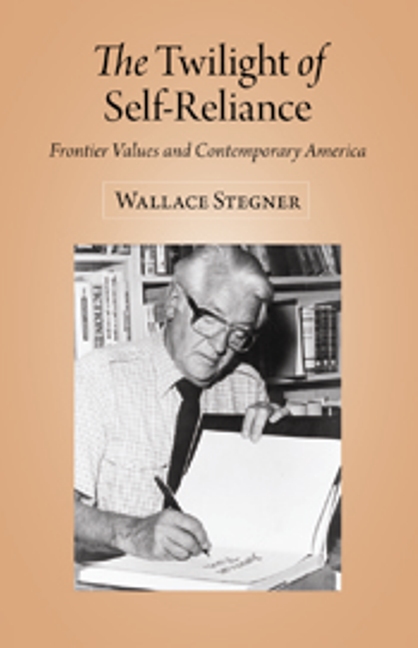 We can refresh ourselves with our own best image, and renew our image of America: not as Perfection, not as Heaven on Earth, not as New Jerusalem, but as flawed glory and exhilarating task.' –-from The Twilight of Self-Reliance: Frontier Values and Contemporary America
The occasions of the centennial of Wallace Stegner’s birth on February 18, 1909, and the University of Utah Press’s announcement of the Wallace Stegner Publication Prize in Environmental and American Western History have provided the impetus for the re-publication of 'The Twilight of Self-Reliance: Frontier Values and Contemporary America,' which was originally delivered as a Tanner Lecture at the University of Utah on February 25, 1980.
Wallace Stegner (1909-1993) was born near Lake Mills, Iowa, but eventually made his home in Salt Lake City, where he has been embraced as a native son. He is the author of more than 30 books, including Beyond the Hundredth Meridian: John Wesley Powell and the Second Opening of the West (1954), the Pulitzer Prize-winning novel Angle of Repose (1971), and Clarence Edward Dutton: An Appraisal (University of Utah Press, 2006).