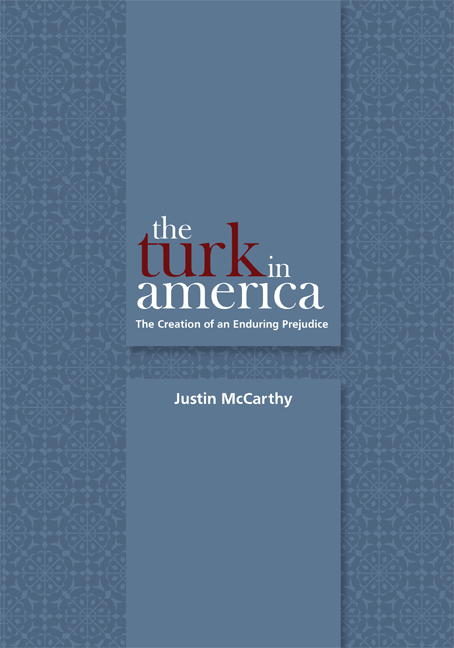 In The Turk in America, historian Justin McCarthy seeks to explain the historical basis for American prejudice towards Turks in the nineteenth and early twentieth centuries.  The volume focuses on fraudulent characterizations of Turks, mostly stemming from an antipathy in Europe and America toward non-Christians, and especially Muslims.  Spanning one hundred and fifty years, this history explores the misinformation largely responsible for the negative stereotypes of Turks during this period.

Justin A. McCarthy is professor of history at the University of Louisville, Kentucky.
Table of Contents:

List of Maps
Acknowledgments
1. The Missionaries Depart
2. Turks and Muslims in Early America
3. The Greek Rebellion
4. The Religion of the Turks
5. Education
6. The Bulgarian Horrors
7. Americans and Armenians
8. World War I: The Capstone of American Prejudice
9. The Age of Near East Relief
10. The Propaganda Bureau: The British and the Turks
11. Politics and the Missionary Establishment
12. The Last Act for the Missionary Establishment
13. Epilogue: The Myth of the Terrible Turk Lives On
Notes
Bibliography
Index

"This is a fascinating book! It is thoroughly researched and the footnotes reflect a comprehensive treatment of the subject. The Turk in America corrects a markedly one-sided historiography and breaks new ground in its exposition of how the Ottoman Turks came to be vilified in the United States in the nineteenth and twentieth centuries."—Edward J. Erickson, Command and Staff College, Marine Corps University

"The author is to be congratulated for his meticulous and detailed research. He has done a first class job of writing a history of ethno-religious propaganda as it was directed against 'the Turks' from the nineteenth century onwards, with special focus on the contribution of missionaries to anti-Ottoman propaganda in the nineteenth century, the dissemination of British propaganda in the United States during the First World War, and 'Politics and the Missionary Establishment,' as the author entitles one of his chapters. The research is comprehensive, the sources detailed, and the writing strong and direct."—Jeremy Salt, Bilket University, Ankara, Turkey