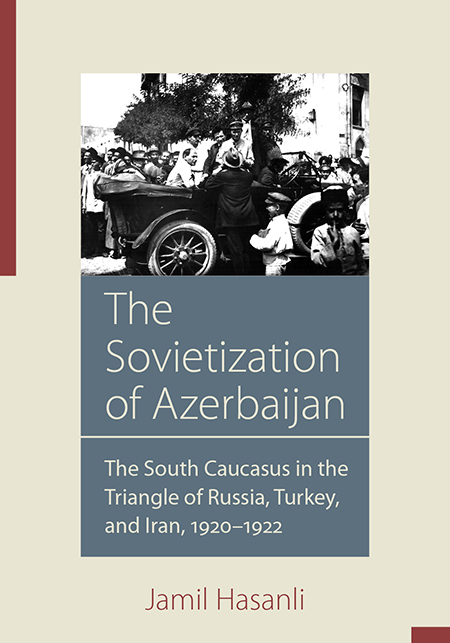 World War I and the fall of tsarist Russia brought brief independence to Azerbaijan, but by 1920 the Bolshevik revolution pushed south with the twofold purpose of accessing the oil-rich fields near Baku on the Caspian Sea and spreading communism into the Caucasus. Azerbaijan, the richest and earliest significant source of oil in the world, was the first republic in the South Caucasus occupied by the Red Army, which then advanced into neighboring Armenia and Georgia. Pulling from confidential, newly accessed archives, Hasanli describes Soviet Russia’s aggressive policy toward the three South Caucasian nations, which led to their absorption into the USSR by the end of 1922.

The book highlights the Caucasian peoples’ struggle to retain political independence against Soviet Russia and an international cast that included European powers wanting to retain petroleum concessions; Kemalist Turkey, which claimed special ties to the Turkic Azeris; and Iran, which controlled South Azerbaijan and was thus a possible route of expansion eastward for Bolshevik movement. The author also considers the impact on Azerbaijani-Armenian relations of the first two years of Sovietization and explains how Azerbaijan provided space for Bolshevik experiments. Throughout his book, Hasanli illuminates the tragedy of the complex, confused period of Sovietization of the South Caucasus.
Jamil Hasanli is a scientific analyst for the Turan News Agency in Azerbaijan and a visiting professor at East China Normal University in Shanghai, 2016–2017.
Table of Contents:
List of Maps
Preface
1. Introduction
2. The Political Situation in Azerbaijan in the Early Twentieth Century
3. The Domestic and International Position of Azerbaijan after the Bolshevik Occupation
4. The Eastern Policy of Soviet Russia and Iran
5. The Sovietization of Armenia: Moscow’s Secret Plans for Karabagh
6. Collaboration after Occupation: Drawing South Caucasus Borders after Sovietization
7. The Russian-Turkish Conference in Moscow and Azerbaijan
8. From Moscow to Kars
9. The Struggle for Baku Oil and the Formation of the Soviet Union
10. Conclusion
Notes
Abbreviations
Bibliography
Index
Praise and Reviews:
“Stunning in the depth of its archival work. The Sovietization of Azerbaijan is thoroughly documented throughout and is especially good in providing insights into the thinking of Moscow, Baku, and Ankara. It ties together in a coherent narrative the complex maneuvering and jockeying between Soviet Russia, Turkey, and Azerbaijan.”
—Michael A. Reynolds, author of Shattering Empires: The Clash and Collapse of the Ottoman and Russian Empires

“This book is a real eye-opener! The author weaves a narrative that shows a supreme mastery of its sources. It is a very detailed, focused, disciplined work, critical for understanding the background to the modern Azerbaijani-Armenian conflict since the late 1980s.”
—Uli Schamiloglu, professor of Turkic and Central Asian Studies, University of Wisconsin-Madison and visiting professor, Nazarbayev University 2016–17