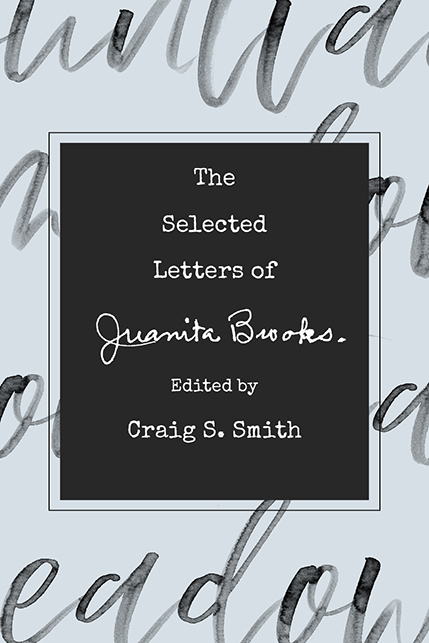 The 220 letters selected for this book offer a fresh and intimate encounter with Juanita Brooks, one of the most influential historians of Utah and the Mormons. Born and raised in the small and remote agricultural village of Bunkerville, Nevada, Brooks lived most most of her life in St. George, Utah, and rose to prominence following the 1950 publication of her landmark book, The Mountain Meadows Massacre. Her unwavering commitment to honest scholarship continues to inspire younger generations laboring to produce excellent objective history.

The letters in this volume, written from 1941 to 1978, trace Brooks’s development from fledgling historian to recognized authority. Serving almost as an autobiography of her interactions with her contemporaries, this selection provides a new perspective on Brooks’s personality and growth as a scholar. Richly detailed, chatty, and covering a wide array of subjects, the letters afford an important glimpse into Brooks’s struggles, concerns, and interests.
Craig Smith is a retired archaeologist living in the Salt Lake Valley. His interests include the archaeology and history of the West. In addition to many archaeological publications, he has contributed historical articles to the Utah Historical Quarterly, BYU Studies, Overland Journal, and Journal of Mormon History.
Table of Contents:
Editorial Procedures
Introduction
1. 1941–1943 Mentoring under Dale Morgan
2. 1944–1946 Laboring with Quicksand and Cactus
3. 1947–1950 Publishing Mountain Meadows Massacre
4. 1951–1952 Aftermath of the Mountain Meadows Massacre Book
5. 1953–1956 Editing the John D. Lee Diaries
6. 1957–1959 Writing the John D. Lee Biography
7. 1960–1961 Move to Salt Lake City and the Reinstatement of John D. Lee
8. 1962 Completing the Hosea Stout Journals
9. 1963–1964 Back in St. George and Receiving an Honorary Degree
10. 1965–1966 Looking for Her Next Major Project
11. 1967–1969 Continual Insistence on Truth in Mormon History
12. 1970–1971 Passing of Will Brooks and Back to Salt Lake City
13. 1972–1978 Her Final Letters
Notes
Bibliography
Index
Praise and Reviews:
“Smith’s book offers us a fresh and more intimate encounter with Juanita Brooks than we get even in Levi Peterson’s superb biography. He has selected about one-fourth of the extant Brooks letters, focusing tightly on her personality and development as a Utah historian, and they read almost like the diary that she never kept. Even though I was the one who processed the Brooks papers at the Utah State Historical Society, I feel like I know her better now than I ever have.”
—Gary Topping, author of Utah Historians and the Reconstruction of Western History

“This book is a portrait of a brilliant, down-to-earth woman whose accomplishments are clearly established. It can easily take its place among others that tell the story of the history of the west, the people who lived it and those who bring it to life.”
—Linda King Newell, coauthor of Conscience and Community: Sterling M. McMurrin, Obert C. Tanner, and Lowell L. Bennion

“Brooks was a fabulous letter writer, and she treated her correspondence as a journal. This new collection demonstrates her wit, humor, brilliance, and earnestness.… If you’re interested in the development of the modern Mormon historical conscious, the origins of New Mormon History, or even the intellectual dilemmas of modern Mormonism in the wake of World War II, this is a fabulous collection.”—Benjamin Park, benjaminepark.com

“The Selected Letters of Juanita Brooks is an inspirational volume for a spectrum of persons interested in Mormon and Utah history. Perhaps more than previous biographies, Craig Smith’s keen curation offers readers a chance to sit with Juanita at her workbench.”
—Association for Mormon Letters