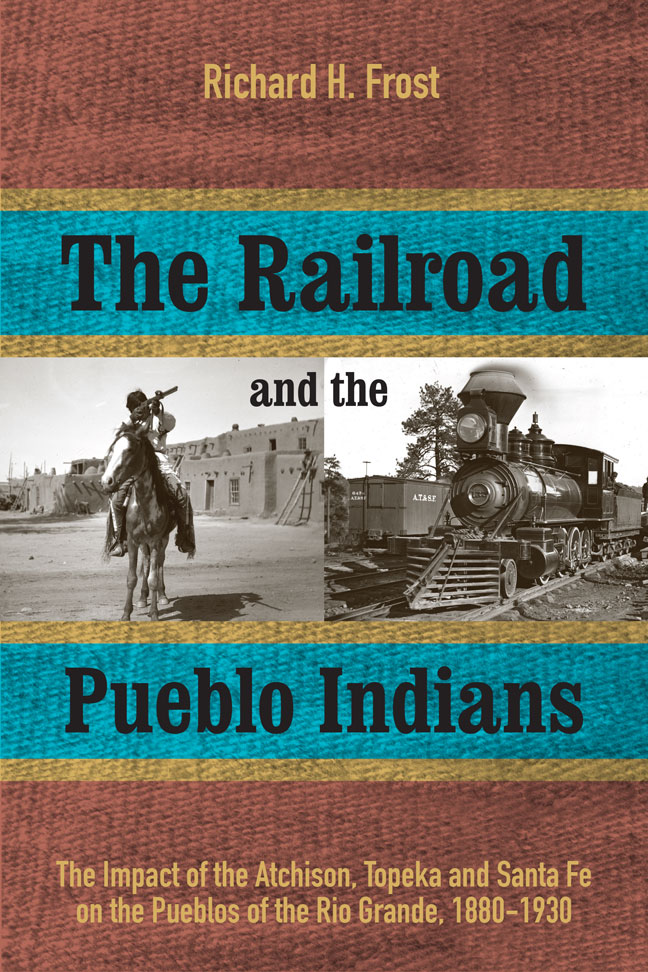 The history of the railroad conquest of the West is well known, but the impact of western railroads on Native Americans has largely been ignored. Richard Frost examines the profound effects that the coming of trains had on Pueblo Indians in New Mexico's Rio Grande Valley. The arrival of the railroad was a social and cultural tsunami. It destroyed or damaged crops, livestock, irrigation ditches, community autonomy, privacy, and well-being. The trains brought lawyers, speculators, politicians, missionaries, anthropologists, timber thieves, health seekers, and government servants. American colonialism abetted the railroads, so that the Pueblos faced land and water confiscation, court cases, compulsory American education, and other transgressions. To be sure, the trains also brought farm tools, clothing for children, and customers for Pueblo pottery; but these were comparatively marginal benefits.

The Pueblo communities responded variously, though mostly conservatively to sustain their traditional communities. This book spotlights two very different responses. Santo Domingo's reaction was hostile, but Laguna chose accommodation. These reactions reveal previously overlooked aspects of these pueblos’ histories that provide compelling reasons behind their varying responses. The book also analyzes the self-contradictory nature of Pueblo constitutional law from 1876 to 1913 and describes conflicted Bureau of Indian Affairs treatment of the Pueblos in the late nineteenth and early twentieth centuries. Each in turn had fateful consequences.
Richard Frost is Emeritus Professor of American history and Native American studies at Colgate University, and now resides in Santa Fe, New Mexico. He has served as an expert historical witness for eight of the nineteen pueblos in several natural-resource lawsuits. In 1991, Frost founded Colgate University's Native American Studies program in Santa Fe.
Praise and Reviews:
“The author’s experience with and deep understanding of Indian history and law, combined with detailed research, create a compelling picture of the impact of western railroad development on the pueblos. The paired case studies of Laguna/Acoma and Santo Domingo illuminate the range of pueblo choices and actions.”
—Laura Bayer, co-author of Santa Ana: The People, the Pueblo, and the History of Tamaya

“Frost consistently impresses the reader with his articulate prose and good choices of illustrative detail. He is a seasoned historian who knows intuitively how to engage his readership.”
—Martin Padget, author of Indian Country: Travels in the American Southwest, 1840–1935

"Richard Frost has given us a compelling case study of the powerful process of modernization—a story of corporate greed, theft, resistance struggles and cultural innovation. The book offers both a narrative of a region and an instructive account of Indian people surviving within the maelstrom of ‘progress.’ An invaluable contribution.”
—Frederick E. Hoxie, Swanlund Professor, University of Illinois, Urbana-Champaign, and author of This Indian Country: American Indian Activists and the Place They Made

“[Frost] writes lucidly and confidently. He has the welcome merit of being able to present a mass of facts without drowning the reader in them. Rather, his style buoys one up from fact to fact and point to point, so that the perusal of the book is enjoyable as well as instructive.”
—Pasatiempo

“Frost convincingly demonstrates the significant impact the AT&SF had on the northern New Mexico Pueblo communities—not only directly, but also through their influence on other actors. He also shows how valuable the new Indian history toolkit can be when examining the history of the Western railroads. Historians of both the Western railroads and of Western Indigenous communities would do well to incorporate his findings.”
—Journal of Native American and Indigenous Studies

“Relatively few historiographical texts address the effects of the railroads on Pueblo Indian history and culture, and none as admirably as Richard H. Frost in The Railroad and the Pueblo Indians. . . . Frost’s major contribution is to show that both Pueblos—Santo Domingo and Laguna—sought the same thing: their survival as distinctive Indigenous communities. Whether they did so through rejecting or incorporating the items and ideas brought by the railroad, the goal was the same.”
—New Mexico Historical Review