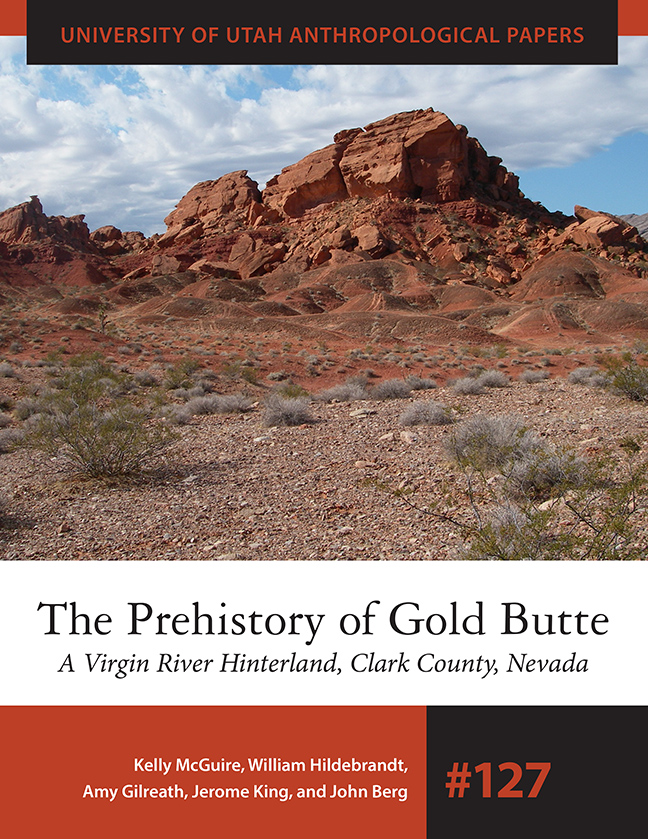 University of Utah Anthropological Paper No. 127

The Prehistory of Gold Butte uses a theoretical perspective rooted in human behavior ecology and other foraging models to present the results of one of the largest and most comprehensive archaeological investigations ever undertaken in southern Nevada, involving the systematic survey of more than 31,000 acres, the documentation of more than 377 sites, and the excavation of nine prehistoric sites. Gold Butte—at the crossroads of the Mojave Desert, the Great Basin, and the Colorado Plateau in southern Nevada—has a 12,000-year record of human occupation with archaeological elements that can be traced to all three culture zones.
Dramatic developments occurred in this area of the Desert West. Farmers suddenly appeared in the Virgin River basin about 1,600 years ago. At such iconic sites as Lost City, Main Ridge, and Mesa House, full village and agricultural life developed over the span of a few hundred years only to completely vanish by AD 1250 after a series of droughts and other cultural disruptions. The Patayan held sway for several hundred years, between AD 1100 and 1500, but didn’t advance much beyond the Colorado River corridor. Finally, the Southern Paiute arrived and occupied not only the Virgin River basin and Gold Butte but much of the northwestern quadrant of the Southwest from at least the time of historic contact (AD 1500) to the present.
This mix of cultures illustrates historical contingency, inplace development, and external relationships that should be expected along a boundary area such as Gold Butte. By looking at hinterlands adjoining the prehistoric settlements that clustered along the Virgin River corridor before, during, and after the Puebloan period, the authors suggest that changes in settlement- subsistence and lifeways at core settlements along the riverine corridor have corresponding effects on the character and intensity of hinterland occupation.
Kelly R. McGuire is one of the original founders of Far Western Anthropological Research Group and has more than 38 years of archaeological experience, primarily in California and the Great Basin. He is also a research affiliate at the Department of Anthropology, University of California, Davis.
William Hildebrandt, Amy Gilreath, Jerome King, and John Bergare all practicing archaeologists at Far Western Anthropological Research Group.
Praise and Reviews:
“Clearly significant. It’s a large, wellreported, and very well synthesized project that many people in both CRM and academic circles have heard of and now have the opportunity to learn a lot more about.”—Christopher Morgan, University of Nevada, Reno
“A published version of the Gold Butte research will represent an important contribution to the body of accessible archaeological data.”—Richard Ahlstrom, HRA, Inc., Conservation Archaeology
“Sets high analytical standards and provides a regional perspective that will be of broad archaeological interest.”—Journal of Anthropological Research
“A thorough and well-presented study.…A must read for archaeologists of this region, particularly since it represents the intersection of three geographic and cultural areas, providing fertile ground for future research.”—California Archaeology