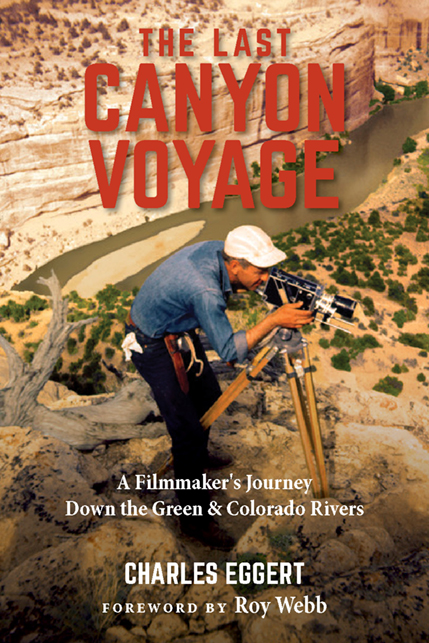 In 1955 photographer Charles Eggert and renowned river guide Don Hatch set off down the Green River with six others to duplicate the 1870s journey of John Wesley Powell. With dams soon to be built at Flaming Gorge and Glen Canyon, they planned to film the voyage and be the last to travel these waters before the landscape changed forever. Eggert’s film A Canyon Voyage debuted successfully after the trip, but his written narrative of the river, its landscape, its people, and the adventures of the crew was never published.

This book finally brings Eggert’s writings out of  the archives and into the public eye. With his keen photographer’s vision and colloquial voice, Eggert describes canyons and towns now deep under water  as he tells the story of friendships forged upon the rapids and currents of the rivers. Roy Webb’s foreword provides historical context; river historian Alfred E. Holland Jr. introduces Eggert, the man who transformed into an environmentalist after visiting the West; and Sarah Holcombe’s afterword looks at what transpired  in the lives of all eight crew members after the journey. Color and black-and-white illustrations further enliven the text. An engaging read, this is an important piece of river history that also shines light on Eggert’s tremendous influence as a conservation cinematographer.
Charles Eggert (1918–2005) was an independent filmmaker and photographer. His films were instrumental in the establishment of Canyonlands National Park and in deterring the building of Echo Park Dam, which would have flooded Dinosaur National Monument.Table of Contents:
Editor’s Note
Acknowledgments
Foreword by Roy Webb
Introduction by Alfred E. Holland, Jr.
1. The Idea
2. Don Hatch
3. Cid Sumner
4. Last Preparations in Vernal
5. Meeting in Green River
6. Getting Ready to Launch
7. On the River at Last
8. Shakedown
9. Red Canyon and the First Rapids
10. Brown’s Park and the Gates of Lodore
11. Hell’s Half Mile
12. Rippling Brook
13. Echo Park and Harper’s Corner
14. Photographing the Yampa River and Jones Hole
15. Whirlpool and Split Mountain Canyons
16. Vernal Interlude
17. Uinta Basin
18. Desolation Canyon
19. McPherson Ranch
20. Gray Canyon and Green River, Utah
21. Labyrinth and Stillwater Canyons—Cid Leaves the Expedition
22. Cataract Canyon
23. The Big Drops, Dark Canyon Rapid, and Hite
24. Hite to Ticaboo Creek
25. Glen Canyon
26. Hidden Passage
27. Rainbow Bridge to Lee’s Ferry
28. L’Envoi—Grand Canyon
Endnotes by Roy Webb
After the River by Sarah McDaniel Holcombe
Praise and Reviews:
“A significant contribution to the field of river history. Eggert has written an engaging account. He makes the various members of the party come alive as characters and he explains well the vicissitudes, problems, and joys of the journey. I found myself wanting to read on.”
—James Aton, author of The River Knows Everything: Desolation Canyon and the Green and John Wesley Powell: His Life and Legacy
“This book is a contribution to the history of exploration on the upper Colorado River, composed as it is of literature, adventure, a bit of sociology, and (harkening to the 1950s) modern history.”
—Earle Spamer, co-editor of Bibliography of the Grand Canyon and Lower Colorado River from 1540
“The Last Canyon Voyage is more than a river book. It’s a book that reminds us of what rivers do for us emotionally and spiritually. It’s their beauty, solitude, wildness, and shared fun and hardships that bond us together.”
—Boatman’s Quarterly Review