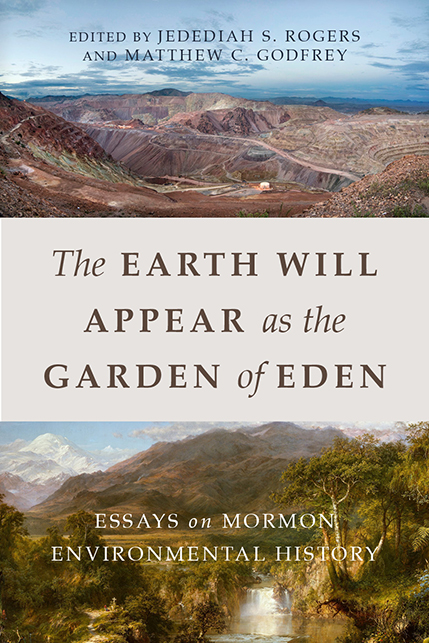 Although scholars have increasingly investigated the impact of religion and religious movements on nature, studies of the interactions between Mormons and the natural environment are few. This volume applies the perspectives of environmental history to Mormonism, providing both a scholarly introduction to Mormon environmental history and a spur for historians to consider the role of nature in the Mormon past.
Since Joseph Smith’s revelations, Mormons have interacted with nature in significant ways—whether perceiving it as a place to find God, uncorrupted spaces in which to build communities to usher in the Second Coming, wildness needing domestication and control, or a world brimming with natural resources to ensure economic well-being. The essays in this volume—written by leading scholars in both environmental history and Mormon history—explore how nature has influenced Mormon beliefs and how these beliefs inform Mormons’ encounters with nature. Introducing overarching environmental ideas, contributors examine specific aspects of nature and Mormon theology to glean new insights into the Mormon experience.
Jedediah S. Rogers is co-managing editor of the Utah Historical Quarterly. He is the author of Roads in the Wilderness: Conflict in Canyon Country and editor of two documentary accounts of Mormon history.

Matthew C. Godfrey is the managing historian of the Joseph Smith Papers and previously worked as a historical consultant on environmental issues. He is the author of Religion, Politics, and Sugar: The Mormon Church, the Federal Government, and the Utah-Idaho Sugar Company, 1907–1921.
Table of Contents:
Introduction: The Promise and Challenge of Mormon Environmental History, by Jedediah S. Rogers and Matthew C. Godfrey

Part I: Theology and Ideology
The “Lion of the Lord” and the Land: Brigham Young’s Environmental Ethic, by Sara Dant

Lost Memory and Environmentalism: Mormons on the Wasatch
Front, 1847–1930, by Thomas G. Alexander

Part II: Perception and Place
The Natural World and the Establishment of Zion, 1831–1833, by Matthew C. Godfrey

“We Seldom Find Either Garden, Cow, or Pig”: Encountering Environments in Urban England and the American West, by Brett D. Dowdle

American Zion: Mormon Culture and the Creation of a National Park, by Betsy Gaines Quammen

Before the Boom: Mormons, Livestock, and Stewardship, 1847–1870, by Jeff Nichols

“The People Cannot Conquer the River”: Mormons and Water in the Arid Southwest, 1865–1938, by Brian Frehner

“There Are Millions of Acres in Our State”: Mormon Agrarianism and the Environmental Limits of Expansion, by Brian Q. Cannon

“The Prophet Said to Plant a Garden”: Spencer W. Kimball and the Transformation of the Mormon Agrarian Tradition, by Nathan N. Waite

“For the Strength of the Hills”: Casting a Concrete Zion, by Rebecca K. Andersen

Epilogue: On the Moral Lessons of Mormon Environmental History, by George B. Handley

Appendix: Righteous Dominion and Compassion for the Earth, by Marcus B. Nash
Acknowledgments
Notes
Bibliography
Contributors
Index
Praise and Reviews:
"This felicitous collection deepens our understanding of the changing relationship between Latter-day Saints and the environmental world that here encompasses land, water, habitat, place, and home. A milestone in Mormon studies and a benchmark for future scholarship."
—Jared Farmer, author of On Zion’s Mount: Mormons, Indians, and the American Landscape

“A significant contribution. These essays provide a synthesis of the growing literature in the field as well as a springboard and road map for future studies.”
—Andrew H. Hedges, professor, Church History and Doctrine, Brigham Young University

“This collection makes a major contribution to Mormon studies by incorporating sophisticated methodologies and perspectives from the field of environmental history. The editors succeed in raising the bar on Mormon historiography with this anthology. The writing is clear and accessible and doesn’t shy away from significant and nuanced interpretations.”
—Kevin Marsh, professor, Department of History, Idaho State University
“While essays in edited volumes such as this are often uneven in terms of the quality and the contribution they offer, each piece in this work is remark­ably well written and significant. As the book’s introduction explains, Latter-day Saint environmental history is a rela­tively new discipline, ripe with opportu­nities and avenues for engagement. The introduction and Jedediah S. Rogers’s opening essay constitute a wonder­ful primer for anyone embarking on Latter-day Saint environmental history research—I found myself wishing I had had these articles when I first began to dabble in the discipline.”
—BYU Studies Quarterly
“A seminal contribution to the nascent field of Latter-day Saint environmental studies, The Earth Will Appear as the Garden of Eden lays out the field’s historical foundations… With Jedidiah Rogers’ historiographical summary and the wide range of topics and authors, the book provides a solid introduction to the state of the field. Its examination of environmental thinking in the LDS church will benefit students and scholars alike.”
—Nova Religio
“The Earth Will Appear as the Garden of Eden makes a compelling argument for expanding Mormon studies and environmental history. It calls for scholars and even Latter-day Saints themselves to reevaluate the critical historical environmental ethic of Latter-day Saints and how it had a profound effect on the settlement of the American West. The benefit to those who find themselves squarely situated in Mormon studies is to provide a fresh new lens through which to examine traditional topics anew. For environmental scholars, Mormon studies affords fertile ground for further intellectual cultivation.”
—Journal of Mormon History