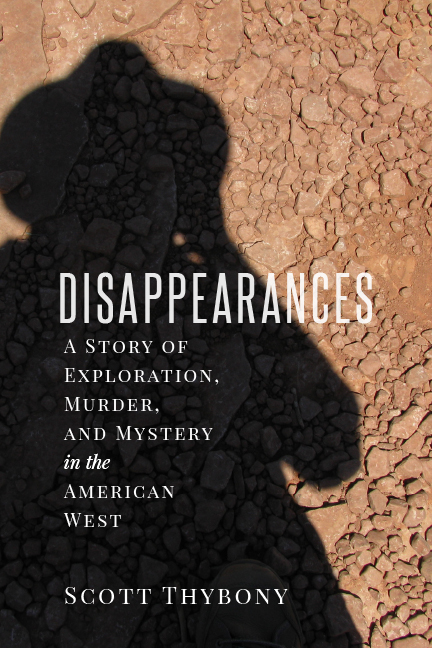 In 1935, during the wind-swept years of the Dust Bowl, three people went missing on separate occasions in the rugged canyon country of southeastern Utah, a place “wild, desolate, mysterious.” A thirteen-year old girl, Lucy Garrett, was tricked into heading west with the man who had murdered her father under the pretense of reuniting with him. At the same time, a search was underway for Dan Thrapp, a young scientist on leave from the American Museum of Natural History. Others were scouring the same region for an artist, Everett Ruess, who had disappeared into “the perfect labyrinth.”

Intrigued by this unusual string of coincidental disappearances, Scott Thybony set out to learn what happened. His investigations took him from Island in the Sky to Skeleton Mesa, from Texas to Tucson, and from the Green River to the Red. He traced the journey of Lucy Garrett from the murder of her father to her dramatic courtroom testimony. Using the pages of an old journal he followed the route of Dan Thrapp as he crossed an expanse of wildly rugged country with a pair of outlaws. Thrapp’s story of survival in an unforgiving land is a poignant counterpoint to the fate of the artist Everett Ruess, which the New York Times has called “one of the most enduring mysteries of the modern West.” Thybony draws on extensive research and a lifetime of exploration to create a riveting story of these three lives.
Scott Thybony’s explorations of the American West have resulted in award-winning articles in magazines such as National Geographic, Smithsonian, and Outside. His books include Burntwater, chosen as a PEN Center West finalist for creative nonfiction, and the bestseller Canyon Country, from the National Geographic Society.

Part 1. The Bone Hunter: Dan Thrapp
The Expedition
Below the Bighorns
West of Solitude
Horsethief Ranch: Fieldnotes
Labyrinth, a Way In
Desolation Camp
Waiting for Daylight
Winter Crossing
The Needles: Fieldnotes
Circling the Blues
Far Reaches
The Backbone: Fieldnotes
Back Trail
Below the Comb
Trackings

Part 2. The Woodcutter’s Daughter: Lucy Garrett
The Roadside
Across the Red River
On the Run
A Gun within Reach: Fieldnotes
Empty Quarter
Skeleton Murder Case
The Shoot-Out
Haunted Canyon: Fieldnotes
The Manhunt
To the Sulphur River

Part 3. The Solitary Artist: Everett Ruess
Tracks Blown Over
Into the Dream
Skeleton Mesa
The Cave: Fieldnotes
Lost Mesas, Blue Mountains
Unknown. Return to Sender
The Gulch
The Search
Forbidding Canyon: Fieldnotes
Among the Ghosts
The Inscription: Fieldnotes
A Crack in the Rim: Fieldnotes

Praise and Reviews:
“Scott Thybony once again provides a wonderful mix of natural history, history, and mystery in this story of the disappearances of three young people and the efforts to find them. It is set in Utah’s canyon country, a place where people still get lost and die, and that even 75 years later can still legitimately be called the boonies.”
—Richard Quartaroli, special collections librarian, Northern Arizona University
"For a long time, many of us have known a simple truth: No one writes better about the American West than Scott Thybony. He proves that fact again with The Disappearances. It is a compelling book from the first sentence to the last has he interweaves startling stories with poetic descriptions of time and place. With The Disappearances, Thybony shows why he has to be ranked alongside Ed Abbey and Chuck Bowden as a brilliant interpreter of the West."
—W.K. Stratton, author of Chasing the Rodeo and Ranchero Ford/Dying in Red Dirt Country
“End to end, it’s a captivating book sure to be one of the best titles coming out of the Southwest this year.”—Arizona Daily Sun
“The book reeks of mystery and solitude. . . . Anyone interested in a good old, true-life Western mystery will happily be lost in the pages of the The Disappearances.”—Journal of the West