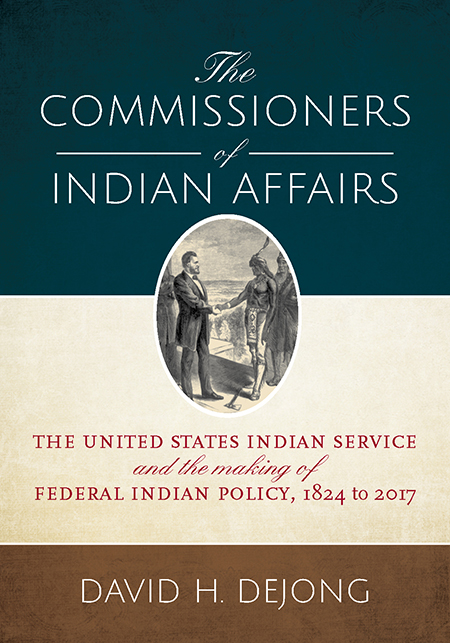 Although federal Indian policies are largely determined by Congress and the executive branch, it is the commissioner and assistant secretary of Indian Affairs who must implement them. Over the past two centuries, the overarching goals of federal Indian policy have been the social and political integration and assimilation of Native Americans and the extinguishment of aboriginal title to Indian lands. These goals have been woven into policies of emigration, assimilation, acculturation, termination, reservations, and consumerism, shifting under the influence of a changing national moral compass. Indian Affairs commissioners have and continue to hold an enormous power to dictate how these policies affect the fate of Indians and their lands, a power that David H. DeJong shows has been used and misused in different ways through the years.

By examining the work of the Indian affairs commissioners and the assistant secretaries, DeJong gives new insight into how federal Indian policy has evolved and been shaped by the social, political, and cultural winds of the day.David H. DeJong is director of the Pima-Maricopa Irrigation Project. His books include Forced to Abandon Our Fields: The 1914 Clay Southworth Gila River Pima Interviews and American Indian Treaties: A Guide to American Indian Treaties and Treaty-Making, 1607–1911.Table of Contents:List of Tables
Preface: The Commissioners of Indian Affairs
1. Aboriginal Indian Title: The Meaning of Indian Country
2. “Civilize or Exterminate?”: Formative Indian Policy, 1775–1849
3. “Halfway across the Continent”: Beginnings of a Reservation Policy, 1849–1861
4. “To Conquer by Kindness”: Civil War and Peace Policy, 1861–1881
5. “Part of the Great Family”: Allotment and Citizenship, 1881–1904
6. “The New Magna Charta”: Carrying Civilization to the Indians, 1905–1928
7. “Last Chance for the Indians?”: Reorganization and New Deal, 1928–1948
8. “Men, Money, and Management”: Termination and Relocation, 1948–1961
9. “Awakening the National Conscience”: The Call for Self- Determination, 1961–1980
10. “A Federalist Partnership”: Indian Self- Determination, 1981–2017
11. “A Most Anonymous Position”: Federal Indian Policy and the Bureau of Indian Affairs, 1824–2017
Notes
Bibliography
Index
Praise and Reviews:“This study will occupy a unique niche because there is no other work that covers the individuals who served in this critical position in Indian affairs. It is a worthy and necessary work.”
—David E. Wilkins, E. Claiborne Robins Distinguished Professor in Leadership Studies, University of Richmond