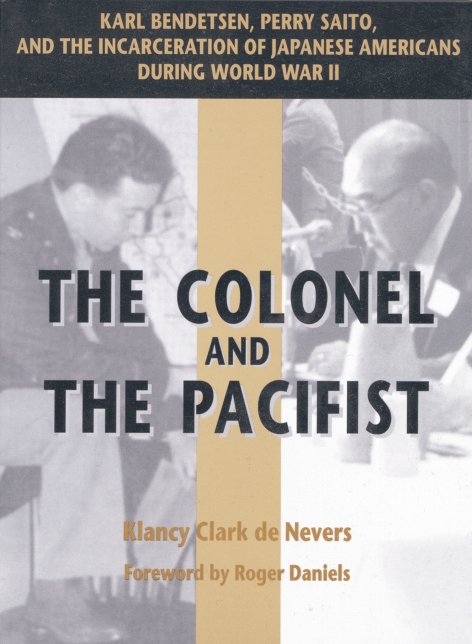 Executive Order 9066. In February 1942, ten weeks after the Japanese attack on Pearl Harbor, President Franklin D. Roosevelt put his signature to a piece of paper that allowed the forced removal of Americans of Japanese ancestry from their West Coast homes, and their incarceration in makeshift camps. Those are the facts. But two faces emerge from behind these facts: Karl R. Bendetsen, the Army major who was promoted to full colonel and placed in charge of the evacuation after formulating the concept of 'military necessity,' and who penned the order Roosevelt signed, and Perry H. Saito, a young college student, future Methodist minister, and former neighbor from Bendetsen’s hometown of Aberdeen, Washington who was incarcerated in Tule Lake Relocation Camp.
The Colonel and the Pacifist tells the story of two men caught up in one of the most infamous episodes in American history. While they never met, Bendetsen and Saito’s lives touched tangentially—from their common hometown to their eventual testimony during the 1981 hearings of the Commission on the Wartime Relocation and Internment of Civilians. In weaving together these contrasting stories, Klancy Clark de Nevers not only exposes unknown or little known aspects of World War II history, she also explores larger issues of racism and war that resonate through the years and ring eerily familiar to our post-9/11 ears.
Klancy Clark de Nevers is a retired software engineer and now a full-time writer.
Table of Contents:

INTRODUCTION One Man Makes a Difference

"Imaginative and lively, with sound scholarship, The Colonel and the Pacifist is a significant contribution not only to American history generally, but to Japanese American studies and the period of the second World War. And it does so in a lively and provocative fashion."—Sandra Taylor, author of Jewel of the Desert: Japanese American Internment at Topaz

"The Colonel and the Pacifist is a fascinating and engaging account of divergent lives marked by a singular event—World War II—and their choices exercised in shaping the course and writing of history. Highly recommended."—Gary Y. Okihiro author of The Columbia Guide to Asian American History

"Paralleling the lives of two men on opposing sides of one of the most perplexing and complicated episodes in American history is an effective means of reopening the debate over causes and casualties of Japanese internment. De Never's provocative and insightful book will aid in that process."—Pacific Northwest Quarterly