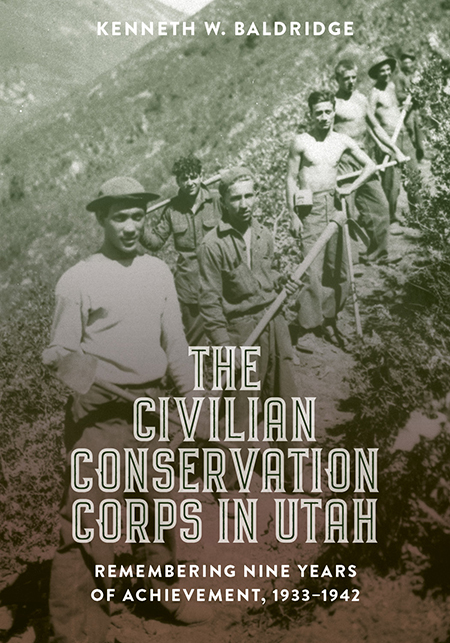 “There was a certain magic about sending young men into the woods. It was not so much man against nature as it was man in league with nature against the economic troubles that were then stalking the land.”—from the book

In 1932, unemployment in Utah was about 34 percent. Nearly every state west of the Mississippi River was struggling not only with unemployment but also with drought, erosion, and overgrazing. To solve these serious difficulties, President Franklin D. Roosevelt launched what would become arguably the most popular of his New Deal programs—the Civilian Conservation Corps (CCC). From 1933 to 1942, the CCC employed three million young men on land-improvement projects that are still used today.
In this book, Kenneth Baldridge chronicles the work of the 10,000 men who served at Utah’s 116 CCC camps. With facts and anecdotes drawn from camp newspapers, government files, interviews, letters written by enrollees, and other sources, he situates the CCC within the political climate and details not only the projects but also the day-to-day aspects of camp life. For thirty dollars a month—of which twenty-five was sent home to their folks—these young recruits planted trees; built roads, bridges, dams, and trails; fought fires; battled pests and noxious weeds; and erected cabins, campgrounds, amphitheaters, and reservoirs, and more.
Today the CCC is credited with creating greater public awareness and appreciation of the outdoors. It has also served as a model for the Student Conservation Corps and other youth programs. This volume documents the public good created by the CCC, provides an extensive bibliography, and is illustrated with numerous historic and modern photos.
Kenneth W. Baldridge, PhD, retired in 1993 after a career teaching history at California public schools, Church College of New Zealand, and BYU-Hawaii. He now enjoys spending time with his children and grandchildren as well as traveling, giving lectures, and, with his wife, Delma, delivering Meals on Wheels.
Table of Contents:
List of Figures
List of Tables
Acknowledgments
Preface

1. The Beginning
2. The Civilian Conservation Corps Comes to Utah
3. Administration of the Program
4. Those Who Did the Work: The Technical Agencies
5. The Work They Did
6. Two Major Concerns: Erosion and Flood Control
7. Dams, Canals, and Irrigation: The Bureau of Reclamation
8. Some Camps Were One or Two or Three of a Kind
9. Emergencies: Fires, Blizzards, Search and Rescue
10. Accidents, Health, and Safety
11. Life in the Camps—and Out
12. Camp and Community Relations
13. Wrapping Up and Winding Down
Epilogue: The Beat Goes On

Appendix A: Army Corp Areas
Appendix B: Utah Civilian Conservation Corps Camp Information
Appendix C: Civilian Conservation Corps Camps in Utah
Notes
Bibliography
Index
Praise and Reviews:
“This is THE book in its field. The statistics alone make it an outstanding source book. Baldridge has an incredibly extensive knowledge of work details on jobs the CCC completed in Utah. This includes the community relations problems/progress and a myriad of other pertinent areas.”
—Michael Shultz is the creator of the video documentary The CCC: A Peaceful Revolution and author of The CCC in the Allegheny National Forest, From the Forest to the Battlefield: Forty Civilian Conservation Corps Members Awarded the Medal of Honor During World War II.

“Richly detailed and carefully researched. The book helps illuminate the role played by the New Deal and specifically the CCC in breaching state and regional boundaries and promoting broader national identity and culture.”
—Brian Cannon, coauthor of The Awkward State of Utah: Coming of Age in the Nation, 1896–1945
“Nine Years of Achievement adds a dimension to the study of the CCC that one doesn't normally have the opportunity to tap. The author's research and explanation of the interface with the Department of Labor, the quota system, and the rapid movement of military companies and camps, lifts the veil of confusion that one is presented with when trying to trace CCC history. This book is a valuable educational tool and an asset to all who are interested in learning more about the CCC program and the CCC in Utah.”
—Joan Sharpe, president, CCC Legacy
“Baldridge has created a fine book on the efforts of the Civilian Conservation Corps (CCC) in Utah.… This book is a welcome addition to the growing list of fine state-level histories of the CCC and of New Deal agencies in general.”
—CHOICE
“A welcome addition to the several state case studies of the activities of the Civilian Conservation Corps (CCC)… Baldridge places the Utah [CCC] experience into national context through broad research into the national program as well as the administration of the program at the state level.”
—Journal of Arizona History

“An invaluable reference for anyone interested in the history of the CCC or interested in the creation of a new, twenty-first-century CCC. Baldridge’s detailed account allows readers to move beyond the national pictures of the CCC and consider CCC life and work on the ground.”
—H-Net Reviews