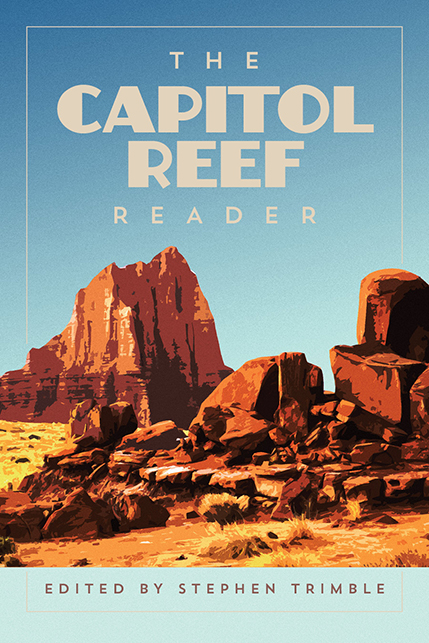 For 12,000 years, people have left a rich record of their experiences in Utah’s Capitol Reef National Park. In The Capitol Reef Reader, award-winning author and photographer Stephen Trimble collects the best of this writing—160 years worth of words that capture the spirit of the park and its surrounding landscape in personal narratives, philosophical riffs, and historic and scientific records.

The volume features nearly fifty writers who have anchored their attention and imagination in Utah’s least-known national park. The bedrock elders of Colorado Plateau literature are here (Clarence Dutton, Wallace Stegner, Edward Abbey), as are generations of writers who love this land (including Ellen Meloy, Craig Childs, Charles Bowden, Renny Russell, Ann Zwinger, Gary Ferguson, and Rose Houk). Their pieces are a pleasure to read and each reveals a facet of Capitol Reef’s story, creating a gem of a volume. Editor Stephen Trimble guides and orients with commentary and context.

A visual survey of the park in almost 100 photographs adds another layer to our understanding of this place. Historic photos, pictures from Trimble’s forty-five years of hiking the park, as well as images from master visual artists who have worked in Capitol Reef are included. No other book captures the essence of Capitol Reef like this one.

Part of the National Park Reader series, edited by Lance Newman and David Stanley
Stephen Trimble began his writing and photography career as a park ranger, including a season at Capitol Reef National Park. His books include Bargaining for Eden, Lasting Light, and The Sagebrush Ocean.
Table of Contents:
Introduction: Paradise & Slickrock by Stephen Trimble
Part I: The View from Boulder Mountain: The Geography of Hope
1. Geology of the High Plateaus - Clarence Dutton
2. Wilderness Letter - Wallace Stegner
3. Into the Escalante - Linda Elizabeth Peterson

Part III: Exploration: Walking on the Flinty Mountains
8. Incidents of Travel and Adventures in the Far West - Solomon Nunes Carvalho
9. Sights Once Seen: Daguerreotyping Fremont’s Last Expedition through the Rockies - Robert Shlaer
10. Photographed All the Best Scenery - Jack Hillers
11. Gilbert’s Notebooks - Charles B. Hunt
12.  In Cathedral Valley - George C. Fraser
13. One of the Great Trips of the World - John A. Widtsoe

Capitol Reef Timeline
Suggested Reading
Acknowledgments
Sources and Chapter Notes
Index
Praise and Reviews:
“When it comes to Capitol Reef, Trimble’s breadth of knowledge is surpassed only by his passion for the place, its people, and its grandeur. I can’t imagine a better guide through the geological beauty of the Waterpocket Fold nor through the stories of those who have known—and have sometimes been defeated by—the power of the place.”
—Jana Richman, author of Finding Stillness in a Noisy World

"Consider a subject in the hands of a gemcutter: any way you turn it, it will reflect light, depth, and a mysterious variegated understanding more comprehensive and more lasting than a single view can expect to illuminate. Stephen Trimble has assembled a marvelously faceted survey, as essential as boots on the trail, to exploring Capitol Reef National Park. Equal parts science, cultural anthropology (with its lessons in hope and hubris), history, eco-theology, and, if one counts the number of times the word “love” surfaces in these pages, part love letter, this volume leaves no stone unturned or topic in the card catalog unpopulated. But even while it is manifoldly knowledgeable, it also rather delightedly admits that much of the map is still blank, with unnamed windings and washes, chasms and canyons, and the multitude of shapes that stone can assume under the “creative impulse” of erosion—a reminder that this is not only a wilderness, but a changing one as well. From the sedimentary record of human occupation over time to the literal landscape with its “audacious geology,” and finally, to the omnipresent and disconcerting beauty of Capitol Reef, this collection will stir the mind and excite the heart. You’ll be grabbing your pack and boots before the last page settles and, like me, heading back to see all that I missed."
—Lynn Stegner, author of For All the Obvious Reasons
“The richness and variety of literature on the greater Capitol Reef region is astonishing, brought together here for the first time. Reading this collection animates the natural and cultural history of greater Capitol Reef. The writings left by the people who have lived in and passed through offer a window into the soul of a place.”
—Jedediah Rogers, author of Roads in the Wilderness: Conflict in Canyon Country
“The Capitol Reef Reader, Steve Trimble’s latest tour de force, is a red rock anthology that I couldn’t put down. Steve has woven a body of work as fascinating and gripping as Capitol Reef itself. And after immersing myself in the Reader I can’t help but believe all of us can embrace Steve’s optimistic call to preserve the authenticity of our West.”
—Mark Udall, US Senator, Colorado, 2009–2015
“Stephen Trimble has put together the guide you need to more fully appreciate Capitol Reef National Park in Utah…. Though the anthology is not a collection of where-to-go and what-to-see essays, it offers the grit from which Capitol Reef rose up. Not just the geology—though there's plenty there to ponder in awe—but also the human connections to this red-rock wonder.”
—National Parks Traveler