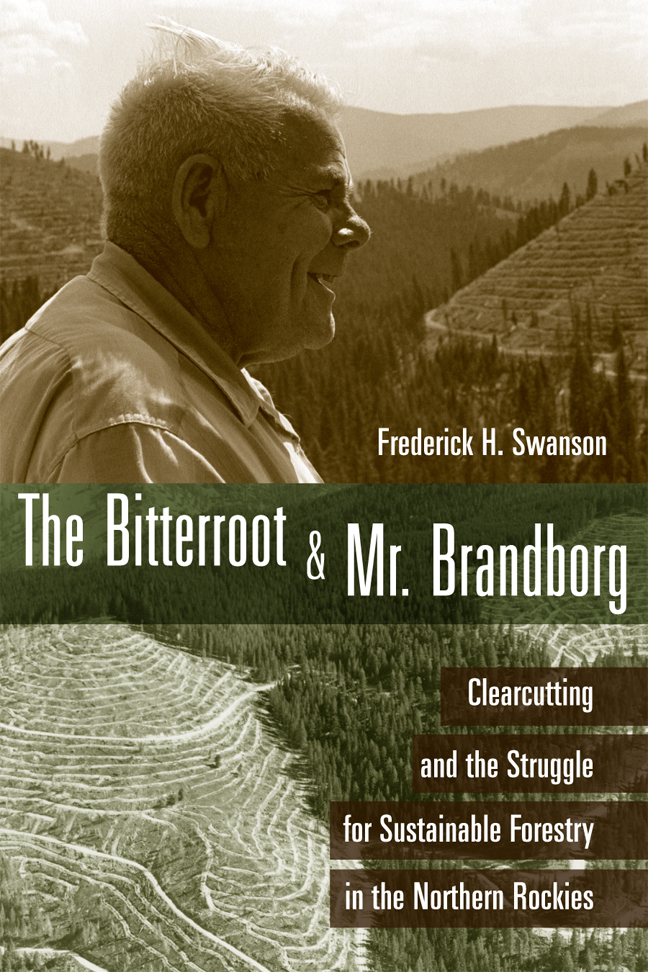 Fredrick Swanson tells the story of Guy M. Brandborg and his impact on the practices of the U.S. Forest Service. As supervisor of Montana’s Bitterroot National Forest from 1935 to 1955, Brandborg engaged in a management style that promoted not only the well-being of the forest community but also the social and economic welfare of the local people. By relying on selective cutting, his goal was to protect the watersheds and wildlife habitats that are devastated by clear-cutting, and to prevent the job losses that follow such practices. Following his retirement, he became concerned that his agency was deviating from the practice of sustained-yield management of the forest’s timber lands, and led a highly visible public outcry that became known as the Bitterroot controversy. Brandborg’s behind-the-scenes lobbying contributed materially to the passage of the National Forest Management Act of 1976, the single most important law affecting public forestry since the creation of the Forest Service.

Meticulously written, The Bitterroot and Mr. Brandborg articulates Brandborg’s Progressive-era idealism and is based on extensive archival research in collections throughout the Rockies and the Northwest, including the Brandborg family papers. Swanson’s crisp narration of how one national forest supervisor understood the intricate connection between the grasslands and forests under his care and the communities that were so dependent on these invaluable resources, opens a much larger story about the meaning of public lands in a democratic society.

Winner of the Western Writers of America Spur Award for Best Western Nonfiction-Contemporary.

Frederick Swanson writes about the West from his home in Salt Lake City. His book Dave Rust: A Life in the Canyons (University of Utah Press, 2007) won the David W. and Beatrice C. Evans Biography Award of the Mountain West Center for Regional Studies.

"The Bitterroot and Mr. Brandborg is a tour de force. Swanson opens a much larger story about the meaning of public lands in a democratic society. This book will have a profound impact on our understanding of the environmental dilemmas and political controversies that have rocked the northern Rockies since the mid-twentieth century.”—Char Miller, Director of Environmental Analysis and W. M. Keck Professor of Environmental Analysis, Pomona College, and author of Gifford Pinchot and the Making of Modern Environmentalism

"'I was so impressed by the time and research that Fred put in for the research of this book," Stewart Brandborg [son of Guy Brandborg] said. "He traveled pretty much all over the West. He was tireless in his efforts to get the story on what my dad had done.'"—Ravalli Republic

"The Bitterroot and Mr. Brandborg provides an apt illustration of how local citizens can affect meaningful and lasting changes on a national level. ...An important contribution to the history of national forest policy."—Western Historical Quarterly

"Fred Swanson's elegant prose and insightful analysis tackles a controversial subject—public lands and the bureaucracies that manage them—to tell an engaging and significant story about a man who devoted his life to building sustainable lives for the ordinary folks who love, work, and protect the West."—Roundup Magazine