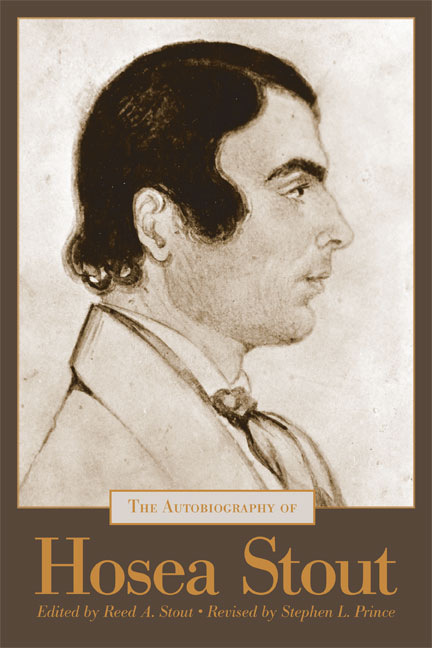 Born in Kentucky in 1810 and raised for a time in both Quaker and Shaker communities, Hosea Stout converted to Mormonism in his late twenties. He eventually rose to great rank within the religion, serving in Nauvoo as clerk of the High Council, officer in the militia and in the Nauvoo Legion, and chief of police. After the murder of Joseph Smith he was made acting brigadier general of the Nauvoo Legion and later directed the exodus from Nauvoo. In Utah, Stout served as captain of the guard in the Brigham Young Company of 1848 and, in 1849, became the first attorney general of the Territory of Utah. Two years later he became a representative to the Utah Legislature, filling for a time the role of Speaker of the House.
Stout’s two autobiographies provide a glimpse into his early life and conversion to Mormonism. Though Stout received only a frontier education, he nonetheless became literate and his writings are filled with wonderful prose. He was a complex man who held a tender and genuine love for his family and an enduring commitment to his religion, but who was at the same time an imposing figure with a sharp temper, ready at all times to rebuke through force.
Originally published in the Utah Historical Quarterly in 1962, Stout’s two autobiographies have never been reprinted. The shorter autobiography, written in 1845 for his Seventies Quorum in Nauvoo, covers a later time period than does the first and is written in almost abridged form. Stout commenced his second, more engaging autobiography while at Winter Quarters in 1847. Though incomplete (the final entry is for the year 1835), the work gives great insight into the complexities of Stout and the early life experiences that helped to shape an important and controversial man, a figure who deserves to be much better known in the annals of Mormon history.
Reed A. Stout, a great-grandson of Hosea Stout, was an attorney in Los Angeles.
Stephen L. Prince is the author of Gathering in Harmony, winner of the Evans Handcart Award and the Thomas Rice King Award.
Praise and Reviews:
"The republication of Hosea Stout’s autobiography is long overdue and makes an essential companion volume to his diary. The autobiography fills in what the diary misses, the events from his birth in 1810 to the start of the diary in 1844. It chronicles his early life in Kentucky, his participation in the Black Hawk War, his conversion to Mormonism, and his subsequent rise in the ranks of the new religious movement to positions of influence. Stout served as a Danite in Missouri and later as a body guard to Joseph Smith, Jr. He was chief of police at Nauvoo, Illinois, a member of the Nauvoo Legion, and of the LDS hierarchy’s quorum of Seventy and Council of Fifty. These pre-diary aspects of Stout’s life are available for the first time in over forty years. Combined with the diary, the autobiography is an indispensable resource in Mormon history.”—W. Paul Reeve, University of Utah