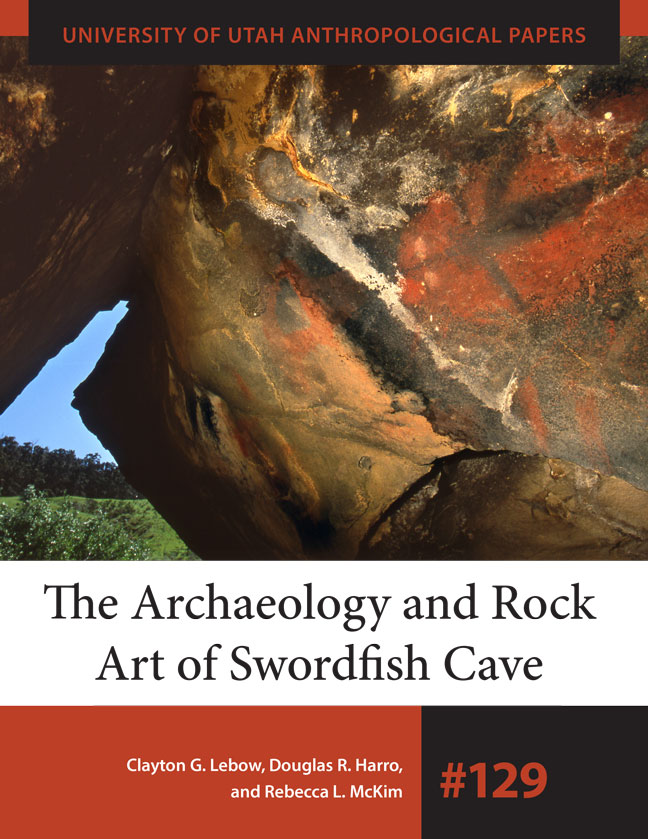 University of Utah Anthropological Paper No. 129

Swordfish Cave is a well-known rock art site located on Vandenberg Air Force Base in south central California. Named for the swordfish painted on its wall, the cave is a sacred Chumash site. It was under threat from various processes and required measures to conserve it. Nearly all of the cave’s interior was excavated to create a rock art viewing area. That effort revealed previously unknown rock art and made it possible to closely examine how early occupants used the space inside the cave. They identified three periods of human use, including an initial occupation around 3,550 years ago, an occupation about 660 years later, and a final Native American occupation that occurred much later, between A.D. 1787 and 1804. The discovery of tools used to make the pictographs linked the art to the two early occupations, pushing back the generally understood antiquity of rock art on California’s Central Coast by more than 2,000 years.
Two aspects make this study unusual: datable materials associated with rock art and complete removal of cave deposits. Well illustrated with photographs, maps, and drawings of both the art itself and the excavations and materials revealed therein, the book presents a rare opportunity to directly link archaeology and rock art and to examine the spatial organization of prehistoric human habitation.
Clay Lebow, Rebecca McKim, and Doug Harro are all registered professional archaeologists and employee-owners of Applied EarthWorks, Inc. They spent eighteen years working on numerous studies for Vandenberg Air Force Base, with Lebow serving as principal investigator, McKim as faunal analyst, and Harro as lithic analyst.
Praise and Reviews:
“The various analyses of the findings are state-of-the-art. The authors did an impressive job of gleaning information about the occupants’ use of the cave. Their study goes well beyond what is typical for a cultural resources management report or an academic study.”
—Michael Glassow, Professor Emeritus in Anthropology, University of California, Santa Barbara
“Well written and meticulous, the book will be of interest to broad audiences for its unusual combination of protection, conservation, and mitigation efforts focused simultaneously on both cave art and cave deposits. A tremendously important contribution.”
—Terry L. Jones, Professor of Anthropology, California Polytechnic State University, San Luis Obispo
“Written for a general audience based on the team’s technical findings. Well illustrated with photographs, maps, and drawings, it is an outstanding case study of rock art conservation and archaeology.”
—American Archaeology
“A remarkable collaborative effort....This study is an exemplary model of fulfilling and informative scientific investigation conducted within the cultural resources management industry, in a manner respectfully engaged with descendant indigenous peoples. The Archaeology and Rock Art of Swordfish Cave is a compelling intellectual inquiry, as in the process of answering old questions, it invites new ones. For this volume’s thorough and engaging discussion, the authors should be commended.”—California Archaeology
“The volume is beautifully presented with clear tables and figures, and wonderful color photographs of the site stabilization methods and rock art panels. The data presented in the volume are excellent, and there are several tidbits of interest to scholars of rock art, California archaeology, and hunter-gatherer archaeology more generally.”—La Pintura
“This volume is impressive in its thorough analysis of cultural materials and archaeological data. However, what I appreciated most was the synthesis of the data and broad interpretations for human use of the cave. . . . This volume is a strong contribution to the archaeology of California and the University of Utah Anthropological Papers.”—Journal of Anthropological Research