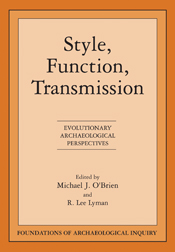 Darwin's theory of evolutionary descent with modification rests in part on the notion that there is heritable continuity affected by transmission between ancestor and descendant. It is precisely this continuity that allows one to trace hylogenetic histories between fossil taxa of various ages and recent taxa. Darwin was clear that were an analyst to attempt such tracings, then the anatomical characters of choice are those least influenced by natural selection, or what are today referred to as adaptively neutral traits. The transmission of these traits is influenced solely by such mechanisms as drift and not by natural selection.

The application of Darwin's theory to archaeological phenomena requires that the theory be retooled to accommodate artifacts. One aspect that has undergone this retooling concerns cultural transmission, the mechanism that affects heritable continuity between cultural phenomena. Archaeologists have long traced what is readily interpreted as heritable continuity between artifacts, but the theory underpinning their tracings is seldom explicit. Thus what have been referred to as artifacts styles underpin such tracings because styles are adaptively neutral. Other traits are referred to as functional.

In their introduction to Style, Function, Transmission, Michael O’Brien and R. Lee Lyman outline in detail the interrelations of a theory of cultural descent with modification and the concepts of drift, style, and function. The chapters in the volume specifically address the issues of selection and drift and their relation to style and function. In non-polemic presentations, contributors specify empirical implications of aspects of cultural transmission for evolutionary lineages of artifacts and then present archaeological data for those implications.

Michael J. O’Brien is associate dean and professor of anthropology at the University of Missouri, Columbia.

R. Lee Lyman is professor of anthropology at the University of Missouri, Columbia.