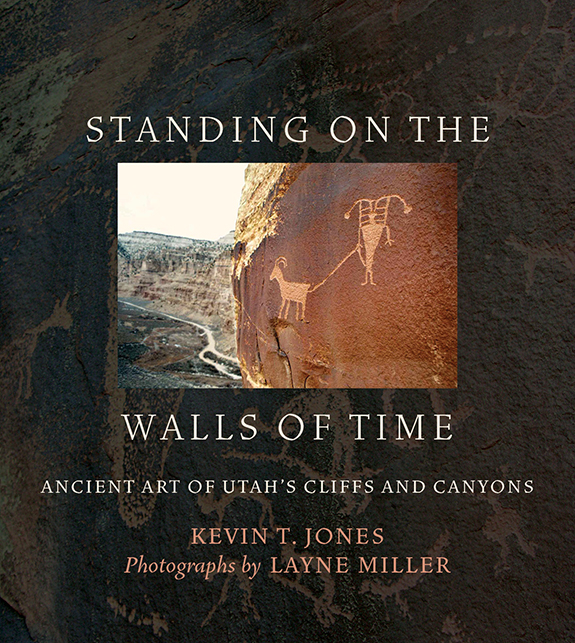 In western culture, rock art has traditionally been viewed as “primitive” and properly belonging in the purview of anthropologists rather than art scholars and critics. This volume, featuring previously unpublished photographs of Utah’s magnificent rock art by long-time rock art researcher Layne Miller and essays by former Utah state archaeologist Kevin Jones, views rock art through a different lens.

Miller’s photographs include many rare and relatively unknown panels and represent a lifetime of work by someone intimately familiar with the Colorado Plateau. The photos highlight the astonishing variety of rock art as well as the variability within traditions and time periods. Jones’s essays furnish general information about previous Colorado Plateau cultures and shine a light on rock art as art. The book emphasizes the exqui­site artistry of these ancient works and their capacity to reach through the ages to envelop and inspire viewers.
Kevin T. Jones is the former state archaeologist of Utah. He is the author of The Shrinking Jungle, an anthropological novel set among the Aché hunter-gatherers of Paraguay, among whom Jones lived and studied in the early 1980s.

Layne Miller is a retired journalist, a lifelong resident of eastern Utah, and a long-time aficionado of the rock art of the region.
Table of Contents:
Acknowledgments
1. About This Book
2. When and Where (and Why)
3. Ancient Art
4. Time, Space, Culture, and Symbolism on the Walls of Time
5. Utah: The Rock Art State
6. Rock Art Culture History
7. Images on Stone Mark the Passage of Time
8. Ghost Figures
9. The Fremont Tradition
10. Bighorn Sheep
11. The Man with a Heart of Stone
12. Hunter-Gatherer Art
13. Art and the Mind of the Creator
14. A Hundred Years from Now
Glossary
References and Further Reading
About the Author and Photographer

Praise and Reviews:
“Kevin Jones is a first-rate scientist with impeccable credentials. He’s also a fine and creative writer.”
—Stephen Trimble, author of Bargaining for Eden and editor of Red Rock Stories
“In our divisive age the phrase ‘cultural appropriation’ has been used as a wedge to separate people. What Kevin Jones and Layne Miller offer is the opposite: a reaching out across time with empathy, intelligence, and something like love. Follow them as they wedge down through cultural sediment, and the centuries, to make contact with the humans who once walked the land they walk now. It is a hopeful and joyful thing to think that we can talk to ghosts, that we can reach through time and join hands with those long gone.”
—David Gessner, author of All the Wild That Remains: Edward Abbey, Wallace Stegner and the American West
“We found ourselves enchanted by Standing on the Walls of Time. After a lifetime of study Kevin Jones' insightful prose will open doorways that provide insight and meaning to Utah's exceptional rock art. Layne Miller's evocative photography is more than a mere picture, it is a communication of meaning, mysticism and emotion. Together, Miller's photography and Jones' analytic and penetrating essays make Standing on the Walls of Time a book you will return to, ever to discover new meaning.”
—W. Michael Gear and Kathleen O'Neal Gear, New York Times bestselling authors of Star Path
“By suggesting that we abandon our search for meaning in rock art in favor of letting the 'artist speak directly to you' Kevin Jones senses that because these ancient ones thrived in this harsh landscape for thousands of years, they may have insights that could save us.”
—Brooke Williams, author of Open Midnight: Where Wilderness and Ancestors Meet
“In this remarkable book, Jones eloquently explains his attitude toward the rock art of (mostly) Utah native peoples. The volume is beautifully illustrated by Layne Miller’s photographs of rock art, predominantly from within Utah. This is not a textbook; it contains very little factual or scientific information about the prehistoric peoples who lived in Utah and created the rock art. It is an art appreciation book, a paean to the creative imagination and sophisticated cultures of some of these peoples, and the expressive originality of all of them.”
—Southwestern Lore

“The volume is beautifully illustrated by Layne Miller's high-quality photographs, which showcase the rock art in full colour, and, despite the brevity of the text, the author's passion for the images and their conservation is writ large on every page.”
—Antiquity