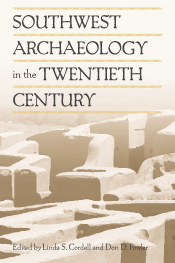 Mesa Verde, Chaco Canyon, Canyon de Chelly, and Paquimé are as well known to tourists as they are to scholars as emblems of the American Southwest. This region has been the scene of intense archaeological investigation for more than a hundred years, with more research done here than in any other part of the United States. The arid and sparsely populated landscape provides excellent site preservation, while the living native peoples give cultural continuity with the past. In the first decades of the twentieth century Americans saw the Southwest as exotic—as opposed to the Mexican perspective, which viewed the region, sometimes called the Northwest, as more of a backwater. Both views continue to shape and color the study of the area today.
With contributions from well-known archaeologists, Southwest Archaeology in the Twentieth Century reviews the histories of major archaeological topics of the region during the twentieth century, with particular attention to the vast changes in southwestern archaeology during the later decades of the century. Included are the huge influence of field schools, the rise of cultural resource management (CRM), the uses and abuses of ethnographic analogy, the intellectual contexts of archaeology in Mexico, and current debates on agriculture, sedentism, and political complexity.

"A tribute to the work that has been undertaken by generations of American and Mexican archaeologists to make the culture area truly one of the most studied in the world."—Nancy Parezo, University of Arizona

"This book will be useful to many archaeologists specializing in the American Southwest. Some essays will serve as nice reviews of half-forgotten information and others, as resources of ideas with which to agree or disagree. Graduate students will find many of the essays useful for basic information. The list of references is quite good. Additionally, since so many archaeological methods and themes originated in the Southwest, this book will be of interest to archaeologists of other regions. Overall, it provides a timely and thoughtful look behinds us as we move ahead into the challenges of the twenty-first century."—Journal of Anthropological Research