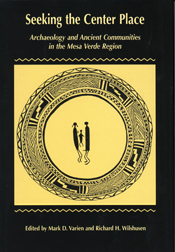 The continuing work of the Crow Canyon Archaeological Center has focused on community life in the northern Southwest during the Great Pueblo period (AD 1150– 1300). Researchers have been able to demonstrate that during the last Puebloan occupation of the area the majority of the population lived in dispersed communities and large villages of the Great Sage Plain, rather than at nearby Mesa Verde. The work at Sand Canyon Pueblo and more than sixty other large contemporary pueblos has examined reasons for population aggregation and why this strategy was ultimately forsaken in favor of a migration south of the San Juan River, leaving the area depopulated by 1290.

Contributors to this volume, many of whom are distinguished southwestern researchers, draw from a common database derived from extensive investigations at the 530-room Sand Canyon Pueblo, intensive test excavations at thirteen small sites and four large villages, a twenty-five square kilometer full-coverage survey, and an inventory of all known villages in the region. Topics include the context within which people moved into villages, how they dealt with climatic changes and increasing social conflict, and how they became increasingly isolated from the rest of the Southwest.

Seeking the Center Place is the most detailed view we have ever had of the last Pueblo communities in the Mesa Verde region and will provide a better understanding of the factors that precipitated the migration of thousands of people.

1. A Partnership for Understanding the Past: Crow Canyon Research in the Central Mesa Verde Region ~ Mark D. Varien and Richard H. Wilshusen
2. The Ancestral Pueblo Community as Structure and Strategy ~ Michael A. Adler
3. Sand Canyon Pueblo: The Container in the Center ~ Scott G. Ortman and Bruce A. Bradley

Part 5. Community: The Past in the Present
12. Native American Perspectives on Sand Canyon Pueblo and Other Ancestral Sites ~ Ian Thompson
13. Concepts of Community in Archaeological Research ~ Michelle Hegmon

"This broad-based research effort will provide a model for other projects, in and outside of archaeology."—David Breternitz, emeritus professor of anthropology, University of Colorado