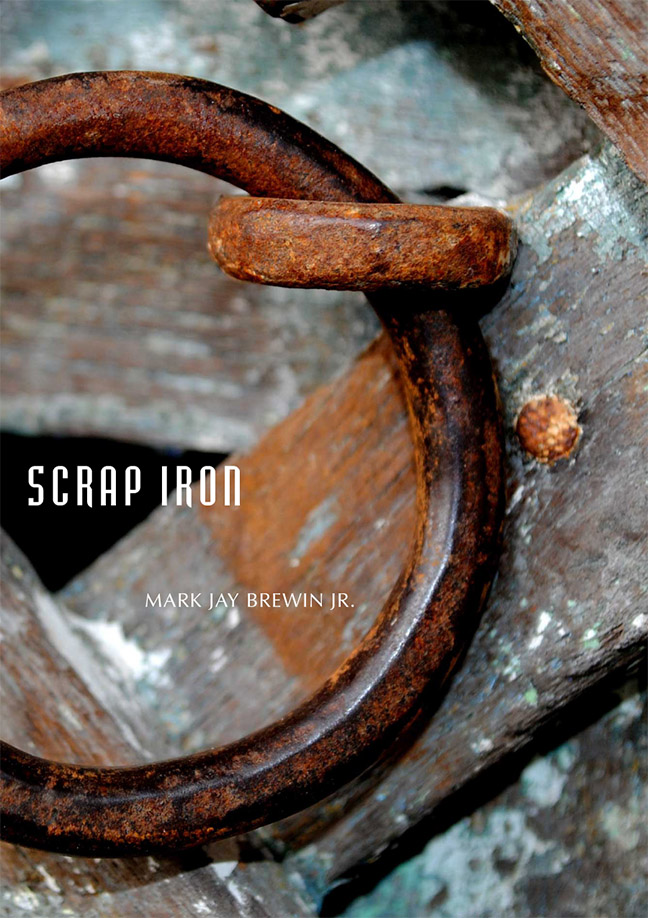 South Jersey farmland, flooded and made an island. Through landscapes and captivating visuals we begin Mark Jay Brewin’s debut collection of poems. Scrap Iron quickly and fluidly moves from this isolated plot of land—the poet’s childhood home—to the memories associated with that place, its people, and his youth. Throughout the volume, Brewin’s attention to sound and cadence offers the reader a burning exploration of beautiful imagery, while also providing a sharp contrast to the sometimes harsh and dark subject matter. He asks how one grows while remaining rooted. Confronting the age-old question of whether one can ever really go home again, Brewin’s soft, prayerful, and thoughtful approach provides the reader with an answer: Whether it is possible or not, the wish to return will always remain.

The intricacies and complexities of human relationships—especially between family members—are at the forefront of Scrap Iron. Brewin acknowledges the tender violence that often exists within familial relationships and highlights the fragility of not only these connections, but of the land, of memory, and of the future. While some poems may focus on tenuous ties, the tone of Brewin’s work as a whole is one of hopefulness. His poetry reminds us that to move is not to abandon, to question is not to criticize, and to love is to at once remember and forget.
Mark Jay Brewin Jr. is a graduate of the MFA program of Southern Illinois University Carbondale. His poems have been featured in Southern Poetry Review, The Los Angeles Review, Poet Lore, Cold Mountain Review, and Prairie Schooner, among others. He  as been a finalist for the Guy Owen Poetry Prize, the 2011 Third Coast Poetry Prize, and the New Letters Literary Award Contest, won the Yellowwood Poetry Contest at the Yalobusha Review, and been nominated for a Pushcart Prize. Mark is currently the poetry editor for the online publication Saxifrage Press.
Table of Contents:

Part II/Volleying Across the Showery Dark
So Intricate, So Inconceivably Complex
On Thunderstorms
Field Lessons
Working First Shift at the Progresso Soups Factory
The Island Meditations
“Dew-matted mornings, I woke to my father”
“Little scissor-snip scars the length of her fingers.”
“So tell me, what’s it like over there? Tell me all about it.”
“The way I was raised ‘ignorant’ only meant rude,”
“It is an art I can only fake—how I prune pine boughs”
“On the Bus-Eirann through Galway City center”
“I have been here for months and still”
“By the very nature of a trip, there is a departure”

Part III/Defending the Entrance to the Hereafter
A Bridge is Like a Tongue
The Same Idea
Hounds
On Garages
Letter About My Last Night in Carbondale, Illinois
Seven Places I Have Found My Grandmother In The Last Six Years
Conversion
Blackrock Diving Tower
Turkey Point

Praise and Reviews:
“Mark Jay Brewin Jr.’s debut collection is a burnished interrogation into the complexities of who we are—a collection that attempts to map the vexed intersection of the American myth of self-invention and the competing conviction that we are also somehow indelibly stamped by the family and the landscape from which we have risen. In the tradition of Phil Levine, Brewin is a poet who does not shy away from the difficult and the real, from the troubling issues of economics, class, and gender. Yet his achievement is housed neither in indignation nor certainty. We know he knows he doesn’t have the answers. If his images shine out like a glinting edge of scrap metal, we are all the more moved by the earnest dedication with which he picks through the messy, unanswerable  questions lurking below.”—Kathleen Graber, author of The Eternal City
“Brewin is a master of a narrative poem. Working with the unreliability of human memory, he weaves stories from both history and the rough landscape he knows well. Readers will be drawn into his stories without ever getting lost in his images of landscapes and people. Indeed, walking away from this collection, you may find yourself wringing rain water from your clothes and looking for rust on your hands and metal splinters in your skin.”—Karen J. Weyant, Winter Poetry Pick (from http://www.karenjweyant.com/)