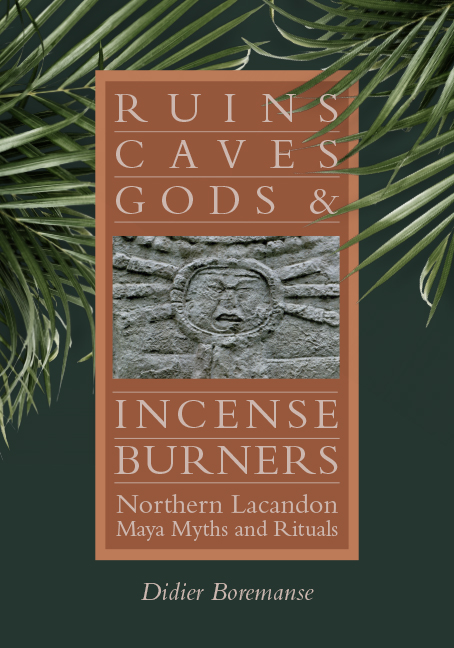 The Lacandon Maya are a small-scale forest society currently on the brink of extinction. Small groups of Northern Lacandon escaped evangelization by dispersing into the jungle, moving from the Guatemalan Petén to Chiapas in southern Mexico during the seventeenth, eighteenth, and nineteenth centuries. Several groups maintained their traditional religion until the late twentieth century.

Their cult of incense burners, based on the veneration of Maya ruins and funerary caves and the deities these effigy censers represented, remained free of any Christian influence. Some ceremonies were vestiges of more complex rituals believed to date back to pre-Columbian times. In this volume, Didier Boremanse explores Lacandon beliefs and traditions he observed during the many months of fieldwork he did, spanning four decades.

Throughout the book Boremanse makes Lacandon values and worldviews accessible to readers from western cultures. Rituals are described and explained with extracts of the celebrants’ prayers that were tape-recorded, transcribed, and translated. Other elements of religious oral tradition are included, including incantations, chants, and the myths and beliefs that sustain the rites. Boremanse also discusses how larger social change influences religious change, both through economic means and outside influences. Most of the myths retold in this book have never been published in English. Photographs show rites that are no longer performed and shrines that no longer exist.
Born in Belgium, Didier Boremanse received his PhD in social anthropology at the University of Oxford. From 1979 until 2006 he taught anthropology and sociology at the Universidad del Valle de Guatemala, and from 2007 until 2013 he taught at the Foundation Edward Seler of San Luis Potosi, Mexico. He is now an independent researcher.
Table of Contents:
List of Figures
List of Tables
Preface
Acknowledgments
1.  Introduction
2.  Origin Myths
3.  Shrines, Censers, and Deities
4.  Offerings of the First Fruits of the Crops
5.  Sin, Expiation, Divination, and Propitiation
6.  The Balche’ Ceremonies
7.  A Naabilil Balche’ Ceremony Performed at a Boy’s Initiation
8.  The Renewal of the Incense Burners
9.  Eschatology and Funerary Rites
10.  Northern Lacandon Religion in a Changing World
11.  Concluding Remarks
Appendix A: Collections of Censers of 19 Men (1974)
Appendix B: Notes on Southern Lacandon Maya Religion
Appendix C: Origin Myths
Notes
Bibliography
Index
Praise and Reviews:
“Builds on more than a century of ethnographic research and is written by one of the last ethnographers who could do so, as the ritual practice described has disappeared. It also complements the author's previous published research and provides a synthesis of all work done on Lacandon myth and ritual.”
—Charles Andrew Hofling, author of the Lacandon Maya-Spanish-English Dictionary

“The detailed cultural information and explanations make this book so important and so different from similar works on Maya myths and folktales. The author’s knowledge of Lacandon culture and his insights on their myths and religion are truly admirable. His descriptions and analyses are nuanced and complete.”
—Joel Palka, professor of anthropology and department head, University of Illinois at Chicago

“Ruins, Caves, Gods, and Incense Burners is an excellent and novel addition to a fairly robust corpus of ethnographic data concerning the Lacandon. The book’s strengths lie in its utility to other researchers, including archaeologists, and its careful attention to detail and nuance.”
—Ethnoarchaeology