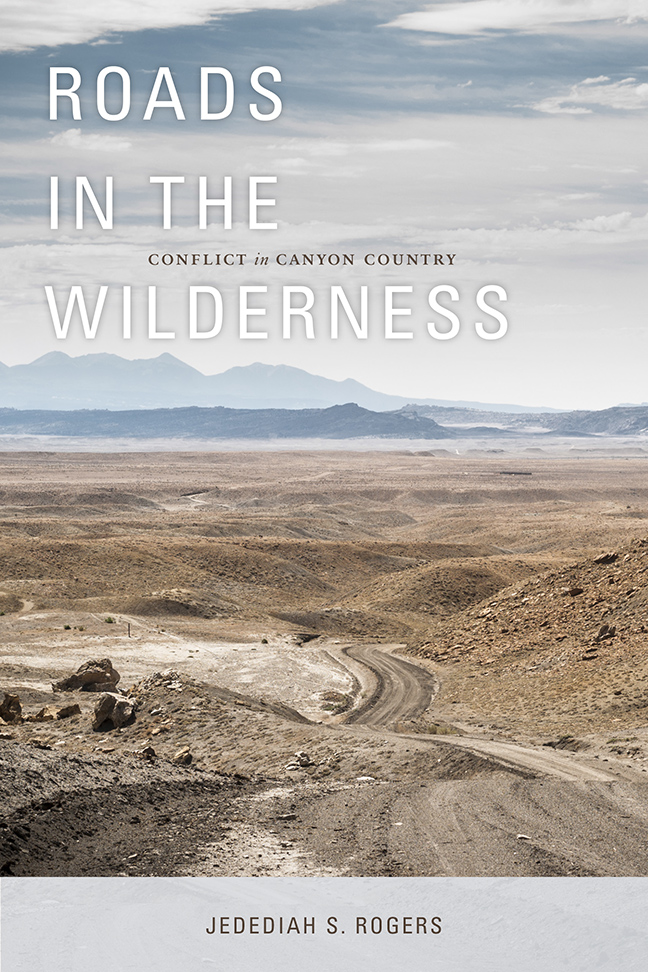 The canyon country of southern Utah and northern Arizona—a celebrated desert of rock and sand punctuated by gorges and mesas—is a region hotly contested among vying and disparate interests, from industrial developers to wilderness preservation advocates. Roads are central to the conflicts raging in an area perceived as one of the last large roadless places in the continental United States. The canyon country in fact contains an extensive network of dirt trails and roads, many originally constructed under the authority of a one-sentence statute in an 1866 mining law, later known as R.S. 2477. While well-groomed and paved roads came to signify the industrialization of the modern age, twentiethcentury conservationists have regarded roads as intrusive human imprints on the nation’s wild lands. Roads connect rural communities, spur economic growth, and in some cases blend harmoniously into the landscape, but they also fracture and divide, disturb wildlife and habitat, facilitate industrial development, and spoil wilderness.
Rogers reflects on the meaning of roads amid environmental conflicts that continue to grip the canyon country. Transporting readers from road controversies like the infamous Burr Trail battle to the contentious web of roads in Grand Staircase–Escalante National Monument to off-roading in Arch Canyon, Rogers demonstrates how the conflicts are deeply rooted in history and culture. The first permanent Anglo-American settlers in the region were Mormon pioneers and current views about land and resource use in southern Utah often derive from stories about how those pioneer ancestors defied wilderness to found their communities in the desert. Roads in the Wilderness will be of interest to environmentalists, historians, and those who live in the American West, challenging readers to think about the canyon country and the stories embedded in the land.
Jedediah S. Rogers received his PhD in American history from Arizona State University and is a historian with Historical Research Associates, Inc. in Missoula, Montana. He is editor of In the President’s Office: The Diaries of L. John Nuttall, 1879–1892, winner of the Evans Handcart Award from Utah State University and the Best Documentary Book Award from the Mormon History Association.
Table of Contents:
List of Illustrations
Prologue
1. Stories of Origin
2. Abbey’s Road, Black’s Highway
3. Roadless in Negro Bill Canyon
4. Posturing on the Burr Trail
5. Abundance and Scarcity in the Book Cliffs
6. Heritage on the Grand Staircase-Escalante
7. Off-Roading in Arch Canyon
8. Making a Desert Landscape
Epilogue
Acknowledgments
Notes
Bibliography
Index

Praise and Reviews:
“A fresh and engaging contribution to environmental history, especially for its interpretation of the Mormon cultural heritage as a driving force for the economic development of the Utah hinterlands. Rogers’s work shows how cultural imperatives arising out of the nineteenth-century settlement period, including memories of the 1879 to 1880 Bluff–San Juan expedition, gave roads their lasting and significant meaning in the minds of many contemporary residents.” —Frederick H. Swanson, author of Dave Rust: A Life in the Canyons
"[Roger's] argument is compelling; there is certainly a great deal to learn about the wilderness movement through the study of road development... Roads in the Wilderness is sure to engage historians, environmentalists, engineers, and anyone with a connection to southern Utah’s backcountry, and all are sure to share Roger’s hope: 'We can yet work for a middle way.'"—Utah Historical Quarterly
“Refreshingly, unlike authors with an ax to grind, Rogers treats fairly and evenly the views of developers and county commissioners, like San Juan County’s Calvin Black, and those of environmental activists and authors, like Edward Abbey.”—CHOICE
"This book is a must-read for anyone who identifies with and frequents southern Utah's rugged canyonlands."—BYU Studies
"By exploring these complex and sometimes irresolvable questions, Rogers opens up the road debates, laying groundwork for future research that may indeed help solve some of these problems faced by southern Utah.”—The Journal of Mormon History