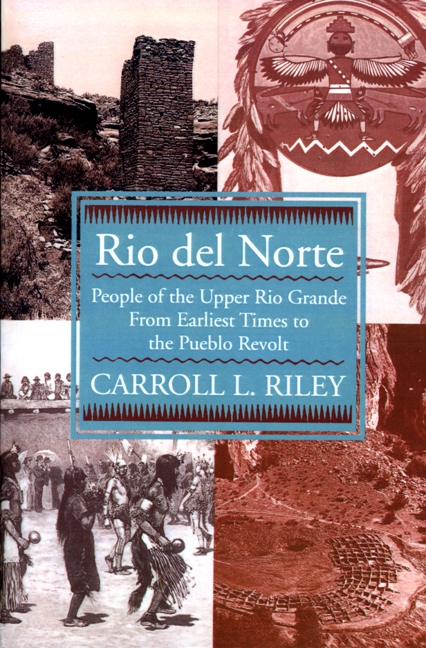 Beginning with the mammoth hunters of eleven millennia ago, Carroll Riley adeptly eaves the threads of twelve thousand years of continuous history through the introduction of agriculture, the rise of the Basketmaker-Pueblo (Anasazi) people, and the extraordinary "quickening" that occurred along the Rio Grande and its tributaries as the Anasazi era ended.

At that time large towns appeared, some holding several thousand people who practiced irrigation-based agriculture, maintained complex social and political organizations, and had a rich artistry. This "golden age" was continuing when Spaniards contacted, then colonized and missionized the region. In 1680 the Pueblos joined in a powerful record and ousted the invaders. Although the Spanish returned, the Pueblos have maintained important parts of their cultural heritage to the present.

Table of Contents:
List of Illustrations
Acknowledgments
Preface
Introduction
1. What's in a Name?
2. Sun, Rain, and Growing Things
3. The First New Mexicans
4. Small Societies in a Large Land
5. Setting the Scene
6. The San Juan Co-Prosperity Sphere
7. The Golden Age
8. 1492 on the Rio Grande
9. A Storm in the South
10. Edging Northward
11. Spain Reaches the Rio Grande
12. The Tiguex War
13. Turk and the Pecos Plot
14. Coronado's Failure
15. A Short Freedom
16. Return of the Spaniards
17. Occupation
18. A Century of Change
Sources and Commentary
Index of Initial Citations
General Index
Praise and Reviews:
"A must for anyone who wonders what civilization might have become in the Southwest had Europeans not intruded."—Tony Hillerman
"At last we have a single, well-documented volume, an exhaustive resource for scholars and for interested lay readers on Pueblo life before the arrival of Europeans to New Mexico. Riley's excellent writing style and narrative interpretation of scholarly sources...make the text an excellent and enjoyable read."—Colonial Latin American Historical Review
"An excellent account of the dynamic characters of southwestern environments and their collective impacts and interactions with human populations and adaptations."—CHOICE
“Engaging. Riley offers much useful information to persons unfamiliar with southwestern history.”
—Kirkus Reviews
“A provocative synthesis that will appeal to students and general readers while, at the same time, offering enough controversial theories to stimulate professional debate.”
—Books of the Southwest
“A smooth and reliable translation.”
—Southwestern Historical Quarterly