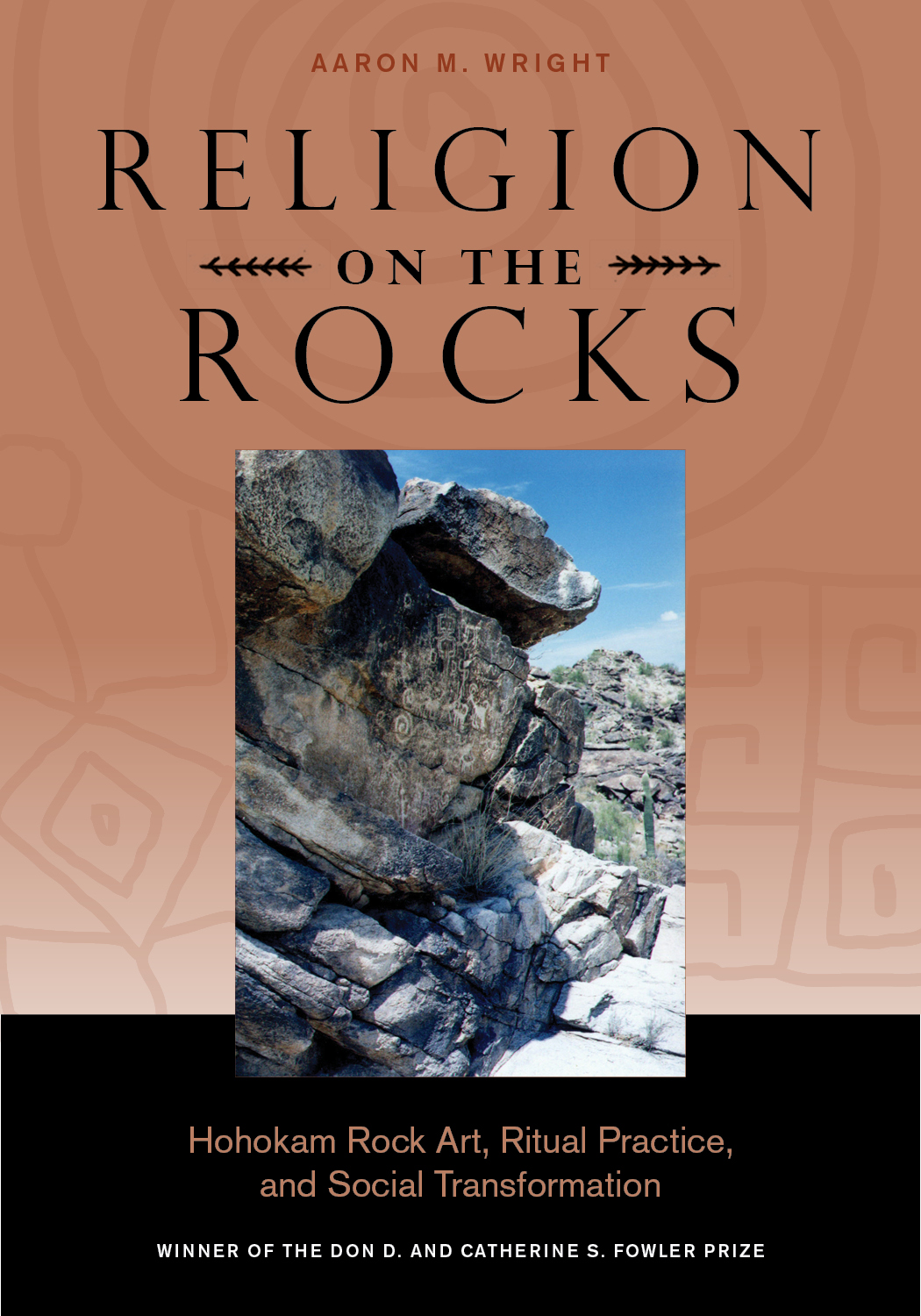 Winner of the Don D. and Catherine S. Fowler Prize

We are nearly all intrigued by the petroglyphs and pictographs of the American Southwest, and we commonly ask what they “mean”. Religion on the Rocks redirects our attention to the equally important matter of what compelled ancient peoples to craft rock art in the first place. To examine this question, Aaron Wright presents a case study from Arizona's South Mountains, an area once flanked by several densely populated Hohokam villages. Synthesizing results from recent archaeological surveys, he explores how the mountains' petroglyphs were woven into the broader cultural landscape and argues that the petroglyphs are relics of a bygone ritual system in which people vied for prestige and power by controlling religious knowledge. The features and strategic placement of the rock art suggest this dimension of Hohokam ritual was participatory and prominent in village life. Around AD 1100, however, petroglyph creation and other ritual practices began to wane, denoting a broad transformation of the Hohokam social world. Wright’s examination of the South Mountains petroglyphs offers a novel narrative of how Hohokam villagers negotiated a concentration of politico-religious authority around platform mounds. Readers will come away with a better understanding of the Hohokam legacy and a greater appreciation for rock art's value to anthropology.
Aaron M. Wright is a former preservation fellow with the Center for Desert Archaeology (now Archaeology Southwest) in Tucson, Arizona. His research interests include indigenous Southwest ritualism and religion, rock art, and paleoclimatology. He is coeditor (with Timothy Kohler and Mark Varien) of Leaving Mesa Verde: Peril and Change in the Thirteenth Century Southwest.

More about the author: The Making of a Preservation Archaeologist
Table of Contents:
List of Figures
List of Tables
Acknowledgments

“His work provides one of the few recent pieces of research that integrates study of rock art into a sound anthropological approach and does not fall back on a simplistic notion of shamanism. In addition, this work covers new ground and represents a real contribution to Hohokam archaeology. This book goes beyond just archaeological interest. It provides a good case study for ritual practices in a context of social organization and will inform scholars in the broader anthropological and sociological realms.” —Paul F. Reed, preservation archaeologist, Archaeology Southwest

“A landmark production offering a dynamic new synthesis of the Hohokam as it establishes new strategies for future research integrating rock art with social, religious, and political processes.…Beautifully and clearly written, engaging the reader from start to finish, Religion on the Rocks, winner of the Don D. Fowler and Catherine S. Fowler Prize, deserves space on the bookshelf of every Southwestern archaeologist.”—KIVA: Journal of Southwestern Anthropology and History

“Southwestern archaeologists, especially those with particular familiarity with Hohokam prehistory, rock art scholars the world over, and archaeologists with a keen interest in prehistoric religion and research methods that elucidate these ancient practices will appreciate this work, and benefit from Wright’s intelligent treatment of what others have sometimes mistaken for a facile subject matter. For those wanting to up-their-game on any one of these three research areas, the references are extensive.”—La Pintura

“[An] innovative book…. Recognizing the interaction between physical and spiritual worlds, Wright recreates an integrated culture history which examines petroglyphs in relation to agricultural terraces, trails, springs, and hilltops in the South Mountains and beyond.”—Journal of Anthropological Research

“This work stands out for me as a template of how any analysis of a rock art site should be conducted. Wright has maximally exploited all means available to understand the rock art with a multiplicity of views, guided by contemporary scholarship in the related disciplines, but with a corpus in a limited, well defined context. Rather than criticizing the methodology of related disciplines, we should all be embracing them and using the best that they have to offer. Wright has done an exemplary job of this.”—Rock Art Research