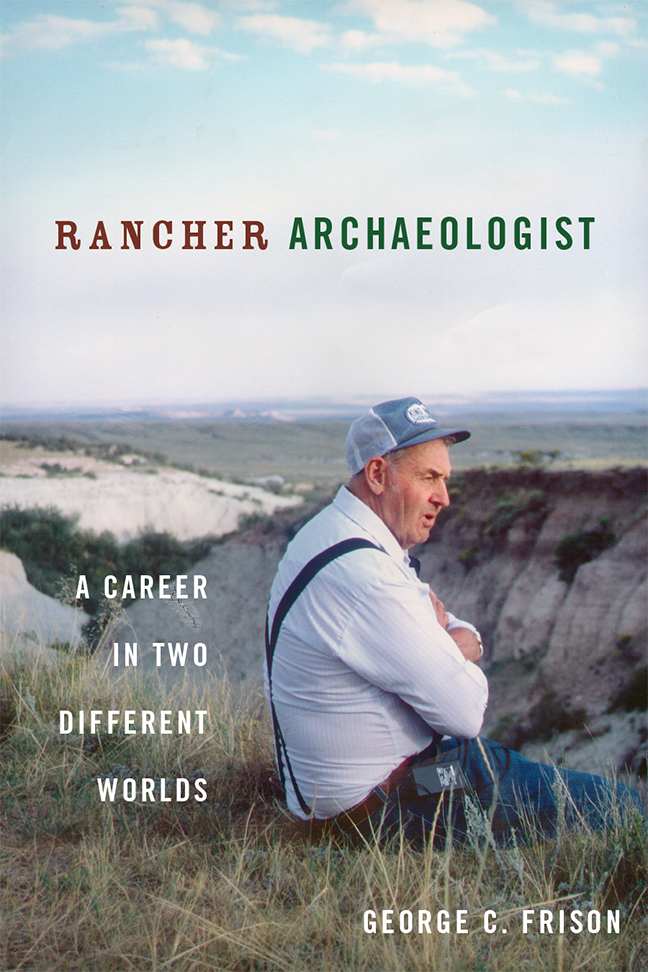 Sometimes childhood events can shape a person’s destiny. Such was the case for George Frison. His father’s accidental death meant that Frison was raised by his grandparents, thus experiencing life on a ranch instead of the small town childhood he otherwise would have had. The wealth of prehistoric artifacts on the ranch caught his attention. Eventually, this interest prompted him to change his life’s course at age thirty-seven.
In this memoir, Frison shares his life’s work and his atypical journey from rancher to professor and archaeologist. Herding cattle, chopping watering holes in sub-zero weather, and guiding hunters in the fall were very different than teaching classes, performing laboratory work, and attending faculty and committee meetings in air-conditioned buildings. But his practical and observational experience around both domestic and wild animals proved a valuable asset to his research. His knowledge of specific animal behaviors gave insight to his studies of the Paleoindians of the northern plains as he sought to understand how their stone tools were used most effectively for hunting and how bison jumps, mammoth kills, and sheep traps actually worked. Frison’s careful research and strong involvement in the scholarly and organizational aspects of archaeology made him influential not only as an authority on the prehistory of the northern plains but also as a leader in Wyoming archaeology and Northern American archaeology at large.
This book will appeal to both the professional and the lay reader with interests in archaeology, anthropology, paleontology, plains history, animal science, hunting, or game management. Frison’s shift from ranching into the academic world of archaeology serves as a reminder that you are never too old to change your life.
George C. Frison is Professor Emeritus of anthropology at the University of Wyoming. He served as Wyoming’s first state archaeologist and as president of the Plains Anthropologist Society and the Society of American Archaeology. He is the author or coauthor of numerous publications including Survival by Hunting, The Mill Iron Site, and Hell Gap: A Stratified Paleoindian Campsite at the Edge of the Rockies with Marcel Kornfeld and Mary Lou Larsen (University of Utah Press, 2009).
Table of Contents:
List of Figures and Table
List of Abbreviations
Foreword, by William “Bill” Woodcock
Acknowledgments
Introduction

Appendix: Milestones
References Cited
Praise and Reviews:
“Although focused on the High Plains, the book tells much about how good dirt and analytical archaeology ought to get done anywhere.”
–Don D. Fowler, Mamie Kleberg Professor of Historic Preservation and Anthropology Emeritus, University of Nevada, Reno

“George Frison is one of the leading prehistorians (if not the leading prehistorian) who has worked on the northern Plains, and his influence extends well beyond the limits of his geographical expertise. Frison elevated the study of prehistoric hunting technology, notably among Paleoindians, to a rarefied behavioral and even theoretical level.”
–J. M. Adovasio, Mercyhurst Archaeological Institute

“Rancher Archaeologist does not disappoint and will appeal to avocational and professional archaeologists, as well as historians, ecologists, game managers and big game hunters and the lay public....The book goes far beyond a personal story. It is simultaneously a chronology of High Plains prehistory and an account of the evolving discipline of archaeology in Wyoming in particular and North America in general.”—Canadian Journal of Archaeology

“George Frison’s autobiography is a good read and one that should be digested by all students, as well as professionals, with an interest in the prehistory of the Upper/Northern Plains and Paleo-Indian archaeology. The volume is not just an interesting personal biography of one of American archaeology’s giant figures, but is a tour de force on the archaeology of the Upper Plains. . . . The book should be on the shelf of every Plains archaeologist and anybody involved in the study of the prehistoric hunting technologies for which Frison is so well known.”—Southwestern Lore