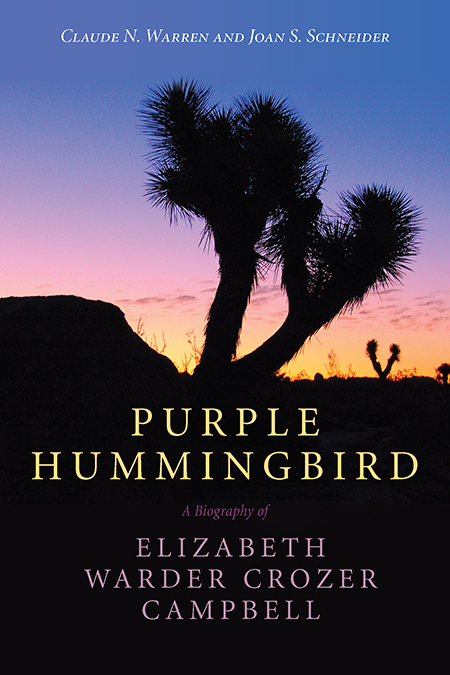 Elizabeth Warder Crozer Campbell and her husband, William Campbell, found themselves forced to move to the Mojave Desert in 1924, its dry climate proving to be the best for William’s frail lungs burned by mustard gas in World War I. They camped at Twentynine Palm Oasis in what is now Joshua Tree National Park, homesteaded nearby, and became a central part of that early community. Life in the remote, stark landscape contrasted sharply with Elizabeth’s early years of wealth and privilege in Pennsylvania. Her resilient spirit made the best of what at first seemed like a bleak situation: she became an amateur archaeologist and explored the desert. A keen observer and independent thinker, she soon hypothesized that prehistoric people had lived in the California deserts along the shores of late  Pleistocene lakes and waterways much earlier than was then believed. She devised a means for testing her hypothesis and found evidence to support it. Her interpretations, however, conflicted with the archaeological paradigm of the day and she was dismissed by formally trained archaeologists. Even so, she and her husband continued their work, convinced of the accuracy of her findings. Four decades later the archaeological establishment validated and accepted her ideas. Campbell’s research ultimately revolutionized archaeological thought, forming the basis of today’s landscape archaeology.

1. Why a Biography of Elizabeth Campbell?
2. The Purple Hummingbird
3. Growing Up a Crozer
4. Betty and Bill at the Twentynine Palms Oasis
5. Life as Homesteaders in Twentynine Palms
6. The Beginnings
7. A Scientist Takes Flight
8. The Great Lake Mojave “Debate”: Intellectual Transitions
9. The State of Early Man Studies in California in 1937: A History for Curious Readers
10. Lake Mojave: The View from Twentynine Palms
11. The Death of Bill in 1944 and the Aftermath
12. The Purple Hummingbird Comes Home to Rest: The Later Years

“The authors’ incredible breadth of knowledge on the region’s early archaeology is evident. Their book will aid future researchers in understanding the history of archaeological research in this area.”
—Heidi Roberts, founder and director of HRA Incorporated, Conservation Archaeology

“Evoking a very different era of archaeological exploration, Warren and Schneider tell the story of a true pioneer in understanding the deep history of the California and Nevada deserts. Lacking any formal academic training, Elizabeth Crozer Campbell transcended chauvinism and professional rivalries to develop unique insights into the relationship of landforms, sites, and human behavior. A must read for anyone interested in the developmental stages of American archaeology and how some researchers achieved reasonable chronological controls before the advent of radiometric dating.”
—Mark E. Basgall, Professor of Anthropology, CSU Sacramento