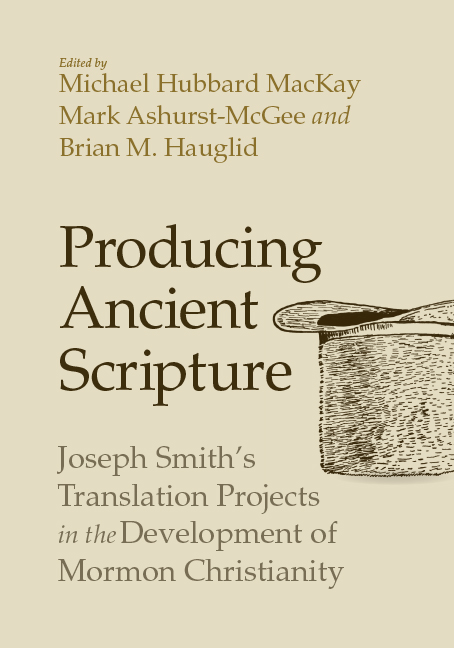 This collaborative volume is the first to study Joseph Smith’s translation projects in their entirety. In this carefully curated collection, experts contribute cutting-edge research and incisive analysis. The chapters explore Smith’s translation projects in focused detail and in broad contexts, as well as in comparison and conversation with one another. Authors approach Smith’s sacred texts historically, textually, linguistically, and literarily to offer a multidisciplinary view. Scrupulous examination of the production and content of Smith’s translations opens new avenues for understanding the foundations of Mormonism, provides insight on aspects of early American religious culture, and helps conceptualize the production and transmission of sacred texts.

Click here for a link to the virtual book launch!

Michael Hubbard MacKay is associate professor in the Department of Church History and Doctrine at Brigham Young University and a former historian and coeditor at the Joseph Smith Papers project.

Mark Ashurst-McGee is a senior historian in the Church History Department and the senior research and review editor for the Joseph Smith Papers project, where he serves as a specialist in document analysis and documentary editing methodology.

“A fantastic contribution—both to the field of Mormon studies and to the larger field of religious studies as well. The volume will immediately become the standard work on the subject of Joseph Smith’s translation projects, far and away the best analyses of the topic available.”
—Joseph Spencer, assistant professor of ancient scripture at Brigham Young University and editor of the Journal of Book of Mormon Studies

“The editors are to be congratulated on pulling together an excellent collection of articles by seasoned historians, laying a new, higher foundation for a thorough understanding of Joseph Smith’s translations. This book is essential reading for those interested in an in-depth exploration of Joseph Smith's language and translation projects.”
—Worlds Without End: A Mormon Studies Roundtable
“The comprehensiveness of the treatment of Joseph Smith’s translation projects, the quality and depth of the specific papers, and the way in which many papers confirm or interact with the others in the book, support the assertion that this is currently the most important single work examining the whole of Joseph Smith’s translation projects. For many years to come, anyone attempting to discuss any of Joseph Smith’s translation projects must refer to Producing Ancient Scripture.”
—Interpreter: A Journal of Latter-day Saint Faith and Scholarship
“An impressive collection of essays that offers the most sophisticated, multifaceted, and detailed examination to date of Joseph Smith’s career-long process of translation and his projects in producing new scripture. This landmark study has significantly elevated the scholarly discourse surrounding the nature of Smith’s revelatory process, and the essays of all the participating scholars offer major contributions to the understanding of Joseph’s prophetic methodology. The resulting synthesis of these wide-ranging essays prompts the proverbial saying that the whole is greater than the sum of its parts.”
—The Journal of Mormon History
“The essays in Producing American Scripture are an invitation to engage with the production of texts in early America to far more scholars than simply those specializing in early Mormon history. The paperback edition can easily be used as a textbook in undergraduate courses on early American religion and represents some of the best current work in this field.”
—Church History: Studies in Christianity and Culture