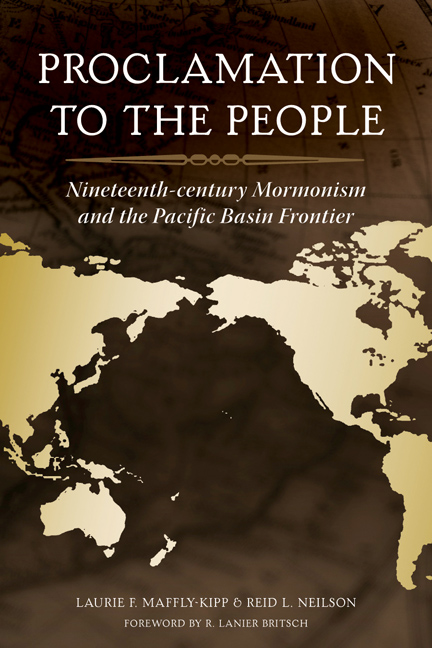 Seven years before leaders of the Church of Jesus Christ of Latter-day Saints (LDS Church) set foot in Utah Territory, they had already breached the Pacific basin by arriving in Australia by 1840.
Scholars have increasingly analyzed the Pacific world (the west coast of the U.S. and South America, the Pacific islands from Hawaii to Tahiti, and from Japan to New Zealand and Australia) as a distinctive region with a unified history. While religion has played an important role in this history, giving rise to a literature on Protestant and Catholic missions in the region, the study of the LDS Church’s expansion into the Pacific has remained largely outside of the bounds of non-LDS study. The Pacific basin has been a crucial part of LDS Church history for nearly the entire lifespan of Mormonism.
This volume brings the Pacific history of the LDS Church into focus in two ways. First, it explores the range and meanings of the church's settlement and movement. Second, it suggests contrasts, linkages, and parallels between LDS and other missionary activities.
Laurie F. Maffly-Kipp is associate professor of religious studies at the University of North Carolina, Chapel Hill.
Reid L. Neilson is assistant professor of church history and doctrine at Brigham Young University.
Table of Contents:

Part Two: Americas
3. The Rise and Decline of Mormon San Bernardino
4. Hoping to Establish a Presence: Parley P. Pratt's 1851 Mission to Chile
5. "A Providential Means of Agitating Mormonism": Parley P. Pratt and the San Francisco Press in the 1850s

Part Four: Australasia
9. The Gathering of the Australian Saints in the 1850s
10. The Mormon Message in the Context of Maori Culture
11. Nineteenth-century Pakeha Mormons in New Zealand

"The volume as a whole is well thought out and is a good selection of theimportant articles on Mormons in the Pacific."—Greg Gubler, professor and university archivist emeritus, Brigham Young University, Hawaii

"All of [the essays] give us a deeper and more complex picture of Mormonism as a tradition developing in relationship to the cultures it encountered and attempted to convert with varying degrees of success. In these essays, Mormonism becomes part of a larger history of Christianity as a diverse and global body of religious traditions."—Church History

"In a telling introduction, the editors...take on the wide vistas of nineteenth-century Mormonism and the Pacific Basin Frontier. This explanation of Mormonism seeks to shed further light on the 'increasingly analyzed' Pacific Basin world."—Utah Historical Quarterly