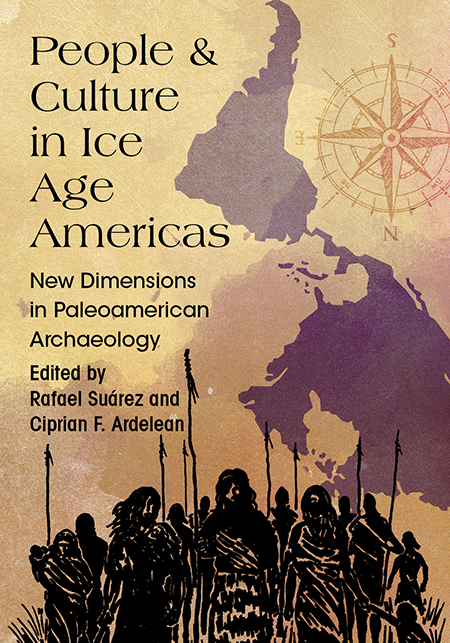 This edited volume, which emerged from a symposium organized at the 2014 SAA meeting in Austin, Texas, covers recent Paleoamerican research and site excavations from Patagonia to Canada. Contributors discuss the peopling of the Americas, early American assemblages, lifeways, and regional differences. Many scholars present current data previously unavailable in English. Chapters are organized south to north in an attempt to shake the usual north-centric focus of Pleistocene–Early Holocene archaeological studies and to bring to the forefront the many fascinating discoveries being made in southern latitudes. The diversity of approaches over a large geographic expanse generates discussion that prompts a re-evaluation of predominant paradigms about how the expansion of Homo sapiens in the Western Hemisphere took place. Those who work in Paleoamerican studies will embrace this book for its new data and for its comparative look at the Americas.
Rafael Suárez is a professor of archaeology at the Universidad de la República in Montevideo, Uruguay, and a researcher within the Sistema Nacional de Investigadores (SNI). His research focuses on the lifeways and adaptations of South America’s Paleoamerican hunter-gatherers and Late Pleistocene–Early Holocene lithic technology in southeast South America.

Ciprian F. Ardelean is a Romanian-born archaeologist who has been working at Mexico’s University of Zacatecas since 2001. He has conducted field investigations on the ancient Mayans and currently leads research projects on early human occupation in the arid regions of northcentral Mexico, focusing on the Pleistocene archaeological record.
Table of Contents:
List of Figures
List of Tables

5. Mobility and Human Dispersion during the Peopling of Northwest South America between the Late Pleistocene and the Early Holocene
Francisco Javier Aceituno-Bocanegra and Antonio Uriarte

6. The Clovis-Like and Fishtail Occupations of Southern Mexico and Central America: A Reappraisal
Guillermo Acosta-Ochoa, Patricia Pérez-Martínez, and Ximena Ulloa-Montemayor

12. Where Tides of Genes Perpetual Ebb and Flow: What DNA Evidence Tells Us about the Peopling of the Americas
Theodore G. Schurr

Contributors
Index
Praise and Reviews:
“The ‘Peopling of the Americas’ is a perennial hot topic that tends to excite broad interest both in the discipline and from the public. I am not aware of any recent book on the topic with the spatial or topical breadth of this important volume, or with the same south to north orientation. People and Culture in Ice Age Americas should be on the shelf of everyone seriously interested in the earliest inhabitants of the New World."
—Daniel Sandweiss, professor of anthropology and quaternary and climate studies, University of Maine

“My graduate students need to have a copy of this book. As a senior North American archaeologist who speaks little Spanish and reads none, I know far too little about the archaeology of South and Central America. This book adds seven chapters to my education concerning invigorating new archaeological research going on in Spanish-speaking regions to the south of us.”
—Dennis Jenkins, senior research associate and director Northern Great Basin Archaeological Field School, Museum of Natural and Cultural History, University of Oregon

“The authors contributing to this volume use a variety of research methods to draw conclusions backed by multiple lines of evidence, in an earnest attempt to re-evaluate our understanding of the early archaeological record across multiple geographic areas. In the end, this robust effort perfectly represents the ideal of what a multidisciplinary field like archaeology should be. For everyone interested in research of the peopling of the Americas will find something of interest in this book.”
—Journal of the Iowa Archeological Society

“An up-to-date and thought-provoking reader on the peopling of Americas, with detailed contributions from some of the foremost scholars on the subject.… People and Culture in Ice Age Americas is an excellent book. In addition to synthesizing knowledge about specific areas and topics, it shows through numerous examples how we can effectively document the stories of the earliest Americans.”
—American Antiquity