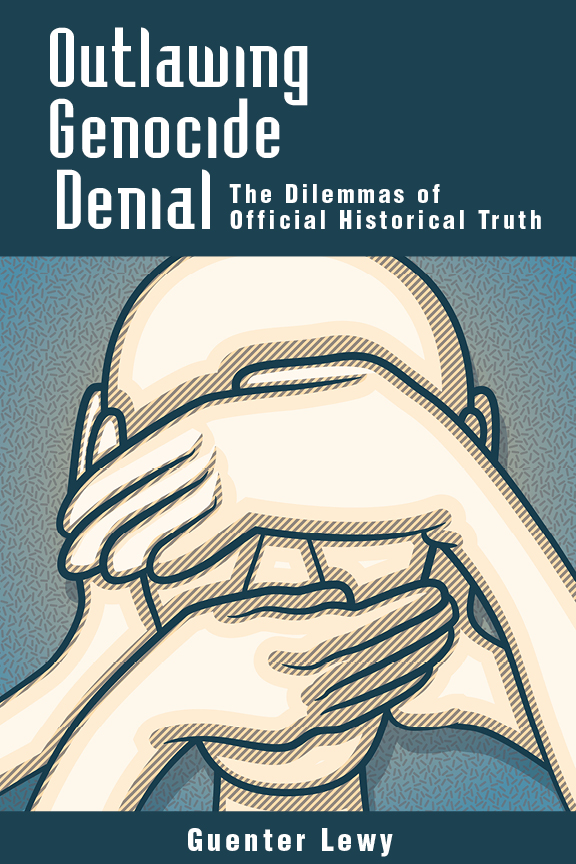 Historian and political scientist Guenter Lewy is no stranger to the topic of genocide nor to exploring controversial issues. His penchant for approaching topics from contentious angles continues in Outlawing Genocide Denial, as he scrutinizes the practice of criminalizing genocide denial.

Holocaust denial can be viewed as another form of hatred against the Jews and preventing it can be understood as a form of warding off hate speech. Germany has made it a crime punishable by law. Other European countries have similar laws. While the rationale for such laws seems reasonable, Lewy asks readers to look again and to consider carefully the dangers that these laws could present. His discussion neither dismisses the ramifications of genocide denial nor justifies it; he instead looks closely at the possible risks of government-enforced interpretations of history.

Outlawing genocide denial sets a precedent of allowing governments to dictate historical truth and how events should be interpreted. Such government restrictions can be counterproductive in a democratic society which values freedom of speech. Lewy examines these and related ideas through the analysis of historical and current examples. He posits his own conclusion but leaves it up to readers to view the evidence and arguments and form their own opinions.
Guenter Lewy is Professor Emeritus of Political Science at the University of Massachusetts Amherst. His books include The Catholic Church and Nazi Germany; The Nazi Persecution of the Gypsies; The Armenian Massacres in Ottoman Turkey: A Disputed Genocide (The University of Utah Press, 2005); and Essays on Genocide and Human Intervention (The University of Utah Press, 2012).
Table of Contents:
Preface
1. Introduction
2. Holocaust Denial Law in the German Federal Republic
3. Holocaust Denial under the Austrian Verbotsgesetz
4. Genocide Denial Law in Switzerland
5. The French Lois Mémorielles
6. The Zündel Case in Canada
7. International Bodies and Genocide Denial
8. Criminalizing the Denial or Affirmation of the Armenian Genocide
9. American Exceptionalism: The Mermelstein Case
10. State-Mandated Genocide Education
11. Conclusion
Notes
Index
Praise and Reviews:
“Lewy’s case studies are inherently interesting not only because they reveal the dangers of political interference in scholarship but also because they demonstrate the length to which Holocaust deniers go to make their specious arguments. Lewy is an experienced writer who knows how to present his findings and interpretations clearly and convincingly.” —Abraham Ascher, author of The Revolution of 1905: Russia in Disarray
“This work is a significant contribution that will be of use to scholars and to scholarly and general readers outside the field. It will serve as an excellent and concise introduction to the subject for students in courses on the Holocaust, genocide, and even historical method.” —Geoffrey Cocks, author of Psychotherapy in the Third Reich: The Goering Institute