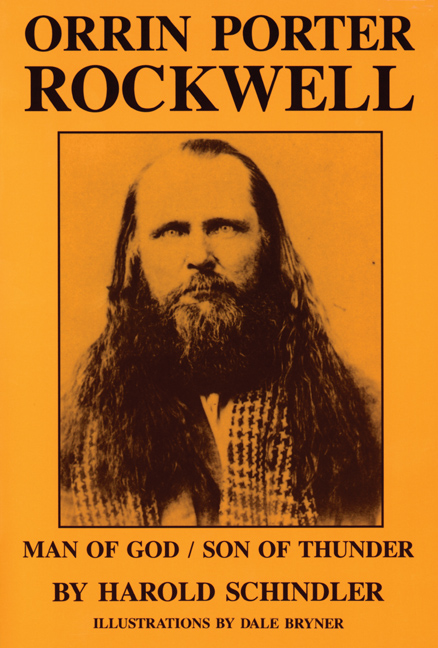 The legend of the Destroying Angel of Mormondom was well established by the time of his death, of natural causes, in 1878. Travelers sang ballads about him as they gathered around their campfires at night. Mothers used his name to frighten children into obedience. He was accused of literally hundreds of murders, all in the name of the Mormon Church.

Yet behind all the myth was a man, a human being. Orrin Porter Rockwell believed in his prophet, Joseph Smith. He spent most of a year chained in an Independence dungeon for his belief, then walked across Missouri to Nauvoo, stumbling into Joseph’s house on Christmas Day. Joseph said to him then, “Cut not thy hair and no bullet or blade can harm thee,” and the legend was born.

Rockwell continued to serve the leaders of his church—as hunter, guide, messenger, scout, guerilla, emissary to the Indians, and lawman. He traveled thousands of miles, raised three families, accumulated land and wealth—and favorably impressed almost everyone who met him. But although he walked with presidents and generals, scholars and scoundrels, in a life lived at the center of many of the great events of the American frontier, he has remained an enigma, a source of continuing controversy.

Harold Schindler’s remarkable investigative skills led him into literally thousands of unlikely places in his search for the truth about Rockwell. Dale L. Morgan, one of the west’s foremost historians, called the first edition “…an impressive job of research, one of the most impressive in recent memory, in the Mormon field. Mr. Schindler has shown great energy and sagacity in dealing with a difficult, highly controversial subject; and he has also made maximum use of the latest scholarship and newly available archival resources.”

But the author was not satisfied until he had probed even more deeply, and this revised and enlarged second edition contains greatly expanded documentation as well as textual additions that flesh out the characters and events of this classic drama of early America.

Harold Schindler has been associated with the Salt Lake Tribune in various capacities since 1945. Shortly after the first edition of this book was published, he became a found (and charter Vice-President) of the Utah Westerners, an organization of scholars, writers, and dedicated enthusiasts founded upon fellowship and a commin interest in the history of Utah and the heritage of the west. In 1967 Orrin Porter Rockwell was awarded the prestigious Award of Merit of the American Association for State and Local History.

Dale Bryner, whose stunning illustrations continue to enhance the narrative of this second edition, is a professor of art at Weber State College in Ogden, Utah. He is a photographer, painter and designer as well, who has worked and studied abroad during seven extended visits, including an entire year's sabbatical in Japan. Recently he has created a number of architectural glass designs for business establishments throughout the Salt Lake Valley.

Preface
Preface to the Second Edition

Praise and Reviews:
"Harold Schindler has attempted to strip away churchly whitewash and Gentile vitriol to reveal Rockwell as he was. At once a Mormon and a trained police reporter, Schindler comes well-equipped for the job. He is dispassionate in an area of American history long marred by partisanship."—Saturday Review
"It is clear that this will be one of the light-bringing books—or maybe one should call them books that clear the muddied waters....We can use it, and more, like it."—Wallace Stegner
"Because of the depth of primary research, ...this account will undoubtedly stand for some time as the standard volume on the subject."—Thomas G. Alexander, Brigham Young University
"One of the best biographies of its kind."—The Los Angeles Times

“Schindler presents an understanding of Porter Rockwell, a tough frontier-coarsened fanatic for cause.”—San Francisco Chronicle
“As the subject emerges from the legendary towards reality in the hands of the author the reader is introduced to a facet of history usually skirted in objective writing. The author neither indicts nor clears Rockwell of the dark deeds laid to his charge by the enemies of the Church who insisted that he belonged to, or perhaps even headed, an avenging Danite group.”—Dialogue: A Journal of Mormon Thought