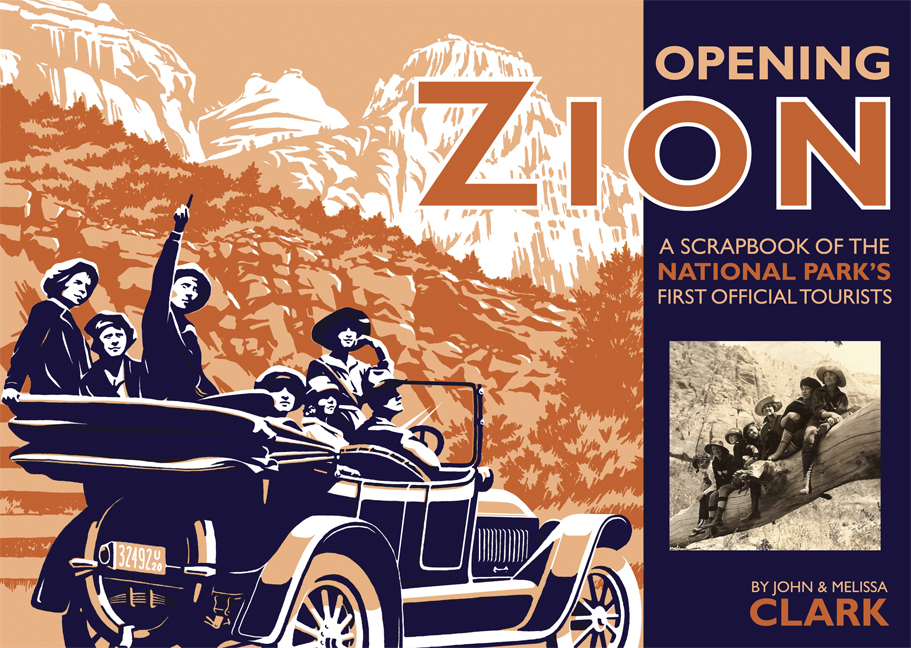 When Melissa Clark purchased a box of old scrapbooks online, she knew only that she had bought something relating to the University of Utah and Zion Park.  What came in the mail was much more than she had expected.  Instead of random mementos, two albums arrived full of photographs and newspaper clippings dating to 1920 that document a trip made by six young women from the University of Utah into the newly formed Zion National Park.  Part of a promotional campaign developed by the Los Angeles and Salt Lake Railroad to advertise its national park shuttle service, the women entered Zion Canyon as its first offical tourists.  When Melissa bought those timeworn scrapbooks she found a forgotten treasure: the opening of Zion.

With text by John Clark, the scrapbooks are now the basis of a one-of-a-kind publication.  Part fashion spread, part adventure guide, and all Utah cultural treasure, Opening Zion is a stunning visual record of the park.  Remarkably detailed black-and-white photographs show the young adventurers scrambling over rocky outcrops, pondering the dizzying height of Zion's sheer walls, and singing camp songs by the campfire.  We are introduced anew to the "gigantic grandeur" of Zion National Park.  As one of the women wrote, "One can think only beautiful thoughts amid such splendor."

John Clark is author of the Motor Tales series and an avid scholar of Utah automobile history.
Melissa Clark is a master of scherenschnitte, or paper cutting. Her work is featured in A Century of Sanctuary: The Art of Zion National Park.
Table of Contents:

"The Clarks seem to me to be among an elite group of modern artists who share a strong connection with the artists and designers who created those powerful national park images of the 1920s."—Lyman Hafen, executive director, Zion Natural History Association