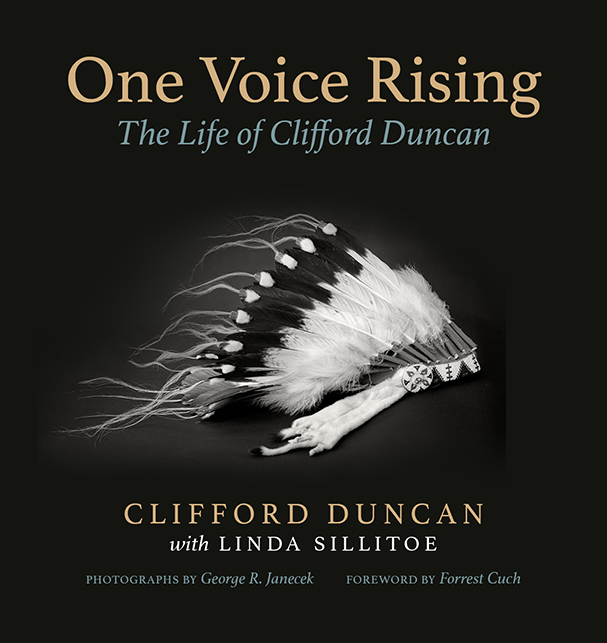 One Voice Rising is a memoir by Ute healer, elder, and historian Clifford Duncan, as told to Anglo writer, Linda Sillitoe. Duncan (1933–2014) was an inspiring leader and a powerful medicine man, and he was, as Sillitoe wrote, “simultaneously one of the most bicultural and traditional American Indians in the West.” Duncan here covers both personal and tribal history during a crucial period in the tribe’s development. His discussions with Sillitoe offer a unique look at individual and societal issues, including the Native American Church, powwows and tribal celebrations, and interactions with the larger world. George Janecek’s photographs of Clifford Duncan and his world expand the impact of Duncan’s words.

“Everything was Indian then, when I was a boy. They had to explain to us about the white man's side. Now everything is in the white man's world and we teach Indian ways.”
—Clifford Duncan (from the book)
Clifford Duncan (1933–2014) was a tribal official and medicine man, a museum director, trained lay archaeologist, artist, U.S. Army veteran, and a leader in the Native American Church.

Linda Sillitoe (1948–2010) was a poet, journalist, and author of both fiction and nonfiction. Her books include Friendly Fire: A History of the ACLU in Utah and Salamander: The Story of the Mormon Forgery Murders (co-authored with Allen D. Roberts).

George Janecek is a widely published and exhibited documentary photographer based in Saint Augustine, Florida and Prague, Czech Republic. His work has been published in multiple books and exhibited internationally.
Table of Contents:
Foreword by Forrest S. Cuch
Preface by Carolyn Janecek
Introduction by Linda Sillitoe
1. Indian Healing Ways
2. Early Reservation Days
3. The Bear Dance
PHOTO ESSAY: The Bear Dance, Whiterocks, Utah
4. Early Childhood
5. Indian Religion
6. The Other Side
7. Change on the Reservation
8. Indian Rodeo
9. Military Service
10. The Sun Dance
PHOTO ESSAY: The Sun Dance, Neola, Utah
11. White Ways
12. City Living
13. Peyote Meetings
14. Modern Living on the Reservation
PHOTO ESSAY: Clifford Duncan at Home
15. Kennedy Years, Johnson Inauguration
16. Father’s Death
17. Medicine Man
PHOTO ESSAY: A Lone Teepee, Neola, Utah
18. Divorce and Remarriage
19. Museum Director
20. The Human Side of Things
PHOTO ESSAY: Artifacts, Heirlooms, and Acquaintances
21. Painting
22. Healing Ceremonies
23. Government and Peyote
24. Powwow
PHOTO ESSAY: Powwow, Fort Duchesne, Utah
25. This Man, Jesus
26. Culture Clash
27. Science and Religion
28. The Return of the Uncompahgre
29. Indian Way and the World
30. The Olympics
31. The Hospital
Praise and Reviews:
“The work's significance is two-fold: the subject is of great current interest and no other work on Ute medicine has been done in the last fifty years. The work is unique for its time and place.”
—Floyd O’Neil, formally Director Emeritus of the American West Center, University of Utah
“A rich reflection of this significant Ute’s individual accomplishments, experience navigating a path that touched both Indian and non-Indian worlds, and interest in creating a ‘bicultural discussion of current issues.’”
—Laura Bayer, coauthor (with Floyd Montoya) of Santa Ana: The People, the Pueblo, and the History of Tamaya
“Offers important insights into the life of an extraordinary man, a Ute man who was highly regarded by many of his people. This work makes a huge contribution as it is one of very few publications dealing with the actual life experiences of a Ute Indian. And it is a publication that draws as much from the past as from the present times.”
—Forrest Cuch, editor of A History of Utah’s American Indians