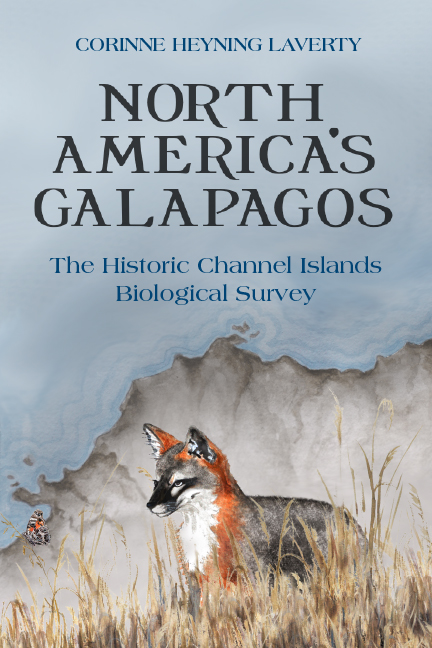 North America’s Galapagos: The Historic Channel Islands Biological Survey recounts the story of a group of researchers, naturalists, adventurers, cooks, immigrants, and scientifically curious teenagers who came together in the late 1930s to embark upon a series of ambitious expeditions never before, or since, attempted. Their mission: to piece together the broken shards of the Channel Islands’ history and evolution. California’s eight Channel Islands, sometimes called “North America’s Galapagos,” each support unique ecosystems with varied flora and fauna and differing human histories. The thirty-three men and women who set out to explore the islands hoped to make numerous discoveries that would go down in history along with their names. More than eighty years ago, a lack of funds and dearth of qualified personnel dogged the pre-WWII expeditions, but it was only after America entered the war and the researchers were stranded on one of the islands that the survey was aborted, their work left for future scientists to complete.

This untold saga of adventure, discovery, and goals abandoned is juxtaposed against the fresh successes of a new generation of Channel Island scholars. Engagingly written, North America’s Galapagos illuminates the scientific process and reveals remarkable modern discoveries that are rewriting archaeological textbooks and unraveling the answer to the age-old question: how and when were the Americas populated?

Anyone interested in the work conducted behind closed museum doors will want to read this book—so will history buffs, environmentalists, scientists, and general readers curious about our world.

Click here for a link to a Ted Talk given by Corinne Laverty.

Corinne Heyning Laverty is a research associate and fellow at the Natural History Museum, Los Angeles County; and an associate of the Santa Cruz Island Foundation; and a member of the exclusive All Eight Club that tracks the people who have ever set foot on all eight Channel Islands. She has published in Western North American Naturalist, Lonely Planet, Eco Traveler, Whale Watcher,and Pacific Currents, among other publications.
Table of Contents:
Acknowledgments
Foreword by Torben Rick
Introduction
1. Big Dog Cave
2. Before Big Dog Cave
3. Juan Rodríguez Cabrillo Spoiled It All
4. The Island of Caves: San Clemente Island
5. Camp Chinigchinich
6. The Rock Island: Santa Barbara
7. The Lost Island: San Nicolas
8. The Search for the Lone Woman’s Whalebone Hut
9. The Lonely Island: San Miguel
10. The King of San Miguel Befriends the CIBS
11. To Rosa, the Mysterious
12. The Forested Island: Santa Cruz
13. The Expedition Continues
14. Fieldwork, First Half of 1940
15. Summer 1940
16. A Flurry of Letters and the End of the 1940 Field Year
17. The Magic Isle: Santa Catalina
18. Early 1941
19. Back at the Museum
20. Hue and Cry
21. An Unmeeting of Minds
22. Santa Rosa (Again)
23. Unlucky Thirteen
Epilogue
Appendix
Note
Bibliography
Index
Praise and Reviews:
“A timely, well written, and outstanding book that is sure to be of interest to archaeologists, biologists, museum professionals, and the general public. Both engaging and readable, Laverty explores an important museum collecting expedition and challenges us to think about the importance of museum collections to science and society.”
—Torben C. Rick, Smithsonian National Museum of Natural History
“Conveys an interesting story not only about the history of the Natural History Museum and the Channel Islands Biological Survey, but also on the development of the scientific process from early exploration through today. Many of the scientists featured here loom large in their disciplines and this book brings these people to the attention of the general reader.”
—Amy Gusick, curator of anthropology, Natural History Museum, Los Angeles County
“Well illustrated and engagingly written, the book is an eye-opener to contemporary natural history praxis as impacted by politics and world events, and will have wide appeal not only for those working in the much-changed museum environment of today but general readers as well.”
—CHOICE
“Decorated with in-depth character portraits of the primary players, behind-the-scenes analysis of the politics of funding such an ambitious mission, and plenty of up-to-date information about the science of the islands—particularly related to their archaeological riches—North America’s Galapagos serves as a clearinghouse for understanding our Channel Islands in one narrative sweep.”
—The Santa Barbara Independent
“The book presents a fascinating look behind the scenes of a series of scientific collecting expeditions and should provide enough information about the archeological and biological discoveries on the Channel Islands to satisfy the intellectual cravings and curiosity of any armchair anthropologist or naturalist.”
—Natural Areas Journal